There is a game I like to play. Unlike others who enjoy the challenge of table games such as bridge, or Scrabble, or even dominoes, my favorite game puts me through the paces of exercising my genealogical research skills: I find an abandoned token of family history and try to determine the identity of those who are named in that object.

In this weekend's case, I had just stumbled upon an eighty year old photograph someone had given me in hopes I could determine its original owner. I like to return such abandoned photos to family members of the picture's subject. Thus, I'm now searching for whatever I can discover about the three people featured in a 1940 candid shot taken at the New York World's Fair.

The reverse of the picture postcard identified three names: Frances and Patricia Page, and Bess Parker. Though one of the three people pictured was obviously much younger than the other two, which one was the child, and which two were the ones in conversation as they walked along?

Sometimes, you just have to start with a guess. I've learned to compare family history to algebra: although we aren't exactly looking for a number, we are certainly working to solve for an unknown. We start with a guess, then test that hypothesis. Sometimes, we guess right. Other times, we realize our error and start fresh with a new theory.

This time, my first guess was that the youngest person was daughter of one of the others, so it seemed reasonable that Frances and Patricia would be the most eligible candidates for that relationship. But which one was mother, and which one the daughter? This is where I remember to examine the point of view of the unknown scribe writing the photo's legend: possibly an adult who was friend or relative to one of the adults in the photo. In a case like that, I'd presume such a person would list the mother first, then the daughter.

The immediate result was the William M. Page family in Niskayuna Township in Schenectady County, New York. There, mother Frances E. Page was thirty five years of age and a native of the nearby state of Connecticut. She and her husband were parents of two daughters, one of whom was ten year old Patricia.

What are the chances, I thought, of Frances Page being related to the older woman in the photograph? That was my next step: to follow the William and Frances Page family back through time, to see if there were any connection with Bess Parker. The answer came with a document drawn up only a few years after the 1940 census: William Page's own draft card. There, almost as if knowing I would someday come looking for it, he provided his wife's name as Frances Parker Page.

Since the 1940 census provided Frances' approximate year of birth, I looked for her in the home of her possible mother, Bess Parker. There in South Windsor, Connecticut, I found a young Frances Parker in the home of her parents, Harry V. and Elizabeth Parker, both in the 1920 and 1910 enumerations.

This was encouraging, since the 1940 census had already shown me that Frances was born in Connecticut. Still, there could be multiple people of that approximate age, sporting the same common names. I looked for additional support.

An article in the July 14, 1991, edition of Schenectady's Daily Gazette provided details not only of Frances' memorial service, but a brief story of her life. By then, Frances had recently died in Hartford, Connecticut. The obituary confirmed that she had been born in South Windsor, and that as an adult, she had lived in the Schenectady area in New York for over a decade. The article also confirmed that Frances was the widow of William Page, and was mother of a now-married daughter by the name of Patricia.

The article also revealed that Frances had been a teacher and, along with her family, had spent her summer vacations teaching at the famed Chautauqua Institution in upstate New York.

Because Frances Parker Page's obituary included the updated name of her daughter Patricia, I could then confirm the family connections from another direction. A December 1952 engagement announcement in the Hartford Courant confirmed Patricia's grandparents' names, as they had given a party in honor of the engaged couple. That announcement provided the additional news that Patricia was about to receive her Master of Sacred Music from Union Theological Seminary in New York City.

While obituaries may be viewed with a doleful eye by those bereaved, they sometimes provide their own snapshot of a person's life story. Patricia's story was one which brought to life her passion for music. Harkening back to her childhood summer stays at Chautauqua while her mother taught, her obituary mentioned that her family had "many cherished memories of their summers in Chautauqua."

Even though I learned from Patricia's obituary that she had been serving as a church organist as early as her teen years, it still surprised me to discover that her talent, combined with her family's presence at the Institution, led to her employment to play the carillon at the iconic Miller Bell Tower on Chautauqua Lake.

Granted, though the pieces seem to be falling together quite neatly to propose that the three women in the photo I found were grandmother, mother, and musical daughter we've been discussing here, there are certainly other options. There could as likely have been a mother-daughter duo with Patricia Page as the elder woman. Bess Parker could just as easily have been a friendly neighbor as a relative. No matter the option, though, the best test at this point would be to contact Patricia's now-adult children and ask if this photo belongs to their family. Somehow, I feel the chances are high that the response would be in the affirmative. 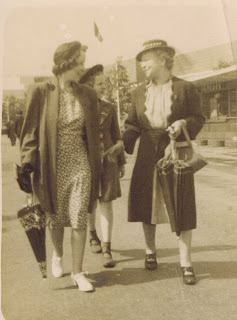 Above image: Photograph postcard from the 1940 New York World's Fair, labeled on the reverse with the names, Frances and Patricia Page, and Bess Parker; postcard now in possession of author until claimed by family member.

© Copyright 2011 – 2022 by Jacqi Stevens at 2:57:00 AM
Email ThisBlogThis!Share to TwitterShare to FacebookShare to Pinterest
Labels: Connecticut, Family Photos, New York