For Their Pal "Charly"

When scouring centuries-old documents for signs of one's fourth great-grandfather, it kinda pulls one up short to see the venerable old man referred to—in legal documents, no less—as "Charly." But that is indeed what was written in the best crumbling old record I could find on Charles McClellan in Camden County, Georgia.

Granted, I'm not yet convinced I'm following the right migration trail, as I attempt to backtrack on Charles McClellan's life before he was last sighted in the 1830s in territorial Florida. Finding record of the marriage of a possible daughter, Margaret E. McClellan, in Camden County, Georgia, was my most promising clue. But what other signs can be found of any McClellans in Camden County?

Since Margaret McClellan's marriage to Benjamin Stephens was recorded there in 1821, the most logical next step would be to look for signs of her father in the 1820 census. When we look there, the results are not promising. There are no McClellans in Camden County's enumeration for that year.

Well, not exactly. There are two possible entries, though, if you are open to the kind of loose record keeping, which has given us variants such as McLellan and McClelland.

It is probably really stretching things to consider as a sloppy McClellan what indexers at Ancestry.com affirmed the 1820 enumerator's handwriting was recording. The verdict at Ancestry? "McClynory."

On closer inspection, my own (unreliable) eyes detected something more akin to "Chas McLenon," similar to the entry right about it for Andrew McLenon. A fold in the paper alongside what looked like a possible meandering tear didn't help matters. I decided to see what other records from the early 1800s could be found online for Camden County.

I turned to FamilySearch.org's catalog, a rich repository of digitized records from around the world. Alas, though clicking to select only records available online, for some reason the many records resulting from my search were available only in person, not online. Too impatient to wait for any apparent glitch to resolve itself—normally things don't work that way on the site—I abandoned the catalog approach and instead opted to select the tab "records" for my search.

While the 1820 census image at Ancestry at its best made reading the surname difficult, it was clear that the given name was abbreviated "Chas." Because the one company's indexer had trouble deciphering the surname, I decided to try the wildcard approach, and searched only for "McCle*" in the surname field.

Right at the top of search results—was FamilySearch now reading my mind after my failed attempts at finding online access to land records in the catalog?—was an entry in a collection called "Georgia Headright and Bounty Land Records 1783-1909." 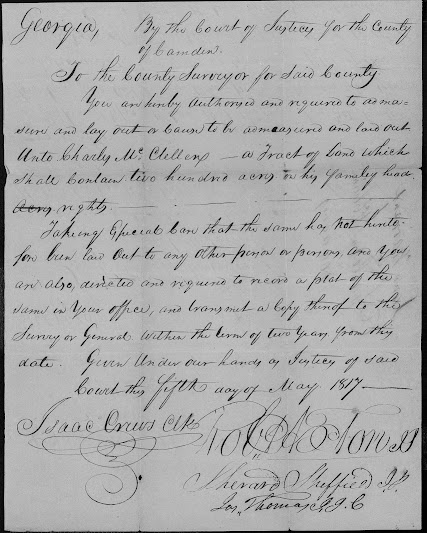 Georgia, by the Court of Justice for the County of Camden,
To the County Surveyor for Said County.
You are hereby Authorized and required to admasure and lay out—or cause to be admasured and laid out Unto Charly McClellen—a Tract of Land which Shall Contain two hundred acres on his family head rights...

The instructions which followed that introduction were written on the fifth day of May, 1817, and were signed by the clerk and three other county officials. One of them, reassuringly, happened to be a familiar name: Sherrard Sheffield.

This becomes a moment in which I finally see Charles McClellan's "F.A.N. Club" coalescing. Sherrard Sheffield was brother-in-law to Job Tison, the Georgia man I mentioned yesterday who requested Charles McClellan to serve as witness to his 1824 will in nearby Glynn County. And it was Job's daughter Sidnah who married Charles' son George, a few years later.

After that point, Charles, George, and both their families moved from that southeastern corner of Georgia for the territorial land of Florida. That, we've already witnessed. But it is in the other direction in which we need our research to take us now. Next week, we'll take a look at what the various McClellans' records show us about where they might have originated before their 1817 documentation in the state of Georgia.

Image: Above excerpt from the 1820 U. S. Census for Camden County, Georgia, showing "Andrew McLenon" and "Chas McLenon" courtesy Ancestry.com; document below from "Headright and Bounty Land Records 1783-1909" digitized record collection at FamilySearch.org.