The Problem With Provenance

A couple weeks ago, I stumbled upon an old photograph in my files, and have no idea where I got it from. As a genealogist, I must have failed in the due diligence category, and am liable at any moment now to be hunted down by the provenance police.

When you look up the definition of a word used in some circles but not in everyday life, the description on the dictionary page may draw a different picture than the image that word conjured in your own mind. Take the word "provenance." Since I run in history circles, I hear that word a lot. But when I look up the definition of provenance, I see explanations like the one given at the Merriam-Webster website:

The history of ownership of a valued object or work of art or literature.

While I appreciate the definition—it was cherry picked from a wide array of online options—I have a problem with it. Yes, we talk about provenance when we trace the journey taken by treasured museum pieces, and certainly when dealing with prized artwork, but for those of us in the family history world, even our collectibles and heirlooms have a story attached to them: the story of where they came from and who passed those items along to us.

And yet...here I sit with a photograph I found, from back during the years when I rescued abandoned family photos from antique shops and sought to return them to the family's descendants. Where did it come from? How did I get it?

I don't think this particular picture was one I bought at any antique store, but I only think I might remember who gave it to me. So much for provenance. In this case, I am sorely lacking in its details.

The photograph did provide some clues as to the three subjects featured. For one, the handwriting on the back indicated a date: June 26, 1940. Then, too, the photographer's identification on the front of the picture postcard revealed a further glimpse into the picture's story. Taken by "Movie Shots," the insignia revealed a connection to "World's Fair of 1940 in New York." 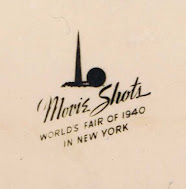 Best part of this black and white picture postcard was the fact that some organized person thought to label the card with not only the date, but the name of the people captured in time, over eighty years ago. One line bore the legend: "Frances and Patricia Page." The following line indicated one more name: Bess Parker.

You know how genealogical research goes: barring the proverbial brick walls that stump every one of us from time to time, one clue leads to another, and finally, produces an answer. Though I have no idea how I got this photo in the first place—alas, my lack of the story of its provenance—tomorrow, we'll check out one possibility for the identity of these three visitors to the 1940 New York World's Fair. 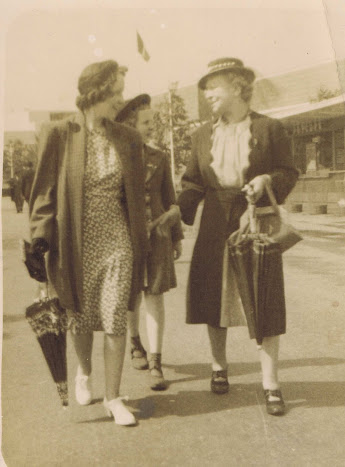 © Copyright 2011 – 2022 by Jacqi Stevens at 2:47:00 AM
Email ThisBlogThis!Share to TwitterShare to FacebookShare to Pinterest
Labels: Family Photos