When two men of the same name are mentioned in the same legal document, it is tempting to assume one is the son of the other. When the jurisdiction in which they are named is a sparsely populated community, it is even more so a temptation. Still, when we discovered the two men by the name of Charles McClellan both being listed as securities for a third McClellan's appointment as administrator for a fourth McClellan man—all in the same county—it would seem likely that we are reading the names of relatives. But let's take some time this week to check this out.

The McClellan man on behalf of whom all this legal business was unfolding was the unfortunate William G. T. McClellan. Following his apparently unexpected death, the Jefferson County, Florida, court appointed a man by the name of Henry McClellan to serve as administrator of William's estate. In this process, it was required that someone serve as security for this man's service, and two additional McClellan men were named: Charles and Charles D. McClellan.

While we can presume that the senior Charles was likely the deceased William's father, what about the other Charles? Not much can be found on the man, but while the few documents found don't necessarily help us draw conclusive connections, they are a start in the right direction.

Whoever Charles D. McClellan was, if he was indeed son of the other Charles, unlike the listing for young William and an Andrew McClellan, by the time of the 1830 census, this younger Charles would have been a mere tick mark on his father's record. It isn't until we move forward in time that we locate a Charles D. McClellan in Jefferson County for the 1850 census.

By then, census enumerations expanded from the age-bracketed tick marks of previous decades to include the name of every resident in a household. That affords us a view of a family setting, likely including a wife (Catherine) and six children. In addition, a twenty year old woman by the name of Caroline Blacklidge provides a possible hint as to Charles' wife's maiden name. 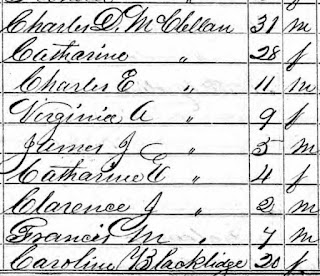 The age of the oldest child in this McClellan household—eleven—permits us to approximate the year in which Charles and Catherine were married, but unfortunately, it doesn't lead us to any verifying document.

We can see, however, that Charles D. gave his age in this 1850 census as thirty one. Thus, in 1830, he would have been a child of eleven in his own father's household. Checking back to that 1830 census for the other Charles, it looks like the age category which would have included an eleven year old indicates there were two boys of that age range in that McClellan household—a possible plus for our contention.

Still, that would mean by the time of William's passing in 1838, Charles D. would have been only nineteen years of age—hardly an appropriate age to stand as security for another man's pledge. And yet, by that year, Charles D. was likely married and expecting his son Charles Edward, who was born the next year.

Verbal reports on census records of such details as ages can be a fluid representation, as we've all realized in chasing our ancestors. Perhaps Charles D. was older than his statement on the 1850 census. Unfortunately, we can't compare his claim with subsequent reports, for he disappeared from the public record by the time of the 1860 census. From that point onward, his wife showed as head of household.

The only other record in which I could find Charles D. was when he made full payment for property on August 10, 1850. In that document, he was specifically identified as "Charles D. McClellan of Jefferson County, Florida." Another record, showing service of a Charles D. McClellan as a private in the Second East Florida Mounted Volunteers in 1837 during the "Indian Wars," also hints at connections to the elder Charles' family, as another McClellan son, George, had served as captain of a company in that same time period. Still, nothing positive to confirm the connection. Just association by geographic region and mutual need.

While the connection between the elder and younger Charles McClellan cannot yet be confirmed, let's take a look at the other man indicated in the letters of administration of William G. T. McClellan's estate: Henry McClellan.

© Copyright 2011 – 2022 by Jacqi Stevens at 2:53:00 AM
Email ThisBlogThis!Share to TwitterShare to FacebookShare to Pinterest
Labels: Florida, McClellan, Wills and Probate