When the Taliaferro family first came to America, they settled in Virginia. The land they arrived at was, at the time, merely a British colony. By the point in the family’s history that brings us to the generation in question for my current brick wall research quandary, some of the family had removed to Georgia.

As I try to determine who my target person—Mary Taliaferro, about to be wife of Thomas Firth Rainey in 1818—might have descended from, one possible clue could come from examining who else was married in the same Georgia county as she. Could the cluster of Taliaferro weddings pinpoint the specific father of this bride?

According to the records accessible online now—and, granted, these are only gleaned from indices on FamilySearch.org, though some digitized records are accessible at Ancestry.com—there were four Taliaferro family members who married in Oglethorpe County between the years 1809 and 1830. Who were they? Who were their parents?

The earliest of the marriage records was for a “Lewis B. Talefaria” who wed Elizabeth Johnson on August 10, 1809. This was likely Louis Bourbon, son of Martha Merriwether and Benjamin Taliaferro.

Louis’ father Benjamin was born in colonial Virginia, and came of age during the years of the American Revolution, for which cause he served as a lieutenant, and during which service he was promoted to captain. After the war—and possibly owing to a falling out with his brother Zachariah (of my direct line) over the hand of a particular young lady—Benjamin left Virginia for Georgia.

Benjamin’s arrival in Georgia, as it turned out, was timely as well. He played an active part in the formative years of Georgia state government. For his service during the thirty five years he lived in Georgia, Benjamin was posthumously honored by the naming of a county in his memory—Taliaferro County. Though he was noted to have died in Wilkes County, his oldest son’s marriage in Oglethorpe County—that of Louis to Betsy Johnson—may well have taken place in the same basic area, since Oglethorpe County was formed from part of Wilkes County.

So we find, from this earliest Taliaferro marriage record in the Oglethorpe vicinity, that it was a record referring to the eldest son of Benjamin. What of the others?

Besides the 1818 marriage of Mary “Talafero”—whoever she was—the next Taliaferro marriage in Oglethorpe County was that of Polly or Sarah “Taliferro.” She, as Sarah, was recorded as becoming the wife of one Hay T. Landrum, according to the 1829 marriage entry. One of the old genealogical publications I’ve referred to, compiled by Willie Catherine Ivey, noted her as “Polly” and indicated that she “married a Mr. Landrum.” She—whether Polly or Sarah—was daughter of Benjamin’s younger brother, Warren Taliaferro (sometimes referred to in genealogies as Warner Taliaferro).

The final remaining Taliaferro wedding in Oglethorpe during this time period was that of Charles, also a child of Warren Taliaferro. While the marriage index shows his bride’s name as Milanda Meriwether, her name was apparently Mildred Merriwether. This wedding followed close on the heels of Charles’ sister’s wedding—on November 16, 1830.

According to Ivey’s Taliaferro genealogy, older brother Benjamin’s youngest daughter was named Mary. However, younger brother Warren—though not having any child named Mary that I can find—was married to a woman named Mary Gilmer. Could it be possible that Warren and Mary named one of their children Mary—but owing to the confusion of having two Marys in the same household, resorted to the use of a nickname? Which of Warren and Mary’s daughters would it be? The only one credited with marrying a Rainey in the Ivey genealogy was listed as Nancy, not Mary. Is Nancy a nickname?

One other detail to consider: this Mary and her husband, Thomas Firth Rainey, eventually had a son, whom they named Warren Taliaferro Rainey. While that seems like a flashing neon light pointing me in the right direction, I’d like just a little more paper-based justification before I accept what seems to be the obvious. 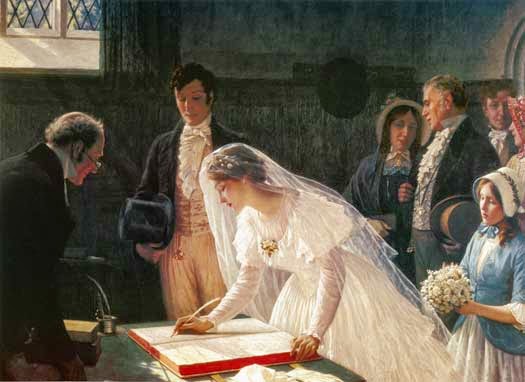 Above: "Signing the Register" by English painter Edmund Blair Leighton; courtesy Wikipedia; in the public domain.
© Copyright 2011 – 2022 by Jacqi Stevens at 2:50:00 AM
Email ThisBlogThis!Share to TwitterShare to FacebookShare to Pinterest
Labels: Georgia, Taliaferro, Weddings