As you move back in time, working through the generations of your family tree, have you ever gotten yourself so tangled up in the ever-increasing strands of your family lines that it left you utterly unable to explain how you got from Person A to Person B?

If I tell you what I need to explain for this next step in my search for the family of my second great grandmother, Mary Rainey, I may leave you in exactly that position. Stunned. Speechless.

Well, ditching all the hyperbole, at least it would leave you lost.

Casting about for the best way to explain what I need to say for this next episode, I’ve decided I simply can’t tell it to you the same way I first encountered it. You see, I snuck in from the back door. But I’ll take you through the main entrance. Perhaps that will make things easier to explain.

Our task right now, in finding Mary Rainey’s roots, is to go through the list of the siblings of her husband-to-be, Thomas Taliaferro Broyles—a South Carolina man whom she married in her home town of Columbus, Georgia, in 1871. The reason we’re checking this list of siblings is to see if we can determine who it might have been that introduced the two. After all, it’s rather a long commute from Thomas’ home in Anderson County, South Carolina, to Muscogee County in Georgia. It’s not like they just met, passing on the sidewalk one afternoon. Something had to have been arranged for them to meet.

First, he was ten years older than Thomas. The beauty of researching large families is that, at any given time in a family unit’s history, there will be some sons going off to college—or to war, or to seek their fortune—while there are other sons still exploring the world at large on all fours in their diapers. Combining all these stages and ages into one family unit can foster those positive aspects of brotherhood that we all admire: older brothers helping younger brothers.

Given the ten year time span between William and his younger brother Thomas, a lot could occur in William’s life while Thomas was still in his mid-teens. That, for instance, would give William enough time to get married, get settled in his own home, and get established in his own network of friends and associates.

The second reason William may be our prime candidate is that, once married in 1857, William and his bride may have settled for a while in Georgia. Georgia is likely a favorable place for an older brother to be situated, if said kid brother eventually hoped to widen his horizons, as far as marriageable young ladies were concerned. Remember, from our vantage point on the other side of history, we already know Thomas fell for a Georgia belle. What we don’t know is how they met.

Third, well, that clanging bell and shrieking whistle you hear are the clues that lurk in William’s wife’s maiden name. She was a Taliaferro. As you may have guessed from William’s brother’s middle name—Thomas Taliaferro Broyles—there seems to be some type of family affinity to that name. Thomas came by the Taliaferro name honestly: his mother was a Taliaferro. William’s wife, likewise, was once a Taliaferro. What is interesting to note is that, in all the published genealogies I’ve been able to find so far, Thomas’ bride-to-be, Mary Rainey, was also said to descend from a mother who was a Taliaferro. But to find any nexus there is turning out to be as tangled a rabbit trail as is the search for Thomas’ and Mary’s matchmaker.

As you may have surmised, I’m actually talking myself through this routine, in hopes that explaining the tangle to myself will somehow loosen these strands so I can see the disparate lines clearly. Some people call this “thinking things through” but I don’t exactly think I’m arriving at the “through” part, yet.

So, to ease my muddled brain, let’s go through this process step by step. First, we’ll see where older brother William was after his marriage to Rebecca Taliaferro in Coweta County, Georgia, on July 28, 1857. Then, we’ll look at the place where they settled next, according to the 1860 census. And finally, we’ll round up that Taliaferro maiden name for William’s wife, Rebecca, and see who her parents were, where they lived, and who they were related to. The hope, of course, is to isolate and finger that one strand—now, hopefully clear of the web of the rest of those tangled lines—and follow it straight back to either the common Taliaferro relative, or to the family that Mary Rainey claimed. Or, if we’re doubly fortunate, to both. 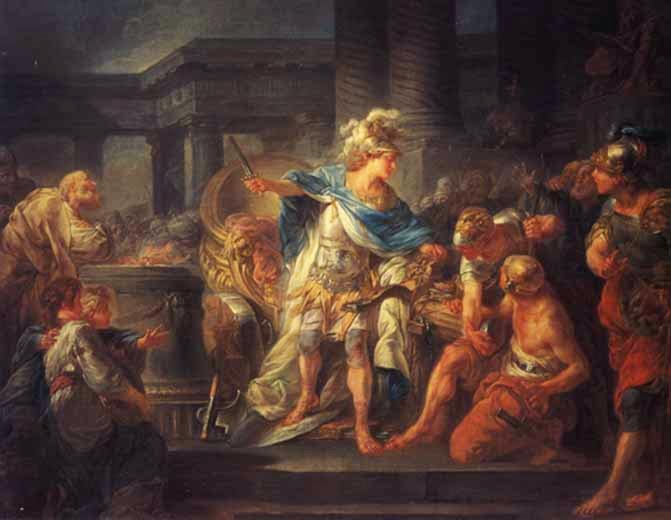 Above: Jean-Simon Berthélemy, "Alexander Cuts the Gordian Knot," oil on canvas; courtesy Wikipedia; in the public domain. While I don't intend to follow suit, sometimes this option becomes tempting...
© Copyright 2011 – 2022 by Jacqi Stevens at 2:52:00 AM
Email ThisBlogThis!Share to TwitterShare to FacebookShare to Pinterest
Labels: A Process Break, Broyles, Georgia, Taliaferro