On our way to discovering who it might be that served as unofficial matchmaker between my second great grandfather, South Carolina native Thomas Taliaferro Broyles, and his Georgian bride, Mary Rainey, I figured the most methodical way to eliminate possibilities would be to go down the list of the seven Broyles brothers and their two sisters. Of course, that path was rife with rabbit trails.

But I warned you.

Here, as promised, is today’s diversion from the task at hand. It has to do with the oldest of the Broyles boys, Charles Edward Broyles’ oldest brother by only a year and a half. Like Charles, a lawyer. Unlike Charles, a confirmed bachelor—thus eminently unqualified to serve as schemer behind his much-younger brother Thomas’ demise marriage in Georgia.

While he was hardly the prime suspect for matchmaker, Augustus Taliaferro Broyles was a well-connected professional in his hometown in Anderson County, South Carolina. Born in 1824 to Ozey Robert and Sarah Ann Taliaferro Broyles, A. T. Broyles (as he was later known) apparently became a formidable attorney whose reputation may actually have outlived him.

At his passing on April 7, 1904, two newspapers outside Anderson County also carried reports of his death. Perhaps, because of his involvement in both law and politics, it was understandable that there would be mention of it in Columbia’s The State, published at the state capital. Predictably, the November 9, 1904, entry appeared in the first column of the seventh page, under the heading, “Deaths in South Carolina.”

Capt. A. T. Broyles
Special to The State
Anderson, Nov. 7—Capt. A. T. Broyles died at his home in this city today at 1 o’clock. He was 81 years old. He was a graduate of the South Carolina college, a captain in the Confederate army and a lawyer of distinction. He served several terms in the legislature, but devoted most of his time to the law. Before advanced age incapacitated him, he was a very active man and considered one of the best informed lawyers in the State. He was never married.

The capital’s leading newspaper, however, did not get the scoop on Charleston’s The News and Courier, which edged out its competitor with a front page article on November 8.

Death of Capt. A. T. Broyles
Eminent Lawyer of Anderson, a Confederate Veteran and a Confirmed Bachelor, Living to the Age of 80 Without Marrying.

Anderson, November 7.—Special: Capt. A. T. Broyles, formerly one of the most eminent lawyers of the State, died at 1.30 P. M., aged 80. Death resulted from the infirmities of age and from an attack of incipient paralysis. Capt. Broyles leaves four brothers and two sisters. He was a member of the Legislature before the war, and during the war he was a lieutenant and later a captain in the 4th South Carolina volunteers. He was disabled and transferred to Anderson as enrolling officer. After the war he entered a partnership with Gen. J. W. Harrison and later with Col. R. W. Simpson, of Pendleton. He was a famous office lawyer and a genius in equity. He never married. The funeral will take place at 3.30 P. M. to-morrow.

One would suppose that the attention paid to this man’s passing might have been the result of his involvement in the Civil War on behalf of his beloved South. After all, inscribed on his memorial, besides the expected, “devoted, faithful son and brother,” was not only a nod to the “lawyer and scholar,” but also to his supporting role for “the welfare of his country.”

Yet, according to a December 1 follow-up in The State, there was more—at least for those readers at the capital persistent enough to discover this entry parked on the tenth page:

Valuable Legal Paper.
Treatise on Wills, Testaments, Etc., by Capt. A. T. Broyles
Special to The State
Anderson, Nov. 30—Capt. A. T. Broyles, who died a few days ago, left in manuscript form a lengthy treatise on wills and testaments and the law of executors and administrators. The manuscript is still in its rough state, death having come upon the aged lawyer before he could revise it for publication. It is not yet known what disposition the family will make of the manuscript. Capt. Broyles was an able lawyer, and the treatise is doubtless one of great value.

Not to be outdone in its coverage of the now-deceased expert on wills and testaments, the very next day, The News and Courier, added their own report on page 6.

Among the personal affects of the late Capt. A. T. Broyles was a manuscript volume upon which he had spent years of patient toil and research, says the Anderson Mail. It was a treatise upon wills and testaments, and the law of executors and administratrices.
Members of the local bar have known for years that Capt. Broyles has had this treatise in course of preparation, and have looked eagerly from year to year for its appearance from the press. It was recognized that no lawyer in the State was more competent to write on the subject, and Capt. Broyles’s marvelous learning and his knowledge of authorities and references were assurances that the book would make one of the most valuable current contributions to legal lore. The book was written out and finished, in rough draft, but had not been copied. It is probable that his heirs will make an effort to put it into shape for the press, but, owing to the illegibility of Capt. Broyles’s peculiar handwriting this will be a tedious and lengthy task. It will be more than worth the while, however, and all practitioners who knew of Capt. Broyles’s ability will be anxious to see his masterpiece given to the profession in permanent form.

Did the book ever get published? A search on WorldCat didn’t seem to reveal any such tome. Perhaps that “peculiar” hand got the best of its copiers. 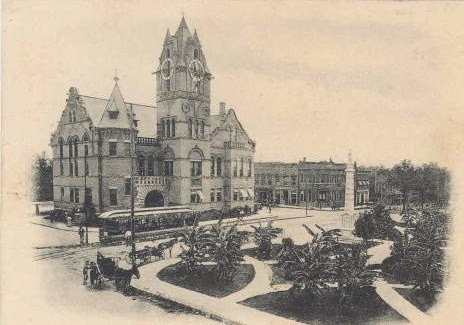 Above: Photograph of Anderson County Courthouse Square, from about the time of Augustus Broyles' passing. Courtesy Wikipedia; in the public domain.
© Copyright 2011 – 2022 by Jacqi Stevens at 2:45:00 AM
Email ThisBlogThis!Share to TwitterShare to FacebookShare to Pinterest
Labels: Broyles, Newspaper Clippings, Occupations, South Carolina