Whatever Became of Mary’s Parents?

Seeking information on Mary Rainey—my second great grandmother, and soon-to-be wife of Thomas Taliaferro Broyles—has been challenging. Granted, tracing her whereabouts via digitized documents has been a boon unlike any experience I’d had in my pre-computer, dusty-archives-crawling days before the 1990s. But still: this ancestor has got what it takes to be a brick wall candidate. Even though I’ve progressed to finding possibilities online, I need to remind myself: these are possible proofs of her existence. I may be totally wrong.

On the other hand, I take my assurances, thinking about that bit of family lore passed down by my mother, years ago. I can just imagine the scenario: my mother, as a young child temporarily being raised by her grandmother, found herself in the same sort of conversation I, a generation later, found myself—asking about her parents. The answer, from my great-grandmother in response to her granddaughter’s question, would of course be about this very same Mary Rainey.

The answer: her grandmother’s mother had been adopted. So, what was there to say?

When I first heard this story, I had assumed the same scenario we now picture when someone tells us that he or she is adopted: the standard closed adoption process where courts seal the agency records and slam the door shut on any possibility of finding one’s true roots. That might very well be the case, if we were talking about someone born in the twentieth century.

I had to remind myself, though, that this person’s mother—my mother’s grandmother’s mother—was not born in the twentieth century. And things before that century were vastly different. Including adoptions.

Sometimes, in previous centuries, parents died young, leaving destitute families behind. Gone were the social services we’ve come to expect now as all-pervasive in our communities. In their place might have been compassionate human services agencies administered by churches or alliances of concerned citizens. But mostly, the “agency” of last resort was extended family: the aunts and uncles and grandparents who would “do their duty” by taking in an extra child, providing a bed and warm meals, likely in return for an extra set of hands helping out around the house or on the farm. If you’ve ever read the oft-mocked children’s story, Pollyanna, you realize that was the premise sending the young heroine on her adventures at the home of her own maiden aunts.

In an era like the 1860s, couple that parental-death scenario with the great disrupter of that decade—the American Civil War—and you likely have a reason why many children became orphans in need of help from compassionate (or at least dutiful) relatives.

In a case like Mary Rainey’s, who would be those likely relatives? Well, they likely would be either Raineys or Taliaferros—especially considering Mary’s mother was supposed to be a Taliaferro, herself. So, finding the young Mary in the household of another Georgia family by the name of Taliaferro would be a good sign. That’s what was so encouraging about finding Mary living with Charles and Mildred Taliaferro in the 1870 census—even though the enumerator represented Mary as merely domestic help in their household.

That discovery also meant Mary’s own parents had to have been gone by that point. So, were they?

If the 1860 census record we had found was the right one for our Mary’s family, it already showed Mary’s mother as head of household. Mary’s father had to have been deceased by that point. Whether owing to a tragic occurrence on account of the war, or for other reasons—I have yet to locate any record of the cause of his death—it turns out that Thomas Rainey, senior, passed away on October 16, 1858. This I know, only thanks to the work of a Find A Grave volunteer, Dianne Wood, who originally set up the memorial on that website for Thomas Firth Rainey, a sixty two year old man buried in Coweta County, Georgia.

Not long after the 1860 census was taken, Thomas’ wife took her place next to her husband at the Johnson Cemetery in Palmetto. She died on March 5, 1863—providing us the explanation for her absence in the 1870 census, and the reason why her younger children Mary and Thomas would be in another family’s household.

Would that be the household of a relative? Only if that mother Mary was a former Taliaferro, herself. 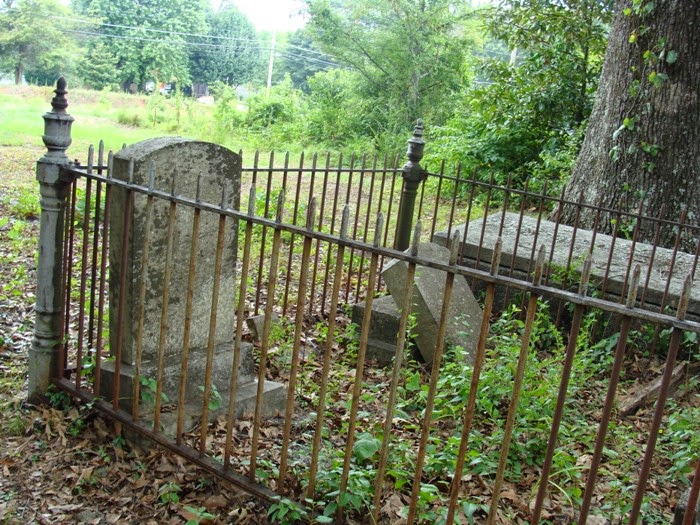 Judging from the list of burials at that small Johnson Cemetery in Coweta County, it may well have been a family burial ground—much like the burials we had seen back in South Carolina for the younger Mary’s future Broyles in-laws—for it is peppered with reoccurring uses of that distinctive “Taliaferro.”

In fact, Mary Rainey’s mother was listed as a Taliaferro, herself. Her memorial on Find A Grave lists her under the entry, “Mary Elizabeth ‘Polly’ Taliaferro Rainey.” Though the memorial doesn’t indicate how that maiden name was verified, one look at the only accessible online index providing marriage records for the era reveals a Thomas F. Rainey marrying a Mary E. “Talafero” on June 9, 1818, in Oglethorpe County, Georgia.


Photograph, above: Rainey family burial plot at Johnson Cemetery in Palmetto, Coweta County, Georgia, from the Find A Grave memorial for Mary Elizabeth "Polly" Taliaferro Rainey; with thanks for permission granted to use photograph courtesy of photographer and Find A Grave volunteer, Dianne Wood.
© Copyright 2011 – 2022 by Jacqi Stevens at 2:42:00 AM
Email ThisBlogThis!Share to TwitterShare to FacebookShare to Pinterest
Labels: Broyles, Cemeteries, Georgia, Taliaferro