It’s a very simple sign that identifies the fenced-in property in Anderson County, South Carolina, as the Simpson Cemetery. Perhaps the lack of fanfare is owing to the land being a family burial ground rather than a public cemetery. Find A Grave, a handy website for obtaining addresses and contact information for cemeteries, provides the location for this place only as “Pendleton, Anderson County, South Carolina.” No address. No street name. You just have to know where to find it.

Today’s rabbit trail will lead us to the story of how the Simpson Cemetery passed out of the hands of the family to its current owners. It all has to do with a friend and associate of Charles’ cousin—and his brother Augustus’ business partner—Richard Wright Simpson.

In the course of his professional life, Richard W. Simpson became the personal attorney of a neighboring gentleman by the name of Thomas Green Clemson. That neighbor had a dream—and he had the means to make that dream happen. He lived on a lovely estate, bequeathed to his wife, the former Anna Maria Calhoun.

If you are anything of a history buff (at least of the South Carolina variety), you may be wondering if there is any significance to the surname Calhoun. There is. Anna Maria was daughter of John C. Calhoun, former South Carolina congressman, senator, and member of the President’s cabinet in various capacities. And seventh Vice President of the United States, under both John Quincy Adams and Andrew Jackson—only one of two men in history so far to serve under two American Presidents.

During his tenure in federal government, of course he and his wife, his first cousin’s daughter Floride Colhoun, took up residency in Washington, D. C., especially at the start of Floride’s reign as “Second Lady,” a role in which she found herself embroiled in the social scandal that later was dubbed “The Petticoat Affair.” Among the other difficulties linked to the fallout of that unfortunate scene, her husband resigned his position as Vice President. Needless to say, the Calhouns soon returned to South Carolina.

The Calhouns’ lovely home in South Carolina was known as Fort Hill. The Greek revival architecture embellished a fourteen room residence, where Mrs. Calhoun was quite content to remain, even after her husband was subsequently elected to the U.S. Senate and returned to Washington. Though she was a capable manager, when her husband died in 1850, she faced a financial need to sell the property to her son and hold the mortgage. When that son died in 1865, Floride filed for foreclosure against his heirs, but in the process died, herself, the very next year.

The claims on Fort Hill embroiled the property in legal disputes for years afterwards, until it was sold at auction in 1872. Somehow, the executor of the Calhoun estate won the bidding war and the property—at least the residence and the majority of the land—ended up in the hands of John and Floride’s daughter Anna Maria.

Ah, I sense you were wondering if this Rabbit Trail was ever going to turn around and gain some momentum.

The Calhouns’ daughter Anna Maria was, by then, wife of Richard W. Simpson’s good friend and client, Thomas Green Clemson. She herself, however, passed away shortly thereafter—in 1875—and willed the property to her husband. (You see, the plot thickens.)

At that stage in Thomas G. Clemson’s life, he was envisioning an educational innovation, and was casting about for a means to make that a reality. A politician himself, he had served for a time as United States Secretary of Agriculture. Though born in Philadelphia, he considered South Carolina his adopted home state, and when he wasn’t traveling abroad, studying innovations in agriculture, he was serving as a strong advocate for implementing these concepts at home.

Having inherited Fort Hill from his wife, by 1886, his mind was made up: he would be the vehicle to jump start a project which was then only in discussion stage in the South Carolina legislature. The concept was that, using the university system of the day—a liberal arts model—was not a suitable academic backdrop for the more practical sciences such as agriculture and “mechanics.”

Through a series of intricate talks with South Carolina governor Benjamin Tillman and others—and through a close, and closely contested vote in the state legislature—a deal was brokered in which, on their part, the state would accept the terms of the will and establish a land-grant institution specifically for agricultural training. On his part, Thomas G. Clemson, now sole survivor of his immediate family, changed his will in 1886 to grant Fort Hill and its property to the newly-established college—a public school, should the legislature choose to accept his terms; private if the South Carolina politicians rejected the offer. By only one vote, the decision went to the affirmative.

By now, those of you familiar with institutions of higher education in the South may have realized that the property in question was the seed planted to found what is now known as Clemson University. But how does all that relate to my first cousin, four times removed?

If you recall, Augustus T. Broyles, the business partner (and, incidentally, first cousin) of Richard W. Simpson, was an expert in matters of last wills and testaments. Likely, so was his associate. It was through the sage advice and skillful maneuvering of Richard W. Simpson that Thomas G. Clemson added the 1886 codicil that stood firm in the face of yet another round of wrangling over the property, as Thomas' own son-in-law chose to contest the Clemson will. Apparently, Simpson defended the case all the way to the United States Supreme Court before it was settled in favor of the newly-established college.

The will showed that Thomas Clemson paid keen attention to detail, naming the governing body that was to launch the fledgling institution. Head of that board of trustees was none other than Clemson’s own personal attorney, Richard W. Simpson—the one who insured that the originating wording stood the test of legal attack, and the one who not only advised the benefactor in making his dream a reality, but after his passing, insured that the spirit, as well as the letter, of his will was carried out.

Richard W. Simpson served as President of that initial Board of Trustees until his death in 1912. Even after his passing, he sought to uphold the spirit of his friend’s gift by donating part of his own property to Clemson College. Today, the former Simpson property is used as Clemson University's agricultural experiment station. At the edge of that property is the Simpson family cemetery where the search for our mutual relatives led me to discover this history.

Nearly one hundred years after Richard Wright Simpson’s passing, the Anderson County Museum designated him as the 2011 inductee into their Hall of Fame. Nearby, on the Clemson University campus, two recently constructed residence halls now bear the name, Simpson North and Simpson South, in honor of his contribution to the establishment of Thomas Clemson’s dream.

I don’t suppose our family connection with attorney R. W. Simpson would have given this current generation of the family any bonus points in the agricultural college's admissions competition. While my daughter’s college major does start with the letter “A,” it wouldn’t quite fall within the right category. But it still makes me proud to know that that family member’s careful attention to detail made the difference for the nearly one hundred fifty thousand students who have since graduated from the dream that became reality, Clemson University. 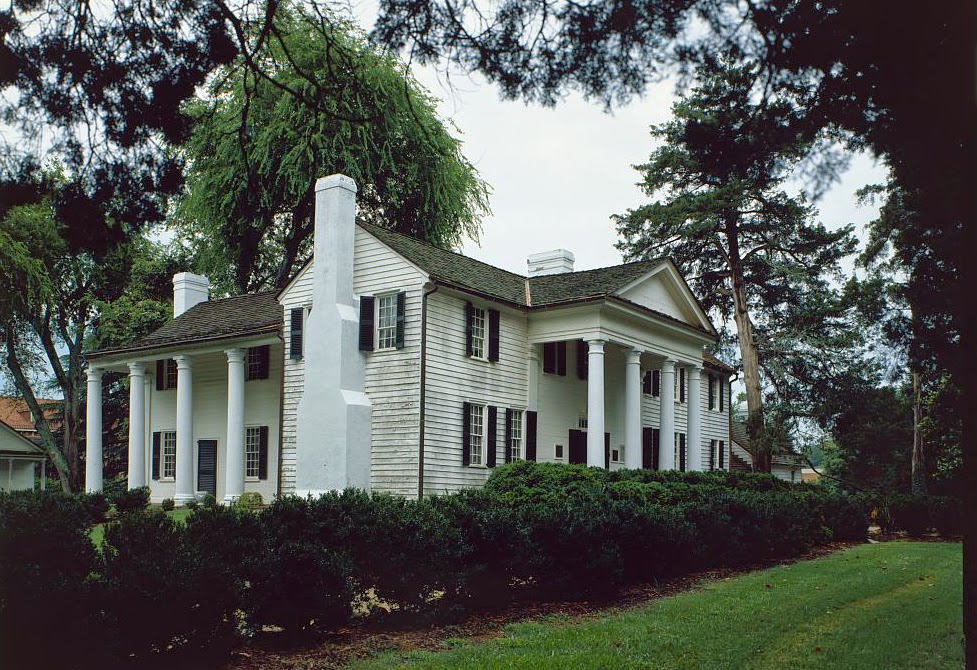 Above: Photograph of Fort Hill, Clemson, South Carolina, from the Historic American Buildings Survey; courtesy United States Library of Congress; in the public domain.
© Copyright 2011 – 2022 by Jacqi Stevens at 2:45:00 AM
Email ThisBlogThis!Share to TwitterShare to FacebookShare to Pinterest
Labels: Broyles, Friends of the Family, South Carolina