I’ll cut to the chase: the moral of yesterday’s story is to never stop looking. Who knows whether the very next search could bring the answer to your question?

Perturbed by my smashing non-success at locating a simple ancestor by the name of Mary—alright, I admit: it was a challenge—I couldn’t quite lay down the quest, even though frustrated. Granted, when a surname has so many spelling variations as to leave me searching for a string that includes more wildcards than alphabetic characters, it does feel like time to give up.

But I couldn’t. I kept staring at that 1850 census result for Coweta County, Georgia. It had all the makings of a promising hit: last name phonetically in agreement with what I was told was my second great grandmother’s maiden name, mother named Mary, and brother named Thomas. It’s just that the ages were all jumbled up.

Rather than trash everything and start again from scratch, I decided to play “What If.” In other words, “What If” I could find the family—or even a portion of them—in the subsequent census? I was game to check.

Searching through the 1860 census possibilities, the only one I could find that remotely matched was a household in Campbell County, Georgia. Not being familiar with the geo-political subdivisions of the state of Georgia, all I could tell was that it wasn’t the Coweta County location where I had previously found a potential match. Nor was it the Muscogee County location of my second great grandparents’ wedding in 1871. 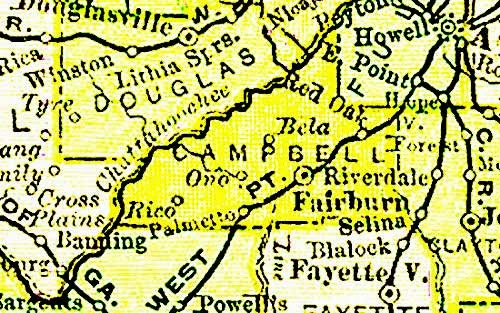 I had no clue even where Campbell County was located. So I looked it up. And no wonder: as of 1931, there is no such thing as Campbell County, Georgia. The county was absorbed, as a cost-saving measure, into Fulton County. For those of you who do know your Georgia geography, you now realize approximately where it was located: near Atlanta.

Actually, though the 1860 census showed residence in a different county than the 1850 census, the distance between the two homes was not that great—only a matter of about ten miles.

There were other differences to note, though. Most significant was the absence of Thomas’ and Mary’s father. Also named Thomas, the elder Rainey had reported his age as fifty three in the 1850 census. For whatever reason, he was totally missing from the subsequent census.

Also missing in this 1860 census—if the families were one and the same—were older son Charles (now about age thirty two) and daughters Sarah (who would now be twenty four) and Mildred (now approaching twenty three). Perhaps these older Rainey children had married and set up households of their own—requiring another search to double check my hunches about these possible relatives.

More significant than that, though, was the absence of daughter Mary. While in the 1850 census, she had shown as a fifteen year old child—and could likely have also been married and removed from the household by now—I had my doubts about any wedding bells in her future. For one reason: there was now a different Mary in the Rainey household.

For whatever reason, the Rainey household—if, indeed, it was one and the same as the one I had located from the 1850 census—now sported a younger Mary. This girl, listed by the name, “Mary W. E.,” showed in the 1860 census at the age of nine.

Voilà! The possibility revives itself! We now have a family constellation which included a son Thomas who was well on his way to becoming the twenty seven year old “clerk” in the Columbus, Georgia, household of Charles and Mildred Taliaferro—and a nine year old Mary who likely was the nineteen year old “domestic” entry in the Taliaferro household, ten years later.

I believe we may have a match.


Above: 1895 Rand McNally map of the former Campbell County, Georgia; courtesy Wikipedia; in the public domain.
© Copyright 2011 – 2022 by Jacqi Stevens at 2:42:00 AM
Email ThisBlogThis!Share to TwitterShare to FacebookShare to Pinterest
Labels: Georgia, Rainey