A Pause At The Halfway Mark 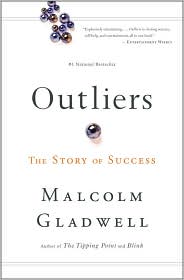 Journalist Malcolm Gladwell once contended that it took ten thousand hours to separate the successful from the mediocre. He staked the success of his book, Outliers, on that assertion.

Sometime last spring, I figured I may as well put in my own ten thousand hours. I’ve always wanted to write. I don’t know if it’s owing to my mother’s dream, but I’ll blame her for that sticky bit of heritage.
I’m not sure what possessed me to hit upon the idea of a genealogy blog, but last May—six months ago to the day—I joined the ranks of over two thousand family history writers and launched A Family Tapestry.
While on my way to blogging in my Gladwell Ten Thousand Hours—and believe me, the halfway mark today is toward my first anniversary, not my hours’ midway point—I noticed that Gladwell made some other points about success. One of those was to remember that what we become is as much a function of our surroundings as it is our own effort. "What we do as a community, as a society, for each other, matters as much as what we do for ourselves,” Gladwell offered in an interview as his capstone statement for the book. “It sounds a little trite, but there's a powerful amount of truth in that, I think.”
On a much smaller scale, I certainly have to admit the same thing for my own experiment. After all, there are precious few people in the world who want to read about the minutiae of the genealogies of Aktabowskis or Puchalskis, for instance. I wouldn’t have been able to write what’s been covered on the variety of surnames here if it weren’t for the help of distant family members who’ve popped up and sent me material from their own collections. It’s been nice having cousins I’ve never met on my team.
I’ve drawn inspiration from others in the blogging world, too. When I first started posting photographs of unidentified relatives, I somehow stumbled upon others whose blogs are dedicated to that very cause. I’ll never forget meeting Far Side of Fifty when I found her blog, Forgotten Old Photos. She was my inspiration, the one who gave me hope that posting these photographs online was not the digital equivalent of the proverbial needle in the haystack.
“I’ll send Iggy over to help you,” she promised. I had no idea who “Iggy” was, but this reader with the moniker, Intense Guy, started posting hints, links and downright prescient discoveries about my mystery relatives—providing another source of inspiration.
I’ve found others doing the same—many, in fact, posting old photographs and postcards, seeking connections. And for all those using the visual as their vehicle, there were others going verbal. I’ve benefited greatly from the genealogy writers’ network at Geneabloggers. I’ve enjoyed the writing journeys of several kindred spirits and have benefited from their encouragement along the way. I’ve even been delightfully blessed to discover a fellow Geneablogger, Sheri Fenley, in my own neighborhood, translating virtual friendship—and plenty of laughs, too—into chats over real cups of coffee.
In my past life, I spent some time in number crunching, and at this half-year point, it’s interesting to see what can be found out about this fledgling journey. So far, it’s been six months with a little over 4,600 hits. Mostly, readers hale from the United States—only ten percent of my page views originate outside this country. Canada places second in the list of top ten nations, and although the United Kingdom and Australia also are included in that number, several others are total surprises to me.
The number of posts receiving top hits is widespread. The post asking for help identifying a military uniform comes in first place; another military post ranks third. Posts with photographs of partially unidentified people (offering location or surname, for instance) rank highly, such as the puzzle of the three ladies in Indiana (second), or the gentlemen from the Midwest (fourth). A post describing how a reader helped solve a photograph mystery ranked fifth, another explanation of solved identity placed ninth. Posts about groups of people, such as family photographs or sweet shots of angelic faces, also placed well.
As much a contrarian as I am, I have my own favorites that were not among those posts ranking high in page views. There are seven posts that are my personal choices—pieces that I enjoyed writing or that were my heartfelt expression about family research, only one of which actually made it to the top ten (Leave Your Mark, which ranked seventh, thanks to the recommendation of a fellow blogger).
My favorites include one that I resurrected from a previous blog life, as well as a couple that speak to the process of blogging, itself. Two of my favorites actually have to do with genealogy issues of family members, one from generations far back, another serving as the prequel to the series that I’ll resume tomorrow. But my newest favorite is one that may become my theme for remembering those who have gone before us in our family history. In remembering backwards, unwrapping the visage of old age that we’ve become too familiar with in seeing our living relatives, I hope to recreate each person as he or she once was in the prime of life: Until Dreams Take the Place of Regrets.
I have much to be grateful for in writing during these last six months. I don’t know how long this blog will continue, or which direction it may take, but at this point, I’m thankful for every reader who has stopped by. Each page view is a message that there was something worth checking out. Each comment is an encouragement from a new friend. A writer is really a performer at heart, and like any performer, needs an audience. But more than a stage, a blog becomes a platform for a community of like-minded students, seeking, comparing notes, encouraging each other to become more of what they can be.
© Copyright 2011 – 2020 by Jacqi Stevens at 2:48:00 AM

Email ThisBlogThis!Share to TwitterShare to FacebookShare to Pinterest
Labels: A Process Break