With today's selection of ancestor from my Twelve Most Wanted, I'm not only halfway through my list—and wrapping up the three candidates from my mother-in-law's tree—but I'm making a choice based on some frivolous speculation.

Just as dangerous a leap as it is to grab for a connection to Charlemagne, or the Queen of England, or Niall of the Nine Hostages—well, maybe Niall and his Y-DNA would be a less speculative connection than the other two—my question that led me to place today's ancestor among my Twelve Most Wanted came from a mere curiosity.

My question is about my mother-in-law's third great-grandmother's father. Confused? Let me place this ancestor in perspective. This third great-grandmother, Mary Carroll, married a man from our thoroughly-researched Gordon line. Thanks to a combination of resources, a whole bunch of us avid Gordon researchers have been trailing that line for decades, so I have plenty of info on Mary's husband, William B. Gordon.

What I don't have is much detail at all on Mary's own family. Somewhere along the line, someone else mentioned the name of her parents, but there is very little to tie such details together for a woman born about 1773.

Knowing Mary Carroll's family was Catholic, I was fascinated to learn that the only Catholic signer of the Declaration of Independence was also named Carroll. I also knew that our Gordons and Carrolls and others in that group of early immigrants had, at one time, settled in Maryland, the location of that famous Carroll, the "First Citizen." Though I knew so very little about that famous Carroll, my curiosity was piqued. I've always meant to learn more—even if that exploration didn't lead to any sign of a connection. After all, it is part of our nation's history.

With that, I may as well see how far back I can push the generations on Mary Carroll's parentage. If nothing else, thanks to the Catholic traditions of documentation, I should have a moderate chance to discover a bit more, at least about our much lesser-known branch of the Carrolls. With hopes to push back the generations on my mother-in-law's Carroll line just a little bit more, I'll be adding Anthony Carroll—the tentative father of our Mary Carroll Gordon—to my list of Twelve Most Wanted for 2020. 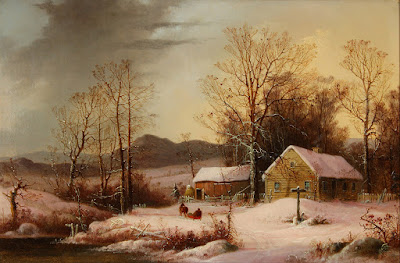 Above: "Farmstead in Winter," 1860 painting by George Henry Durrie, American artist made famous by Currier and Ives lithographic reprints of his many rural winter scenes; image courtesy Wikipedia; in the public domain.


© Copyright 2011 – 2022 by Jacqi Stevens at 2:41:00 AM
Email ThisBlogThis!Share to TwitterShare to FacebookShare to Pinterest
Labels: Carroll, Gordon, Maryland