In a few days, we will begin the new year of 2020. In that year, among other commemorations, will be the celebration of the 400th anniversary of the landing of the Mayflower. On that tiny ship, among all those other significant passengers, was one crew member who turned out to be my tenth great-grandfather. If, by now, you've guessed I'm related to John Alden, you've astutely identified the far side of my research dilemma. However, it's not the beginning of that Mayflower line I'm concerned about, but the distant reaches of his line of descent that teases me by being just out of my grasp.

Here's the reason why: the General Society of Mayflower Descendants provides properly sanctioned resources to trace the five generations stretching from John Alden (and all the other surviving Mayflower passengers) to the level of their second great-grandchildren. In my case, that would lead to Janet Murdock, who married Stephen Tilson (of the well-documented Tilson line). This is all well and good, as long as we stick with those generations in Massachusetts and surrounding areas, but by the time of the next generation—and their son, William Tilson, in particular—the family has removed from those New England colonies to the back end of Virginia.

Ah, you knew Virginia would be showing up somewhere in this saga.

At that point, still during the pre-Revolutionary War era in the 1760s, the line settled in what was then Washington County, Virginia—until some of the family line moved further on. Some family members continued on to Kentucky—or so the report goes—while the branch including my fifth great-grandfather moved only a short distance to settle in the northeastern part of Tennessee by the early 1800s.

Somewhere in all those colonial documents and early church records from the backwoods of Virginia are likely mentions of this family of William and Marcie Tilson, but as far as I can reach from my armchair researcher's spot out in California, I can't seem to put together the necessary paper trail to connect William's granddaughter Rachel, wife of Tennessean James C. Davis, to her rightful place in not only the Tilson line, but also the key line leading all the way back to John Alden and Priscilla Mullins. While I can find hundred-year-old books which, for their own parts, make the assertions which, connected, would lead me all the way back to my goal, I can't find the documentation to bring me clearly from Point A (where I leave off with Rachel Tilson Davis) to Point X, where the Mayflower landed with my tenth great-grandparents.

Hopefully, my strategy to see what resources can be obtained during my January visit to Salt Lake City will conveniently align with my intention to apply for membership to the Mayflower Society before this celebration of the 400th anniversary comes to a close at the end of next year. 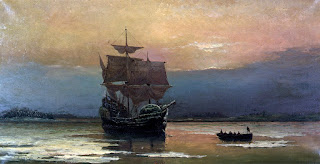