Can a person whose family has been, in some cases, in this country since the early 1700s possibly not know anything about her own great-grandmother? I'd find that impossible—impossible, at least, until I started delving into my own family tree, with all its secrets, missing origins and disguised names. And I have to remember that I'm now working on the family tree of a woman who once told me she was sure it was her own grandparents who had probably just "gotten off the boat." How inaccurate that guess turned out to be.

Except...in one case. After all these years of researching my mother-in-law's family tree, I still can't pinpoint any more information on her paternal grandmother's mother than her name and year of birth and death. And that is all I'll have to work with, as I add Elizabeth Stine to my Most Wanted Ancestors list for 2020.

Here's what I know about Elizabeth Stine. First, that she was listed as Eliza Stine on her 1825 marriage record in Perry County, Ohio, where she said "I do" to someone labeled as Jacob Snyder—probably James Jacob Snyder, son of German immigrant Nicholas Dominic Schneider. Second, that she was likely born in Pennsylvania, arriving about 1808, based on census reports. Finally, that she probably died as a widow in Perry County, Ohio, in 1881.

Elizabeth Stine Snyder represents the oldest of my mother-in-law's most recent ancestors for whom I have such a little bit of information, other than the basic dates and regions. Though I know of no enticing story about her, or any research tidbits that would either intrigue me to pursue her or repel me from the pursuit, I feel as if I owe it to myself—not to mention my in-laws—to try my best to learn more about this next-to-invisible woman ancestor. 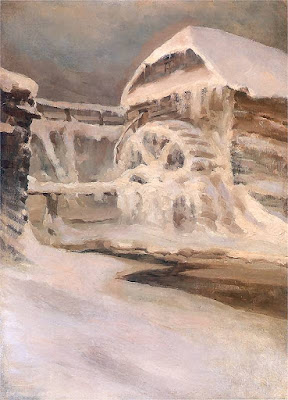 Above: "Mill in Winter," 1897 oil on canvas by Polish artist Ferdynand Ruszczyc (1870-1936); image courtesy Wikipedia; in the public domain.