While Aaron Broyles may have died with a wife named Frances, that doesn't necessarily mean he began married life with a woman by that name. Could this South Carolina man have gone to Tennessee to find a wife in his younger years?

The answer to that question might determine whether Frances Reed was the mother of my third great-grandfather, Ozey Broyles. Born in South Carolina in 1798, Ozey followed at least three older siblings who also were said to have been born in the same state.

There was, however, a gap in ages between Cain and Jemima, the oldest two children, born in the late 1780s, and the rest of the Broyles children who followed, beginning with the 1796 arrival of Polly, the sibling just older than Ozey. The gap of years between Jemima's birth in 1789 and that of Polly in 1796 could suggest the death of one wife and marriage to a second—or, it could signify the loss of one or possibly two other children of the same woman.

The other claim of a wife for Aaron Broyles, however, placed the marriage in Greene County, Tennessee, about one hundred fifty miles directly to the north of our Aaron's home in Anderson County, South Carolina. That wedding—of Aaron Broyles and a woman by the name of Nancy Davis—was solemnized by a ceremony in December of 1797.

You see my predicament. If this were really the Aaron Broyles who was father of my Ozey, then whoever his wife was in 1797 would surely be the same woman giving birth to a child just one year later.

There was also another reason why I couldn't just discard this information, based solely on geographic restraints. While the distance between the two counties crossed state lines, it is not like there weren't any other Broyles members of this family's genealogy in Tennessee. In fact, in his younger years, my second great-grandfather, Ozey's son Thomas Taliaferro Broyles, was sent from his South Carolina home to tend to property owned by his father in Washington County, Tennessee—not far from Greene County.

Fortunately, by looking forward to the future after that 1797 marriage, we can still find an Aaron Broyles with his wife Nancy in Tennessee in the 1850 census. And, by 1850 in South Carolina, the other Aaron was very much...dead.

So, we can feel quite confident—and without much of a drawn out explanation—that the Aaron who married Nancy Davis was not one and the same as my fourth great-grandfather, Aaron Broyles, despite the many online trees insisting that is so. But that brief detour into the realm of double identities shows us one other reality: there were enough Broyles cousins in Virginia, South Carolina, and Tennessee to yield us duplicate—and possibly triplicate—instances of the same names in subsequent generations.

That's where it became handy for me to stumble upon an unpublished manuscript of one researcher's efforts to sort out the extended Broyles family—to trace it back to its founding immigrants, in fact, and beyond, to a town in Germany. That manuscript, as we'll see tomorrow, has thankfully been digitized and available online for anyone to use. The only caveat: as many others have noted, the work does contain mistakes. Still, it can be valuable to us as much as a trailblazer is to those who have never journeyed that way, back through the family history trails, before. 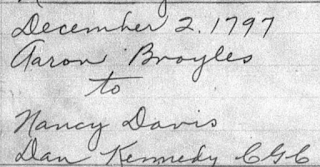 Above: Marriage entry in the Greene County, Tennessee, records for an Aaron Broyles and Nancy Davis on December 2, 1797; image courtesy FamilySearch.org.
© Copyright 2011 – 2022 by Jacqi Stevens at 2:53:00 AM
Email ThisBlogThis!Share to TwitterShare to FacebookShare to Pinterest
Labels: Broyles, South Carolina, Tennessee, Virginia