On Her Way Home


Well, I can't exactly say it is going to her home, but Baby Fay is now finding her way back to family. If I have this correct, her photograph will soon be in the hands of her grandson. But first, there will have to be one additional stop: to the home of this grandson's sister-in-law, the researcher whose tree on Ancestry.com led me to contact her this week.

As has happened before on this new quest to reunite abandoned photographs with family members, it has been an encouraging and inspiring connection that evolved with this week's email contact. Of course, it always starts out no different than a sales cold call. Since I wouldn't make such a good sales person, the prospect of cold calling stops me in my tracks; if it weren't for the mission behind the contact with total strangers, I'm not sure I could pull it off.

There is, however, a compelling reason behind making these connections: I always think of how I wish someone would find a photograph of one of my ancestors. I'd be delighted with the news! I realize that, because those of us who delve into genealogy share the same outlook about our heritage, I have a good chance of connecting with someone—stranger or not—who feels exactly the same way as I do.

It's just that, this time, I wasn't sure how close the family connection might have been. As I mentioned yesterday, on this particular family tree, I couldn't tell how closely related the researcher was to Baby Fay or the Randall or Panuzzi families. Maybe this researcher wouldn't be interested. Maybe I'd never get a response. After all, that has happened before, with the series of photos I found for Alta Barnes and her family.

In less than twenty four hours, I had a response from the researcher, who, as it turns out, had put up the tree online for her brother-in-law. The two of them talk frequently and their families get together often. She would be glad to pass along the photograph to him.

Not only that, but this fellow genealogist shared an experience she had which proved inspiring to me. While she hasn't done quite the same as I am doing with orphaned family photographs, she found herself sharing in a similar way.

One day, she had been browsing in an antique store, and was looking over some old books when she noticed a "very nondescript looking book." It had a very plain looking new book jacket, but when she flipped it open, she realized it was something very different than what the cover indicated.

As she explains it,


when I opened it up it was a very old Bible and it had generations of marriages and births and deaths in it.


Some of the dates in this Bible reached back into the 1700s. I could so relate to what she mentioned next:


I was so taken by it that I had to find who it belonged to and I was able to find through the last known entry the family that this Bible belong to and was able to contact them just like you contacted me.


The killer was that the family Bible hadn't just ended up in the antique store because someone didn't want it. On the contrary, according to this researcher, the owner


found out that the Bible has been accidentally left in a box full of donated books when the person who was in charge of it...ended up having to move.


What was irrevocably lost through mishap was inexplicably retrieved through one of those random acts of genealogical kindness—the hallmark of a community of researchers who believe in giving back. Perhaps that's why this researcher remarked that she and I are "kindred spirits." The experience made such an impact on her that she now makes it a practice to "always look at the books with the plain binding."

As this researcher observed in her email to me, "It makes the heart feel good when you’re able to get back something that belonged to somebody."

So far, in rescuing these few photographs I've found over the past year, I've found that to be true, myself. The response has always been so positive. And there certainly is no lack of supply of hundred year old photographs containing enough clues to send them back home. 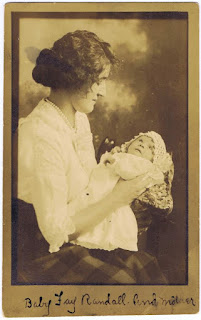 © Copyright 2011 – 2022 by Jacqi Stevens at 2:46:00 AM
Email ThisBlogThis!Share to TwitterShare to FacebookShare to Pinterest
Labels: Family Bibles, Family Photos, Giving Back, Panuzzi, Randall