We're about to explore the possibilities for identifying another mystery photograph subject. This time, our task will not be simply to return one old photograph back to family members, but four—and possibly more. The key will be to determine whether the name added to the back of each of these photographs is one and the same, and whether several different handwriting samples were all referring to the same woman.

There's no way to gradually introduce the suspected subject of this search, so I will start out with the splat: the photograph of the one woman which included not only that unusual given name—Thirza—but a surname as well. As I mentioned last Friday, I suspect the name which links each of these photographs will either refer to one person or to two. The handwriting on some clearly spelled out Thirza. The shaky hand on the others sometimes looked like Thiega.

I found all of these photographs in an antique shop in Jackson, California, a northern California town sometimes remembered for its former glory days as part of California gold rush country. One of the photographs came with the imprint of a studio in Greeley, Colorado; the others had no geographic location specified. The time span represented by these pictures likely included more than one generation of a family—if, indeed, these are photographs from the same extended family. The earliest one I'd guess to be from the 1870s or possibly earlier. The most recent one was a portrait of Thirza with a handwritten note on the reverse, "about 1920."

That, unfortunately, was one of the pictures with the name that looked more like Thiega than Thirza, but the handy thing about it was that it came with a surname: Cole.

I decided my first attempt at identifying the subject was to go with the name from the majority of the other photographs, and start out with the assumption that the person I want to research was named Thirza Cole. Whether that will turn out to be a false lead, we'll soon find out. Kept in balance by the handwritten names affixed to the front of the other photos, I'm going to trust in the FAN principle—Friends, Associates and Neighbors—to either corroborate my assumptions or rule them out entirely. 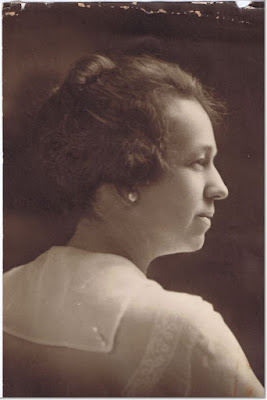 Above: Photograph of a woman named either Thiega or Thirza Cole, with the added notation, "about 1920." Found in a northern California antique store, the photograph was evidently removed from a frame to which it had been taped. The photograph as shown here is cropped from its original size. The damage visible at the top of this scan of the original was mild, compared to the damage across the lower border. Photograph currently in possession of the author.
© Copyright 2011 – 2022 by Jacqi Stevens at 3:00:00 AM
Email ThisBlogThis!Share to TwitterShare to FacebookShare to Pinterest
Labels: California, Cole, Colorado, Family Photos