In researching the identities of the photographs in Thirza's collection, it would be quite handy if each of these people grew up to marry each other, or turned out to be cousins, or some other convenient and handy resolution to my research problem.

Apparently, that is not the case. The only nexus that I've been able to find, so far, is a link to the state of Colorado. Neighbors in Greeley, perhaps, but nothing more.

I can't help but think, though, that surely there is a story line weaving its way in and out of the three families we've discovered so far in this odyssey through Thirza's photograph collection. Perhaps at some point we'll discover it, but for now, it's a well-kept secret.

So we'll move on to the next photograph. Today's picture is the faded photograph I referred to the other day, one which makes me think it was taken much earlier than that of baby Mildred. This one, of the head and shoulders of a young man, bears no date or location. Though I don't know enough about photograph trends to date the style of the composition, I had thought this was an earlier type of photograph, perhaps from the 1880s, as opposed to the turn of the century date for Mildred's picture.

In a hand similar to the writing on the front of Mildred's photograph, someone had inked in the name Ralph Pollock. Just having a full name was a great help. However, trying my hand at locating a suitable census entry for someone with this man's name brought up too many possibilities. For one thing, the handwriting on the face of the card made it difficult to tell if the surname was Pollack or Pollock.

Time for a fuzzy search, I tried my hand at some guess work: what if Ralph was from the same town as Mildred? Figuring out Ralph's age and the date of the picture might make a big difference in finding the right Ralph, but it was worth a try.

Of course, to explain how I stumbled upon what I found, finally, will take another post, for there was another step in between these two that landed me on a page in a census record with a clue that nearly reached out to slap me in the face. Besides that, we have one more baby picture to examine before we arrive at that step.

In the meantime, let me introduce to you a young Ralph Pollock—yet another person whose likeness was sent with Thirza's name written on the reverse. 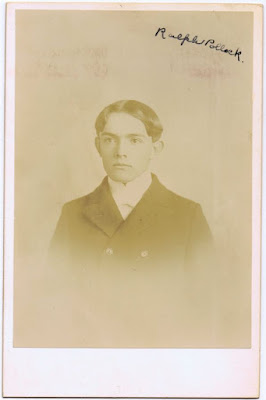 Above: Photograph of a young Ralph Pollock, from the collection of Thirza Cole. Undated and without any indication of location, this photograph is currently in possession of the author.
© Copyright 2011 – 2022 by Jacqi Stevens at 2:49:00 AM
Email ThisBlogThis!Share to TwitterShare to FacebookShare to Pinterest
Labels: Cole, Colorado, Family Photos, Pollock