Searching for Brown. Or is it Browne? Or Browns? Time to activate the wildcard search technique.

Thirza may have been just the right touch of unusual as a given name, but its coupling with a surname as simple as Brown—or whatever spelling permutation it had taken over the years of governmental documentation—complicated the matter.

In order to find a descendant interested in receiving the family photographs I had rescued from an antique store up in California gold rush country, it was beginning to look like I'd need to push back another generation.

We had already discovered that Thirza and William Cole's only child, Pauline, had died in the 1920s. Of the other photos linked to Thirza's collection by her telltale first name affixed to the reverse, I had yet to figure out the identity of Baby Louise of Salida or Mildred Rigg from Greeley, Colorado—to say nothing of Ralph Pollock, the young man from who knows where.

That left me with Thirza and her two sisters—Nellie and Mable—and a surname as common as Brown. To find the sisters in a census record all in the household of their parents was going to be a challenge. For one thing, the 1920 census revealed that Thirza was born about 1879 in Colorado—hopefully, an accurate enough report to place her in the 1880 census. As for her sisters, though, the soonest they would be enumerated would be in the 1900 census, as Nellie was born about 1883, and Mable in 1886.

Problem: by 1900, Thirza was married with a daughter of her own. I'd either have to opt for a Brown household with daughters claiming names as common as Nellie or Mable, or look for Thirza the one-year-old.

I went with Thirza.

This was one of the reasons I became thankful for that unusual given name. There aren't too many Thirzas around—not even Thirza Browns.

Remember the baby photo Thirza had in her collection from Greeley, Colorado? Well, it turns out that there was a Brown family, complete with one-year-old daughter named Thirza, in the very county for which Greeley serves as county seat. The parents, according to the 1880 census, were Thomas, a thirty two year old farmer from Illinois, and Ellen, his twenty seven year old wife from Indiana.

This Brown household was not just a family of three, however. There was another daughter, an infant born in October of the previous year, 1879—making Thirza's age in the census rather suspect. This second child was listed as a daughter, and also happened to sport an unusual name (at least for a girl): Adelbert.

What caught my eye even more than that, though, was the entry which came directly beneath the line containing baby Adelbert's information. Remember Thirza's photograph of young Ralph Pollock? Just below the Brown household's entry came that of a family named Pollock. More than that, the family included a two year old son whose entry contained only the interesting place holder as "Baby."

I couldn't help but wonder whether "Baby" was actually Ralph—wouldn't you? To answer that, though, would take some more searching. 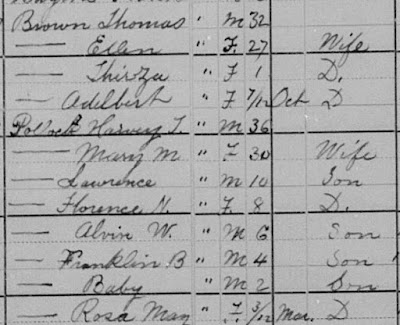 Above: The Weld County, Colorado, enumeration from the 1880 U.S. Census, containing the information on Thirza's family just next door to a Pollock family. Image courtesy FamilySearch.org.
© Copyright 2011 – 2022 by Jacqi Stevens at 2:54:00 AM
Email ThisBlogThis!Share to TwitterShare to FacebookShare to Pinterest
Labels: Brown, Browne, Cole, Colorado, Family Photos, Pollock