The Value of Rose

Sometimes, you find yourself doing everyone else’s genealogy before you can figure out which one is your own. Rose Kober—the supposed sister of my paternal grandfather—was the one key to possibly help me establish just who this man really was. And yet, she had a story of her own, which made tracing her heritage almost as difficult as working on John T. McCann’s.

Thanks to a late-life revelation by my now-deceased aunt, I discovered the name of the one known sibling of my grandfather—well, at least her married name. Amend that: one of her married names.

My task was to trace her life, both forwards to the point of her obituary and backwards to any pre-marriage documentation of her life in her parents’ home. This, hopefully, would provide records of both Rose and her brother John, along with their supposed parents, John and Anna. It might also lead to any immigration records—which, as I could tell from the 1920 census, was a declared part of Rose’s history, though not claimed by John.

Because John T. McCann was proving to be such an enigma—one could never be too sure he was who he said he was, considering the discoveries of earlier census records providing a very different name for my father’s father—Rose became the hope for stabilizing the research ups and downs. If I followed her (I reasoned), it would lead me to the answers about her brother.

So, I worked my way into the future from the point at which I had found Rose in the 1920 census. There, she had been living with her husband of five years, George W. Kober, in Woodhaven, a neighborhood of the Queens borough of New York City. While I couldn’t locate either one in the 1925 New York State census, George and Rose Kober were still at the same address in the 1930 census as they were in 1920.

Things seemed to be going well—at least financially—in the Kober household by 1930, for George was now the Assistant Superintendent for the Post Office. That, however, didn’t last long, for an April 11, 1932, entry in the Brooklyn Daily Eagle told the brief tale: 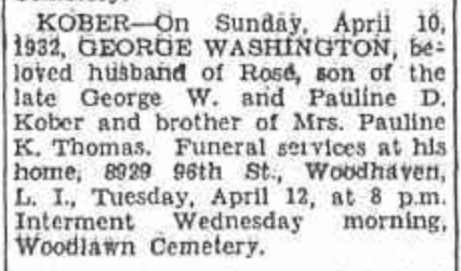