Gaining a Keener Sense of History

One of the side benefits of pursuing our family history is that of gleaning the details of the general history of the times. As I walk through my Taliaferro family’s history, I am also realizing the historical context in which their lives unfolded, and gaining a greater appreciation for its significance.

Because of my need to pursue all the collateral lines of my ancestors—remember, I’m seeking documentation to prove those autosomal DNA matches—I’ve recently pushed back to the generation preceding that of my fourth great grandfather, Zachariah Taliaferro. In addition to my fourth great grandfather, himself, we’ve already met Zack’s older brother Benjamin—the one who stole his sweetheart from him. Though I’ve been relatively silent on my progress while  posting on other topics, I’ve also continued the routine research on the rest of that generation’s siblings: Sallie, Richard, Warren (the one who may well be the father of my second great grandmother, Mary Taliaferro Rainey), Burton, Nancy, Frances, Charles and Boutwell. You can be sure that, behind the scenes, I’ll be gathering as much information as possible on each of these siblings—and then working my way back down each line, researching their descendants.

These were all the children of Zachariah Taliaferro, senior, and his wife, Mary Boutwell—a large family with many descendants to research. I’ll be busy for a while.

Now I’m advancing to the preceding generation, examining the siblings of the elder Zachariah Taliaferro. These siblings were the children of Captain Richard Taliaferro and his wife, Rose Berryman.

Like my fourth great grandfather’s family, his father—the senior Zachariah Taliaferro—came from a family with many siblings. Among them were many names echoed in the younger generation. Besides the elder Zachariah, there were Sarah, Benjamin, Richard, John, Charles, Beheathland, Peter, the twins Elizabeth and Rose, Mary, and Francis. My ancestor, the senior Zachariah, fell into the order behind his older brother Benjamin—a pattern we saw echoed in the subsequent generation. (One child, Richard, died in infancy; as often happened in those times, the parents subsequently named their thirteenth and last child by that same name.)

Reading through the old genealogies of those colonial Virginia families, I find many resources which include the lines of the Taliaferro family. I’ve been slowly working my way through each of them. Many times, the dense text is no more than an outline of the genealogical details of names, dates of birth and marriage, and subsequent issue.

Sometimes, though, the task turns from the careful—but tedious—litany of the generations and detours into an explanation of the events surrounding the lives of the people so named.

By the time I reached Captain Richard and Rose Berryman Taliaferro’s fifth child, John, I realized I was dealing with lifetimes straddling that significant American date, 1776. In learning about the life and times of John Taliaferro, I couldn’t simply stick with the genealogical data and ignore the upheaval that filled his day to day life. I had to stop and consider not only what was happening to his family, but how they became players in the greater drama of the struggle for our country’s independence.

Though John Taliaferro was born in 1733, he was not beyond serving in the Revolutionary War in the late 1770s and early 1780s. In learning about his specialized contribution to the war effort, I ran across a story so touching, I couldn’t just pass on by without sharing it.

Of course, having to bring you up to speed in all that I’ve been accomplishing—but not mentioning to you in hopes of sparing you the tedium of reviewing genealogical sausage-making—I’ve filled way more than my customary space for one day. Yes, I know, there is no task master standing over me with a whip, penalizing me for exceeding any word count allotment. But I appreciate the patience necessary for you, dear reader, to absorb the content filling this amount of blogging space. And so, with that, I beg your leave to continue, tomorrow, this saga of what became of John Taliaferro during his service in the American Revolution.

Whether continued today, tomorrow, or at a distant point in the future, though, it is in the pursuit of genealogical records—that micro-history that only our own families may value—that you and I find ourselves awakened to the bigger picture of the macro-history of life. 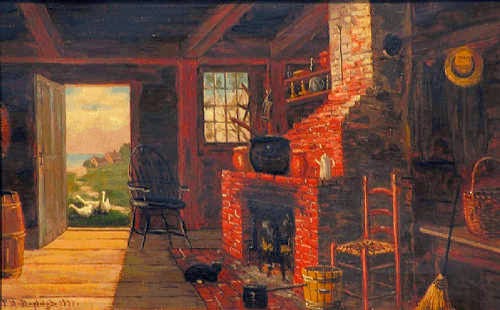 Above: "Old Kitchen," painting by American artist Frank Henry Shapleigh, one of over four hundred 19th century artists who created landscape scenes known as "White Mountain Art" from the White Mountains of New Hampshire; courtesy Wikipedia; in the public domain.
© Copyright 2011 – 2022 by Jacqi Stevens at 2:45:00 AM
Email ThisBlogThis!Share to TwitterShare to FacebookShare to Pinterest
Labels: Getting the Big Picture, Taliaferro