You are probably thinking such a question incredulous, especially following on the heels of mega-events such as the double-header RootsTech-FGS Conference extravaganza, where attendees likely scheduled extra time for research at the world’s largest genealogical library.

Even so, I still get ecstatic when I can get hold of a volume that contains surnames from my family. I like books.

I ask this question for a secondary reason, though. Recently, our genealogical society’s board was discussing this very question. The issue at hand is the fact that many such societies task themselves with preserving old documents from their localities through the process of publishing books useful for research. In addition to adding to the body of knowledge that other researchers find useful, selling such publications becomes a way to fund further activities of the society. In other words, publishing provides a society’s livelihood. Not publishing is the equivalent of losing a fundraising revenue stream. Like the old academic’s dilemma: publish or perish.

What’s a local genealogical society to do? If no one is buying books any longer, a society will—eventually—no longer be selling books.

That puts someone like me—a member of said genealogical society’s board—in a tough place. I love books, personally. But I hate to see good money thrown after bad, investing time and money into a project which is ultimately doomed to fail—at least from the sales angle.

Enter a secondary dynamic into the ring: that of the big players in the genealogical market. Used to be, the care and feeding of genealogical researchers was left to specialty publishers and genealogical societies. Now, genealogy is big business—sometimes so big, it can run the little guys off the playing field.

Does this become a chicken and egg dilemma, questioning which comes first—the lack of purchaser interest, or the lack of viable product to sell? Those “big guys” in the genealogy market supply side are often aggregators of material already in existence. Not so for local societies like mine: we create our own material, often from source documents no one in the large companies has deemed worthy of mass producing. You could say ours is a micro-niche market. But at least we had a market.

And so the debate winds around, from “nobody buys books anymore” to “the big companies have it all” to “no, they don’t include anything from our county.”

Perhaps the answer is a smarter form of needs assessment—the savvy market survey. Perhaps we need to learn from those who’ve experienced success in markets other than genealogy. Obviously, there are people out there making a living, supplying needs that others are willing to pay money for, providing some very specialized products. Why can’t we do that for the genealogy market?

Included in that discussion would be a return to the very question I started off with: are books obsolete? Can a genealogy book find life in today’s digitized world?

If given a choice, which would you buy? 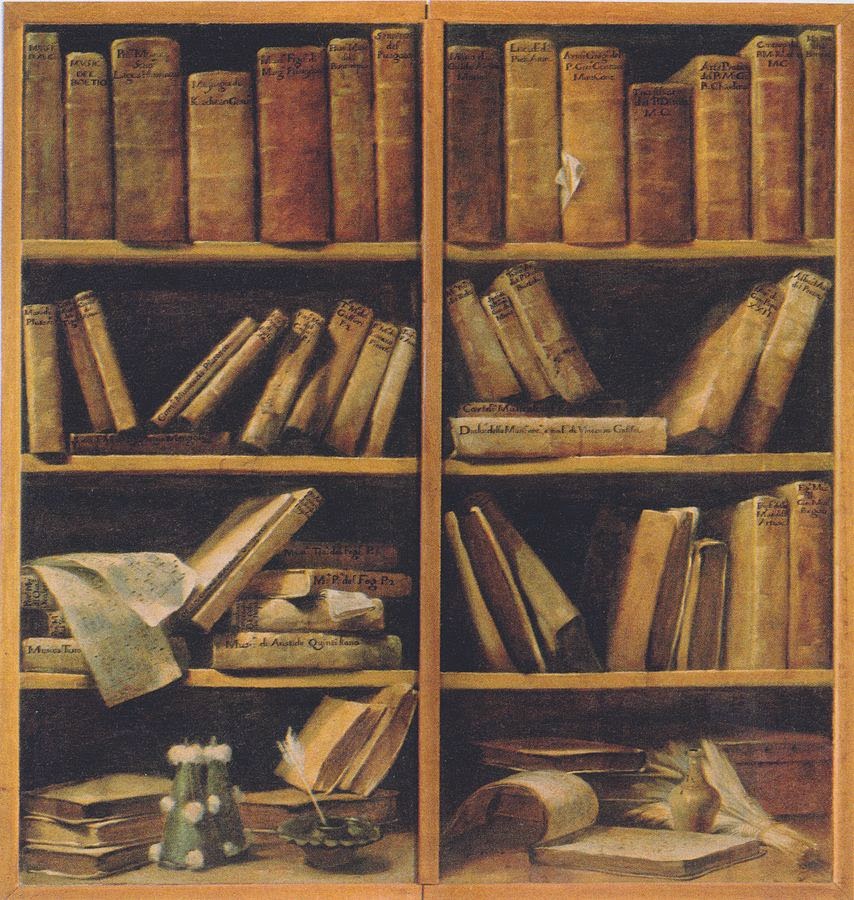 Above: Giuseppe Crespi, "Bookshelf with music writings," oil on canvas circa 1725; courtesy Wikipedia; in the public domain.
© Copyright 2011 – 2022 by Jacqi Stevens at 2:47:00 AM
Email ThisBlogThis!Share to TwitterShare to FacebookShare to Pinterest
Labels: Books, Genealogical Organizations