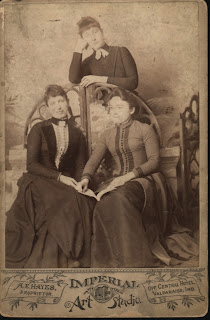 I am winding my way through the rest of the photograph collection from the family of Edna Tully McCaughey. It looks like there is precious little more I can decipher, from the scant information provided, that can be used to identify any more mystery people.
I had thought, just once more, to give it a try and figure out this photograph: three young women forming a sweet tableau of a family story I’d love to discover. The photograph is labeled clearly; the work is done by A. E. Hayes, proprietor of Imperial Art Studio in Valparaiso, Indiana. With a business name as ambitious as that, one would think there were no need to further identify the establishment—“opp. Central Hotel”—but, alas, as it turns out, it is, indeed, difficult to locate, at least from a historical perspective.
Not skilled at discerning the signs of time periods, I had at first thought perhaps this was a photograph of three sisters. Since the studio was in Valparaiso, Indiana, I assumed the girls would be from the Ryan family there—Edna Tully McCaughey’s mother’s half-sisters. Edna’s mother, Sarah, had three half-sisters: Emma, Johanna, and Mary. Growing up in Valparaiso, these girls were born in the mid-1860s, putting all three of them in their young adulthood sometime in the late 1880s.
That was a great conjecture…until I discovered that Emma died as a thirteen-year-old girl in 1877. It’s doubtful that this pose of young women was captured before that time.
Perhaps the time frame was actually a little later, I mused. Perhaps this was not Edna’s aunts, but cousins from Valparaiso. Handily, Edna’s Aunt Nellie (Ellen Swanton Clifford) happened to have three daughters, too: Anna, Sarah, and Grace. Birthdays for these girls fell in a more recent time frame, spanning the mid-1880s through 1890.
There were drawbacks to that theory, as well. I’ve already shared Sarah’s portrait from that time frame, and she doesn’t seem to resemble the young ladies in this photograph. Also, if this picture represents young ladies approaching their twenties, considering Grace’s later birth date, the photograph would probably need to be taken after about 1905. But—get ready for another theory’s crash and burn—both Grace and the baby of the family, William Patrick, were born after the family moved from Valparaiso to Chicago. The only occasion for a photograph in Valparaiso for this family would be upon their return to visit their grandmother. However, she passed away in Valparaiso in 1906, once again limiting the time frame for this possibility.
Of course, it would help in determining possible dates if I were knowledgeable about period costuming, but I’m not. I did spend quite a bit of time doing online searches for clues about possible time periods for the photography studio, the hotel, even the name of the proprietor. While I did find several city directories online, the search terms never seemed to coalesce into one identifiable entity.
In the meantime, I did enjoy a “cruise” through historic Valparaiso, enjoying various online venues sharing glimpses of the city which serves as county seat for Porter County. Whoever it was that sat for this portrait—be they sisters, cousins, or just friends—they had a lovely town to call “home.”

© Copyright 2011 – 2022 by Jacqi Stevens at 2:56:00 AM
Email ThisBlogThis!Share to TwitterShare to FacebookShare to Pinterest
Labels: Unidentified Faces