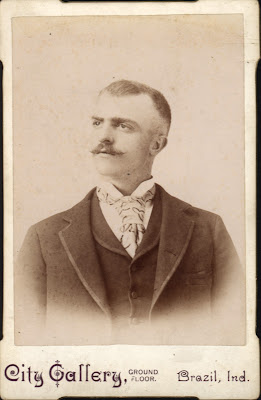 Since I possess precious few century-old pictures from my own family, I’ve fancied photographs from that era to be a rare occurrence. Yet, when I consider all the far-flung geographic locations for the studios from which this collection's portraits originate, I struggle to figure out any familial connections for these "rare occurrences."

On the other hand, nowadays, we give away pictures of ourselves, not only to family but to friends and even to acquaintances, giving little thought to expense or scarcity. Perhaps, as I muse over these last few unidentified photos from the collection of Edna Tully McCaughey, I need to consider that, even in those times, some people may have found the means to dole out their likenesses in less of a stingy, miserly fashion than my portrait-deprived situation leads me to imagine.
Regardless of whether these are family or friends, here are the last of the out-of-town photographic callers for the Tully and McCaughey families.
Take this first portrait. It was done in Brazil, Indiana. I didn’t even know where Brazil, Indiana, is. I knew of the Sullivan and Clifford family connections in Valparaiso, just over the state line from the Tully family home in Chicago. But, only thanks to a peek at the handy MapQuest, I can see that it is a long way from any familial homestead to the town of Brazil. Like three hours kind of long way—and that’s by today’s travel methods. Whoever this gentleman was who posed for his portrait at the City Gallery photographer I am at a loss to imagine. Unless it was a family member on vacation (to a small town southwest of Indianapolis???), I’m going to have to say perhaps it was a generous (or perhaps narcissistic) friend. 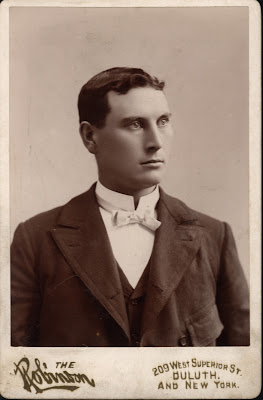 Moving from southwest Indiana past hometown Chicago in the opposite direction, this next handsome young buck chose a studio known as The Robinson in Duluth, Minnesota, for his portrait. Thanks to the Minnesota Historical Society’s Directory of Minnesota Photographers, I can see that J. B. Robinson, the principal for that studio, was in business at 209 West Superior Street in Duluth for the years 1892-1893. No…wait…the directory also has a separate entry for the same studio, showing the photographer in business there in 1897. Confusing? I’ll just stick with the decade of the 1890s and call it quits (although I sure would like to know who this subject is).
Minnesota connections are tempting, making it hard for me to put that question aside. After all, these photographs were actually mailed to me from Minnesota, where the collection currently resides. Edna Tully McCaughey, herself, though a Chicago girl who ultimately was buried there, evidently spent the last moments of her life in the vicinity of St. Paul in Minnesota. It makes me wonder what brought that part of the family to Minnesota, and whether this man might actually have been a McCaughey relative, rather than a Tully, Sullivan or Clifford relation. 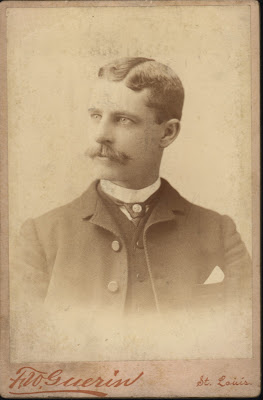 Coming totally out of left field, the third portrait originates in Saint Louis. It turns out that photographer F. W. Guerin did not dabble merely in run-of-the-mill family sittings. His products bear an ornate reverse side, boasting of his awards and achievements. A number of online resources attest to his skill and fame, and provide the time frame of his business operation in Saint Louis. I've even found discussions on this photographer online at a genealogy forum.
As impressive as that record may have been, it still leaves me with no clue as to how this photograph's subject fits into the Chicago Tully family scheme. Chalk this one up for unidentified friend until further notice.

© Copyright 2011 – 2022 by Jacqi Stevens at 2:56:00 AM
Email ThisBlogThis!Share to TwitterShare to FacebookShare to Pinterest
Labels: Unidentified Faces