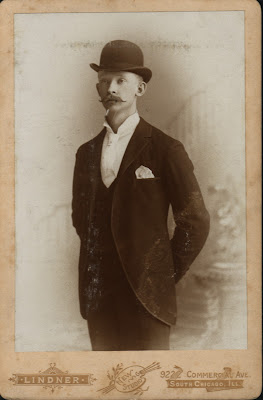 Here’s a fine fellow to come calling for a Tully daughter. Or perhaps he is a Tully relative—or a young Clifford, Ryan, or Sullivan relation, come to Chicago for a visit. Whoever he is, he at least shares the Tully family’s preference for photographers: the Lindner studio at 9222 Commercial Avenue in South Chicago.

The rounded lines of his clothing certainly contrast with the usual male blockiness of the fashions in the other photographs in this collection. I don’t know whether that indicates a different time frame or a younger taste in styles. How helpful it would be, in identifying these pictures, to know the dates for various clothing fashions! 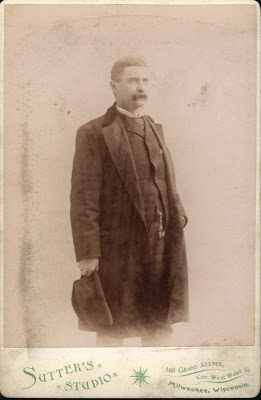 Perhaps this next picture shows one of those “older” styles. Maybe this is a practical-dressing, cold-weather-savvy Wisconsin cousin—or maybe even an uncle—of this collection’s original owner, Edna Tully McCaughey. Whether he lived there or just stopped by for a visit, the subject of this well-worn portrait chose Sutter’s Studio at 108 Grand Avenue, on the corner of West Water Street in Milwaukee, to capture his likeness.
The most aggravating of these three photos is this last one, shown below. It comes with no identifying business markings that I could find, front or back. I have no idea whether this is a Chicago relative, or one from Wisconsin, Indiana, or other states in which Sarah Swanton Tully’s family settled. For that matter, it could be a relative from Canada, as there were some Sullivan relations who settled there and married into the McCabe family in the province of Ontario. 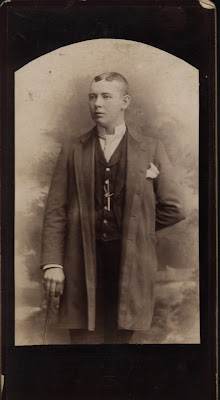 This leaves me with that vague feeling that my hope of someone discovering a long-lost relative online in these posts is an unlikely possibility.
But that doesn’t stop me from hoping.
© Copyright 2011 – 2022 by Jacqi Stevens at 2:53:00 AM
Email ThisBlogThis!Share to TwitterShare to FacebookShare to Pinterest
Labels: Unidentified Faces