Out For the Evening

Everyone—well, the women, at least—likes to dress up and go out for a special occasion. This photograph bears the label: 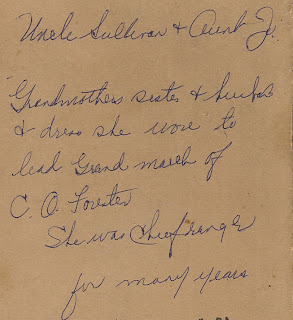 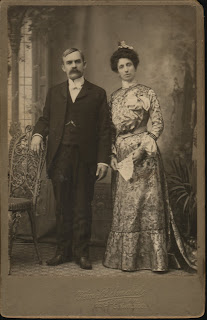 As this photograph is from the collection of Edna Tully McCaughey, “Grandmother” once again refers to Mary Ann Sullivan, the widow of Samuel Swanton, who subsequently married Edward X. Ryan in Valparaiso, Indiana. In this Mary Ann’s family, she has both siblings and half-siblings living both in Ontario and the Chicago area.
The problem is that I am not able to locate a brother who married anyone with possible nickname, “Jo.” Nor can I find a sister who married someone named Sullivan. Further, the photograph was taken at the studio of Fein & Schnabel in Chicago—a fact which helps limit possibilities only slightly.
I do have some help from the transcribed diary of Edna Tully at a young age, which mentions an aunt and uncle who lived nearby, which I’ll need to recheck and see if details match.
As for the organization’s designation, I was aware of Foresters before, but the “C. O.” puzzles me. More research for the history buff in me, I suppose.
And yet, despite my limited ability to find out more about this couple, I certainly enjoy taking in the formality of the stance, the details of the outfits, the tilt of the head and the facial expressions. There is so much more I’d like to read between the lines on this portrait.
© Copyright 2011 – 2022 by Jacqi Stevens at 2:59:00 AM
Email ThisBlogThis!Share to TwitterShare to FacebookShare to Pinterest
Labels: Unidentified Faces