Trajectory may be everything, when it comes to hitting a moving target. And yes, my genealogical target is ever in motion, for I’m tracing the surname changes through the generations of my matrilineal line. Not only that, but I’m seeking to connect that line—as our mitochondrial DNA test results tell us—to that of a man whose mother is an exact match to me. Somewhere, way back in time, his mother and my mother share a joint mother’s mother’s mother.

Only thing: which generation turns out to be the nexus between our two lines, we don’t know. I know where I’ve ended up: with a woman named Mary Taliaferro who became wife of Thomas Firth Rainey in Georgia. I guess you can call this my current matrilineal terminus.

In his train ride through the maternal generations, my mystery cousin has also made progress back to the early 1800s. Only problem: his final stop led him back to Kentucky, not Georgia.

We have not made a connection. Yet.

Obviously, our moving target is still moving. Backwards in time, we need to chase the maternal generations yet one more time. At least.

Frustrating as that may seem, you have to remember a lot has been accomplished on the part of this mystery cousin. First, he had to overcome an enormous obstacle: having been adopted, up until last month, he had no idea who to name as Step One on his matrilineal trail. I bet finding me as his exact match for the DNA test was indeed an adrenaline rush. After all, of all my “matches” for the mtDNA test, I have none that display as exact match. None. Apparently, neither does he.

Of course, that in itself doesn’t mean much. Our common ancestor could still be centuries beyond our reach. After all, an exact match could mean someone living within a range of the last seven hundred to one thousand years. That would call for an exceedingly long—and nigh impossible—paper trail.

But let’s get started anyhow. After all, a journey of a thousand miles—or generations—begins with but one step.

Here’s how Joel’s thousand steps start out. For privacy’s sake, I’ll start with the maiden names of those no longer living. With certainty, my mystery cousin can assert that his great grandmother’s maiden name was Forbes. From there, the maiden name in the next generation was McLaughlin.

By then, we are back in Texas in the late 1800s. The surname trail begins to grow cold. The next step might be a maiden name of Stinebaugh—name of a family moving to Cooke County, Texas, from Missouri. Or could it be Stonebough? Unfortunately for us, the only marriage record accessible online carries with it that frustrating Southern convention of including only initials for first and middle name—compounded by the fact that these details can be only gleaned from a transcription, not an actual digitized document. Could Stonebough be merely sloppy rendering of the handwritten Stinebaugh? Or should this be the new search trail to explore?

Frustratingly, of the death certificates that could be located for Frances B. Stinebaugh McLaughlin’s children, the entry for mother’s maiden name reads a disappointing “unknown.” No help there.

Following Frances and her parents from 1880 Cooke County, Texas, to their former home in Missouri, there is a Stinebaugh family which matches the names of her parents, William and Sarah A. Stinebaugh. While I can’t locate the family in 1870, in 1860—minus Frances, of course—there is a small household comprised of farmer William Stinebaugh and his wife, Sarah A. The ages, incredibly, seem to match, as do the states in which each person was born—Missouri for William, Kentucky for Sarah.

As to Sarah’s maiden name, though, I have yet to find any documentation. I haven’t found any reasonable listings in Missouri—nor in Kentucky. My only clue—and this one would be a very weak link—is that their 1860 household contained a farmhand by the name of Jasper B. Wills—the very surname other researchers have associated with Sarah, herself. While it is not lost upon me that this Jasper also happened to be born in Kentucky—as had Sarah—it could still just be a matter of a farmhand being simply a farmhand. Just in case, though, I’ll keep that hint in mind.

According to the 1860 census—if this, indeed, is the snapshot of the right Stinebaugh family in Missouri—Sarah would have been born around 1839. Barring any discoveries of marriage records for a William Stinebaugh and bride named Sarah, my next task will be to scour the findings for Kentucky, paying special attention to any families containing both a Sarah and a Jasper, with a surname Wills.

Even if that turns out to be correct, though, it will still be a hollow victory. You see, while I’m tracing my way backwards in time through my mystery cousin’s matrilineal line, I’m also working forward in all the female lines connecting to my own matrilineal line. While my work is in no way completed there, I have yet to run across any mention of the surname Wills. Nor Stinebaugh. Not even McLaughlin. There may be two or three generations yet to go from that point before I run into any familiar maiden names—if even then.

Hitting a moving target is always a challenge. So many variables need to be taken into consideration. As I move back through the generations—not only on my matrilineal line, but also on that of my distant cousin—I am doing just that: tracking a moving target. That target may be close. Or it may be quite distant, indeed.

It used to be considered impossible to hit a target as immense as the moon. Removed so far from us, even at our vantage point, it presented a visible target—yet the distance was so vast as to render the feat impossible.

Now, we know differently. All it took was technology. Today, we can say we have aimed for the moon, and hit our moving target.

Someday—DNA testing, digitized document collections and search algorithms combined—we will be able to say the same for genealogical quests we currently think impossible. I’m certainly game to think I can shoot for this moon of mine. 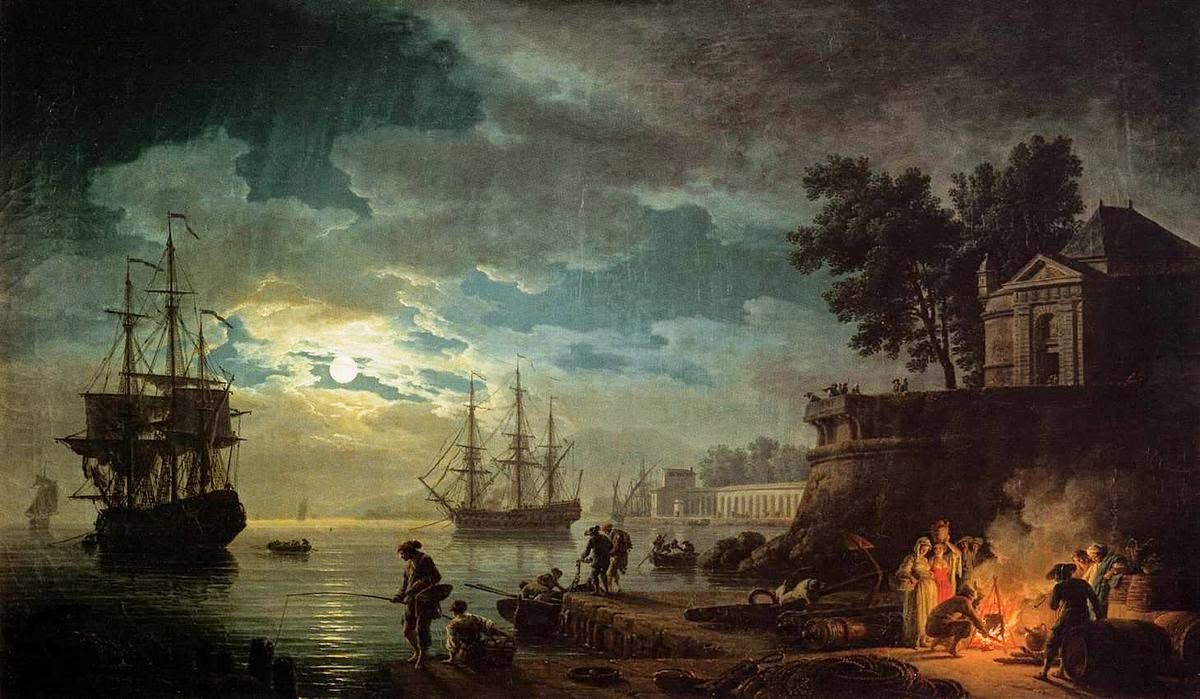 Above: Seaport by Moonlight, 1771 oil on canvas by Claude Joseph Vernet; courtesy Wikipedia; in the public domain.
© Copyright 2011 – 2022 by Jacqi Stevens at 2:49:00 AM
Email ThisBlogThis!Share to TwitterShare to FacebookShare to Pinterest
Labels: DNA Testing