Delving into the nitty-gritty on a surname from a small family has its research benefits: there are relatively few possibilities to sort through. When I searched through available websites from Poland to see what I could find yesterday on my Gramlewicz family, I was fairly certain all those who boasted that surname in the small town of Żerków would be part of my family.

Not so, now that I've moved to the other side of this Polish family. My second great-grandfather's name was Laskowski, a surname now claimed by one in every twelve hundred people in Poland. To make my search more challenging, depending on whether the records I'm seeking were kept by civil servants or church clerics—or worse, depending on the time period—the typical spelling used was variable. Add the most common spelling alternate—Laskoski—and even zeroing in on a very limited geographic area, there was much to review.

As the amount of data zooms upward, the need for an organizing system correspondingly increases. I can see how genealogy and spreadsheets can be a marriage made in research heaven. My goal in this part of my search for those Gramlewicz ancestors is to see if I can reconstruct the family constellation for each branch of the related families—thus, the need to include the Laskowskis, as well.

The challenge is that the website I am using right now—BaSIA, or the Database of Archival Indexing System—has some wonderful resources for the early 1800s, and again in the latter part of that century, but for that big gap in the middle, it will require harvesting inferences from death records and other records to reconstruct which Laskowski births belong to which set of parents. Hence, the search for family patterns. And thus, the need for a spreadsheet.

Essentially, the task requires a large amount of data to be dumped into some sort of magical organizing machine. Hopefully, on the other end of the process, I will at least discover which set of Laskowski children and grandchildren belong to which originating couples. As for those two Gramlewicz-Laskowski couples I am grappling with, this may be my only resource for sorting them out.

It's a tedious process, but one made easier with the right tools. In the meantime, while I grind through this genealogical sausage-making process, I'll spare you the step-by-step details. Though I'm appreciative of the wonders that can come from organizing large sets of data, we all know how little audiences appreciate watching any type of "sausage" being made. 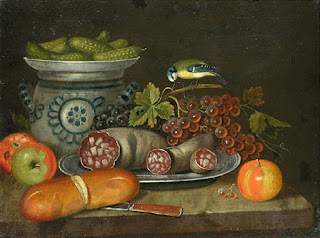 © Copyright 2011 – 2022 by Jacqi Stevens at 2:46:00 AM
Email ThisBlogThis!Share to TwitterShare to FacebookShare to Pinterest
Labels: Gramlewicz, Laskowski, Online Resources, Poland