Who would have thought last Christmas, perched just shy of a new year, would have ushered in a year as unexpected as this year has been? And who, at the tail end of this same year, hasn't wished that at least Christmas could have been immune from the ravages of this microscopic monster which has commandeered so many of our life choices.

For at least one day in the midst of this reality, I wish you a respite, a peaceful holiday to devote to the very things which bring you an encouraging calm. Though next year is, again, an unknown, I hope that momentary respite is the gift that Christmas can bring to you this year. 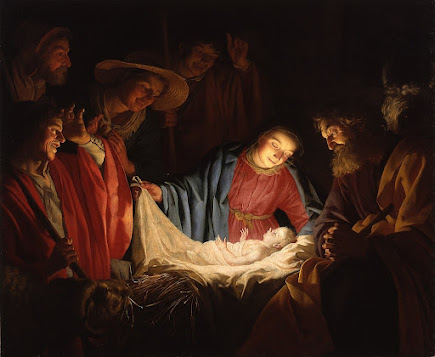 Above: "Adoration of the Shepherds," oil painting circa 1622 by Dutch Golden Age artist Gerard van Honthorst; courtesy Wikipedia; in the public domain.

© Copyright 2011 – 2022 by Jacqi Stevens at 2:49:00 AM
Email ThisBlogThis!Share to TwitterShare to FacebookShare to Pinterest
Labels: Holidays and Genealogy