Was it in a dream in the hazy dawn hour this morning when I thought I saw a pink picket fence? Perhaps in such an early waking moment, the vision stuck with me in an altered light, but there it was: a picture quaint, but not quite right. That serves well to describe Ancestor Number Five in this new Twelve Most Wanted for 2021: a woman whose story was nearly obliterated with the early end of her life.

Her name was Sarah Howard Ijams, and she was born to a family likely to yield my husband's sisters more than one claim to membership in the Daughters of the American Revolution. Her unfortunate early death in 1829—possibly due to complications of childbirth—yielded very few records. Most important of those records would be that of her marriage to John Jay Jackson, which somehow was supposed to have occurred at a United States outpost in territory near the current city of Saint Louis, Missouri. How others could use the Jackson line for lineage qualification is not clear to me, given the lack of currently-existing records for that marriage. Perhaps, like the pink picket fence in my dream, the picture must have been shaded by a twilight zone of documentation in those earlier days of DAR.

Still, it is not surprising to find that one near relative of a Revolutionary Patriot could have intermarried with others of the same heritage, and that is indeed the case for this same Sarah Howard Ijams—which is why, this year, I want to approach the puzzle from her own family's side, rather than her husband's Jackson lineage. Even if I never find actual documentation for her marriage to John Jay Jackson, Sarah herself can lead my mother-in-law's descendants to DAR membership qualification. It's just a matter of piecing together some solid documentation and submitting the application—sans pink picket fence—a great goal for my fifth family history focus for the coming year. 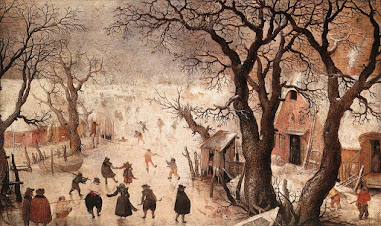 Above: Winter Scene on a Canal, oil on panel by Dutch artist Hendrick Avercamp (1585-1634); courtesy Wikipedia; in the public domain.