Who says goal setting demands successful completion? It's important to set goals, alright, but we can't let the risk of falling short keep us from setting our sights high. When I began selecting my "Twelve Most Wanted" ancestors to pursue in 2020, of course I had no idea what the future would hold. The important point was to set the course and follow the research plan as closely as possible. Though I often missed the mark, I still accomplished so much more in my family history research than I would have done without setting those monthly goals.

For my Twelve Most Wanted for 2021, I'll likely see that same dynamic come into play—but I'll also benefit from the opportunity to revisit some family history targets for which I fell short in previous years, and pick up where I left off.

My goal selection for February will be a perfect example of that mechanism, for the person I will be researching is one I've attempted pursuing in the past—nearly seven years ago, in fact. Now is the time to retrace that very research trail and see what progress can be made in bringing me closer to that goal of one very special person's story.

Just like my goal for this upcoming month of January, my February "Most Wanted" is not exactly a blood relative, but one who was close enough to members of my family to allow me to draw on my own memories of her. She was my godmother, a close family friend from my mother's early career years. I knew her as Genia Melnitchenko, but most everyone else knew her by her stage name, for she was a ballet dancer.

I've written about her in a brief series which began with this post back in 2014, and continued for the following week. By the time I had finished sharing her story, I realized I wanted to build a family tree for her—I remembered her parents from my childhood visits to their apartment in New York City—but seven years ago, I couldn't quite gain the traction to finish that project. For this February, I will make sure to set aside the time to post a tree online for what I can find on her family.

Don't think, though, that that will be an easy project. It will be a challenge for several reasons, first of which is the necessity of researching an ethnicity for which I know next to nothing. I do recall my mother saying Genia's roots were Russian, but I've since seen indications that a surname like hers would more likely be Ukrainian than Russian—hinting also of some rugged stretches of international history in that region her folks once called home. Then, too, there will be the challenge of a language barrier for this researcher—what? You thought I read Russian?—and the steep learning curve of trying to discover online resources for records from a region buried in two hundred years of disputed history.

Like I said, though, goals are statements of what we intend to attempt to accomplish. That is the beauty of selecting one research goal for each month: I'll spend a month working on this project. I'll give it my best, but when the month is over, I'll carefully mark my spot in the research log so I can pick up this project again in the future, and move on to the next month's challenge. After all, a genealogist's research is never really done; another pass through this project at a future time may yield even more information than what is available now in this pandemic season of our lives. 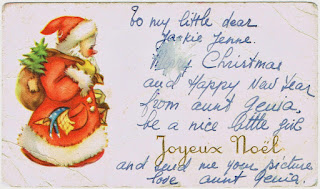 © Copyright 2011 – 2022 by Jacqi Stevens at 2:51:00 AM
Email ThisBlogThis!Share to TwitterShare to FacebookShare to Pinterest
Labels: Goal Setting, Holidays and Genealogy, Melnitchenko