The more we discover about our family history through DNA testing, the more willing we are to believe that we can find other details using that same process. In planning my Twelve Most Wanted ancestors to research for 2021, my third selection on my mother's side will be one of my third great-grandmothers, Delaney Rosella Townsend, wife of Andrew Jackson Charles.

I've written about the Charles family of Florida before—the family of pioneer traders Reuben and Rebecca Charles, namesake of Charles Spring in the northern part of the state. Their history reaches back far before the place became part of the United States. What I haven't delved into, during that exploration, was where son Andrew found his wife, Delaney.

Born about 1816, supposedly in South Carolina, Delaney was in Florida territory by the early 1840s, when she married Andrew Jackson Charles on March 8, 1841. The only document in which I can find her—albeit with her given name altered to Lania—is the 1850 census. By 1860, ominously, all I could find of her family was her three children listed in her sister-in-law's household. Both Andrew and Delaney had disappeared.

Researching a surname like Townsend is not an easy proposition. It is a fairly common name, one which could easily lead a researcher down the wrong track. And yet, in my thousand-plus DNA matches at each of four of the five companies at which I've tested, I keep getting messages that I connect with others descended from that same Townsend line. Evidently, someone else has found the secret sauce that recomposes that Townsend family.

If I've learned anything from my experience piecing together my father's Polish lines through the sheer power of DNA guidance alone, it is that such clues are possible. From such leads, I can go back and reconstruct the paper trail, not from my present generation working backwards in time, but from that ancestral line reaching forward.

For that third of my Twelve Most Wanted for 2021, this will be Delaney Townsend Charles' moment to have her roots untangled, and to hopefully work my way back at least one more generation. Sometimes, such breakthroughs lead to more than we expect, but I feel positive that, with the guidance of DNA matches, I'll at least be able to reach that level of fourth great-grandparents in the Townsend line. 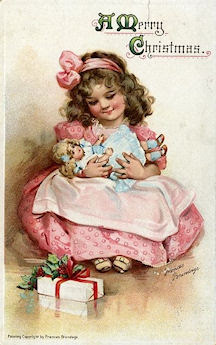 Above: Christmas postcard illustrated by American artist Frances Brundage, circa 1910; courtesy Wikipedia; in the public domain.