I can't conclude my father-in-law's portion of my Twelve Most Wanted Ancestors without a hat tip to his Irish immigrant forefather with the shortest amount of time actually lived in America, Stephen Malloy. While I don't have much information on the man, what little I do have amounts to some of the most tantalizing fragments of what must have been an unusual story.

In short, Stephen Malloy—one of my father-in-law's great-grandparents—likely lived less than thirty years in total, and was presumed to have died within the year he arrived in Boston. I can't document that date of death, of course—nothing is ever easy—but it is fairly safe to say the man disappeared shortly after stepping off the Anglo-American, the ship which had brought him there from Liverpool in 1849. That, at least, is the story held by family tradition.

While I don't have any documentation on Stephen Malloy's demise, nor any shred of evidence on his origin in Ireland, what I do have is an unusual letter, written by someone else on his behalf on the eve of his departure for Boston. The letter was dictated by a young husband and father in England to his wife back home in Ireland. The gist of the letter: love you forever, but I'm sailing for America in the morning.

Stephen Malloy's wife, Anna Flanagan, thankfully kept that letter shielded in its envelope for the rest of her life, passing it to her daughter who, at barely one year of age had lost her father. Eventually, a photocopy of that letter and its envelope ended up in my hands, by my request, from the Stevens family historian who had had the foresight to at least preserve it in that rudimentary xeroxed way.

The unique detail of that letter—in particular, the address on its envelope—was sufficient to lead me to the doorstep of where Anna Flanagan Malloy may have worked or lived, in her husband's absence. Despite the precise guidance that envelope brought me, it still isn't enough to allow me to learn one bit more about its sender.

After all these years since I last tackled that puzzle, I'm hoping something more will surface about Stephen Malloy, the man who married Anna Flanagan of County Limerick, the immigrant Irish woman who brought her fatherless daughter to live in Chicago. Discovering anything else will be worth giving Stephen Malloy a spot on my Twelve Most Wanted for 2020. 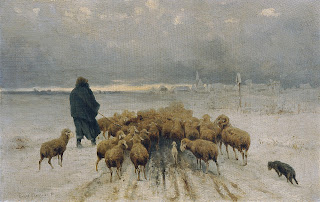