Ancestor #8: Another tip From DNA


Is it possible to find the right Kelly in pre-famine Ireland? How about if the given name was James—and he married a woman named Mary?

Researching my father-in-law's two Kelly lines has been a challenge, to say the least. One of those Kelly lines included a later immigration, plus a marriage to someone with a more distinct surname—such as Falvey, which I mentioned yesterday—so the challenge isn't quite so daunting there, despite that husband's name being John Kelly. A DNA connection never hurts, either.

In today's Kelly quandary, the going isn't so easy—if you can call a research question like this easy. Yes, James may have been a slightly less popular given name than John, but that is a small consolation in this research puzzle. There have been so few resources.

Quite a while ago, I had obtained some handwritten notes passed down from previous decades concerning an early Indiana burial ground—a place where the headstones are now far from readable.
Supposedly, the Catherine Kelly who was my father-in-law's great-grandmother was buried in that plot in Lafayette, Indiana, along with a couple named James and Mary Kelly.

Other documents led me to the conclusion that James and Mary were Catherine's parents, and I was able to construct the collateral lines for many of the children of this direct Kelly ancestor. In some cases, I followed the lines of descent, only to discover the last of that branch's descendants died childless. Even if I could have tried to prove a genetic connection, without any distant cousin to ask about participating in DNA testing, that would have been the last of it.

And then, up pops a DNA match. To this very Kelly line. Am I elated? You know it. I now have confirmation that my hypothesis was leading me in the right direction: my husband's DNA test connects him at the right level with a descendant of Catherine Kelly's sister Bridget.

Now, to pursue what else can be found about their father, James Kelly. With this clue, I'm not only looking for a surname which is so common in that Irish homeland, I'm honing in on specifics. I'm looking for someone named James, who married Mary, and had children named Matthew, Rose, Catherine, Bridget, Thomas, and Ann.

While I haven't yet found any further evidence regarding the family's identity, I haven't worked on this line for at least three or four years. This new year might put me at a better advantage to seek out documentation to lead me back to James Kelly's exact place of origin in Ireland. For the second of my father-in-law's three ancestors to research for 2020, I'm adding a second Kelly to my Twelve Most Wanted list. 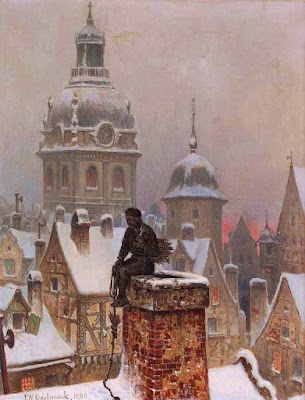