Paying Attention to the Details

When you know you have an interesting ancestor in your roots, it sometimes is hard to exercise that due diligence to equitably research every other relative along the way up that branch of the family tree. So it is with the McClellan line, where everyone who knows the family history wants to jump straight back to George E. McClellan, Florida pioneer and politician—the one with all the stories.

Since I am researching my great grandfather's line—the forebears of Rupert Charles McClellan—I need to resist that temptation and linger a while on the details about his own father, William Henry McClellan, and his mother, Emma Charles.

Putting my second great grandfather in his place in history means realizing his life spanned a great divide in American saga: the Civil War. Or, as he and sympathizers on his side of the conflict might rather have put it, the War of Northern Aggression.

Born in 1845, William McClellan's arrival seemed timed to thrust him, in the prime of life, into the midst of an emotionally-fraught era of history. But since, in our review of his life's history, we are working our way backwards in time—as any genealogist would do—we'll start his story at the end.

Just as William McClellan had started his life in that out-of-the-way rural spot in northern Florida, so he ended it in 1914, on the family's property near Wellborn. Like everyone else, he was a farmer—albeit one with $1000 of real property and $200 of personal property at the start of married life in 1870. Not bad for a start in those days.

Just after the close of war—and, presumably, his return home from service—William married Emma Charles, the orphaned daughter of another long-standing local family. Obtaining license to marry "Miss Emma" from the Suwannee County courthouse in Live Oak on September 16, 1867, William exchanged vows with his bride in a ceremony the following October 23—as noted in a record not filed until the following February 28.

Though William McClellan died in 1914, his wife—and mother of his nine children—outlasted him significantly, not passing away until April 11, 1940. Putting that in perspective, Emma died only three years before her son Rupert did—and well after my own mother was born, making me wonder whether my mother had known Emma, herself. I've heard stories of Rupert's wife—my mother's favorite of her two grandmothers—but little of Rupert. I remember, from my childhood, her vague mentions of a great grandmother, but now that I've discovered Emma Charles was orphaned before her marriage, her status seems to meld with that of Rupert's mother-in-law, also an orphan from a young age. These are undoubtedly those moments that make us wish we had thought to ask more questions much earlier. 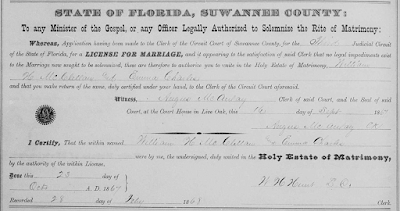 Above: Image of marriage license issued by Suwannee County, Florida, to William H. McClellan and Emma Charles on September 16, 1867; courtesy FamilySearch.org.
© Copyright 2011 – 2021 by Jacqi Stevens at 2:46:00 AM