The task of genealogy seems relatively straightforward: for each generation we research, proceeding backwards through time, we double the number of ancestors for whom we must gather data. We start with ourselves, move back a generation and are tasked with documenting the minutiae of two people: our parents. From there, we cover four grandparents. Eight greats. Then the leap to sixteen.

You get the idea.

With my recent trip to Florida and the opportunity to stop by and visit some historic landmarks of the town where my great grandfather, Rupert Charles McClellan, lived one hundred years ago, it occurred to me that I ought to check how the doubling process was doing on my maternal grandmother's side of the family tree. After all, it was she, the daughter of Rupert, whose graduation from Fort Meade's high school so long ago left me some nifty century-old memorabilia.

As it turns out, some of the generational doubling on that McClellan line has been left in the dark. 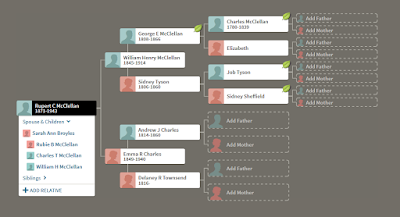 I need to get busy on that line, and there is no time like the present—especially prompted by our recent trip to the McClellans' home state.

This doubling process is not without its detractors, of course. One cannot simply double each generation's count of ancestors, ad infinitum, without exiting the realm of possibility. Otherwise, at some point—say, the generation of Charlemagne, as one pragmatic blogger once pointed out—you'd be conceptually dealing with a head count much greater than the actual population of the earth at that moment in history.

The answer, of course, is that somebody out there in the distant branches of our family trees must have married a cousin. Or a niece. Or one of those once-removed types.

Apparently, that theoretical doubling of the family tree with each generation doesn't work itself out in real life. So far in this line—my maternal McClellan line—I haven't seen any signs of family marrying family. But then, I haven't progressed farther than my third great grandparents on all sides of that family branch. Who knows what happened in that post-colonial Southern family prior to that point?

I've already seen signs of intermarriage among those in my Taliaferro line—the family of Rupert's father-in-law, Thomas Taliaferro Broyles. And it was quite easy to finger several such lines in my husband's mother's line of pioneer settlers of central Ohio. In fact, though not part of my own family's heritage, such isolated populations as the Acadians who settled in Louisiana and the entire population of Iceland sport trees with eventually decreasing—rather than geometrically ever-increasing—numbers of ancestors.

This "redundancy" resulting in pedigree collapse is neatly outlined in a post by Olive Tree Genealogy's Lorine McGinnis Schulze. By necessity at some point, there must be a decrease in the head count in the generations of our ancestors. Yet the magnitude of numbers can be mind boggling. Take, for instance, Lorine's example posed by demographer Kenneth Wachtel, examining the possible number of ancestors of a "typical" child born in 1947 England. Such theoretical calculations prompt us to realize the interconnectivity of the earth's population. While I'm not sure we can assert that everyone is at least fiftieth cousin with every other earthling, numbers of such magnitude certainly sound convincing. And overwhelming.

If nothing else, they play out in my mind when I wonder, while wandering through places like Disneyland or Tampa as I have in the past month, what the chances might be of crossing paths with an unknown cousin.

A discovery of just that sort, popping up last week, seems so random: that my husband—an Air Force brat growing up in Albuquerque, Colorado Springs and Houston—would end up living well over a thousand miles away in a city where a distant relative once owned property beside a road on which we regularly drive to town.

Though the city in which we live is a place of over three hundred thousand people—possibly increasing such chances—it is not one on everyone's radar. You may have heard of America's next largest city (Pittsburgh) and the next smallest to ours (Anchorage), but who has heard of Stockton? We almost never make national headlines except for local government antics, unusual crime or the rare flood in the midst of this drought-stricken inland valley—my husband's fifteen minutes of fame came while he was acting Public Information Officer for our county's Sheriff's Office when a levee broke and flooded an entire island here—so what are the chances that another cousin from as far away as Ohio would stumble upon this unknown territory?

In fact, every time I run across a relative's name indicating residence in my city or county, it startles me. I don't know why; perhaps residents of our town have an underdog complex. Who would move here? Just from the sheer numbers, though, the possibility shouldn't surprise me. We are surrounded by cousins. Until we delve into the research, though, we remain ignorant of that fact.

Lorine Schulze mentioned that the farther back in her research she presses, the less she becomes surprised at the increased incidence of contacts with distant cousins. That would make sense, as long as those generational numbers keep doubling. That, coupled with the accessibility of "matches" via DNA testing—plus the willingness of a broad swath of our population to pursue genealogical research—give us an unprecedented opportunity to discover all those invisible cousins of which we would otherwise have remained oblivious.

© Copyright 2011 – 2022 by Jacqi Stevens at 2:47:00 AM
Email ThisBlogThis!Share to TwitterShare to FacebookShare to Pinterest
Labels: DNA Testing, Florida, Getting the Big Picture, McClellan