Wildwood and the Family Tree


There are threads of our own history embedded in the stories that will someday be told about our children. Likewise, when we seek the secrets of our ancestors' lives, we may find them revealed in the catalogs of their children's accomplishments.

I remember stories my mother told me of her childhood memories, succumbing to the drowsy summer twilight's heat, lapsing into fitful slumber punctuated by incessant droning of adult voices. It was always politics they were discussing—Florida politics. Why it never occurred to me that that scenario might have been generational in her family, I'm not sure.

Nevertheless, now pondering the family story of my maternal grandmother's Aunt Fannie, I'm not sure why my discoveries about the Rowell family took me by surprise. As I grasped at straws, attempting to trace the lines of the two boys in the Rowell household, the only viable hint came from the child with the least amount of promise provided in the clue of his name: E. C.

As it turned out, researching the "O. C." given in the 1920 census as Fannie's husband's name led me nowhere. Likewise, the "Harris B. Rowell" entry for the younger of the household's two boys. But turning to search for clues on "E. C." lit up the board for those Google hits. And yes, that clue of politics woven into our McClellan family history seemed to resonate once again.

The search didn't start out in a promising way. I usually make my first stop Wikipedia, where I can gain a rough overview of the subject I'm about to delve into. In the case of E. C. Rowell, however, there wasn't much to be found. He was included in a long listing of state politicians who had risen to the rank of Florida's Speaker of the House, but unlike the others, flush with lengthy bios and ornamented with photographs or portraits, his was a click that led only to what Wikipedia calls a "stub" of an article—an entry that needs a volunteer contributor to step up and fill in the blanks.

There were ample other resources with which to paint the portrait of who this E. C. Rowell might have been. With just a few quotes, the picture began taking shape.

Shortly after his death in 1992, the Orlando Sentinel provided the most straightforward—and least compelling—statement about just who E. C. Rowell was.


Rowell, a Democrat from Sumter County who served [in the Florida state legislature] from 1956 to 1970, was speaker in 1965. He later was chairman of the powerful Rules Committee. After leaving the Legislature, Rowell became a lobbyist for the trucking industry.


It was in commentary from other politicos that I gleaned the more succinct flavors of his personality. Attorney and Central Florida Ag News columnist Michael Martin pegged him as "one of the most feared former Speakers of the House" and reflected on his


cigar smoking, concise words, no bull...La Guardia of New York would have shivered.


Likewise, Florida political commentator, Bob McKnight, echoed the Democrat legislator's characterization as "cigar chewing," and noted that after his tenure—and even into the 1970s—


His legacy was still felt and his record was well established as a legislative leader during very turbulent times.


As sometimes happens with public figures, E. C. Rowell eventually rated a building named after him. Despite being lumped together with the "Pork Chop Gang," the former state legislator lived to see his name planted on the façade of a public library—not in Wildwood, home of the former Florida Speaker of the House, but in nearby Webster, where, according to one small-town tour book, the politician's family had moved, just after the 1920 census where I found Fannie's listing in the Rowell household.

Perhaps that is why, though his 1977 biography was penned by "award winning" Orlando Sentinel Star newspaperman Ormund Powers, it was actually published by the Board of Governors of the E. C. Rowell Public Library. Of the several quotes included on the dust jacket to the hardcover issue of E.C., Mr. Speaker, E.C. Rowell, none seems to capture his essence quite so well as the remark by Don Warne from All Florida News:


Despite all that can be found on E. C. Rowell—well, at least if you take the time to look—I still don't have my question answered: if E. C. was one of the two boys in the household of O. C. and Fannie Rowell, how, exactly, did the future Speaker of the House of the State of Florida relate to my grandmother's aunt? Though it certainly looked as if he would be Fannie's son, there was something hinting to me that that might not have been the case. 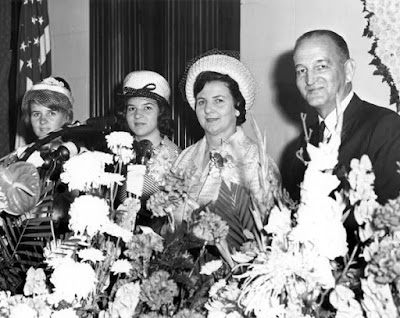 Above: Photograph of Florida Speaker of the House E. C. Rowell and his family—wife Mildred "Margie" Carlyon, daughters Diane and Barbara—on the opening day of the state legislature in 1965; courtesy of Florida Memory, the State Archives of Florida.

© Copyright 2011 – 2022 by Jacqi Stevens at 2:49:00 AM
Email ThisBlogThis!Share to TwitterShare to FacebookShare to Pinterest
Labels: Florida, McClellan, Rowell