Realizing Our Own Place
in Ongoing History

Today—at least in the United States and Canada—we celebrate Labor Day. If you are like me, the memories you have of that holiday are quite different from those fueling the original intent of the commemoration. Labor Day, for children of our generations, was the bright line separating the wonderful world of summer vacation from the dreary rest of the year.

That, however, is the way it used to be; now, the return to school can be much (more miserably) earlier—reminding me once again that the shift in delineation of "family history" edges ever so much closer to dates I can personally recall.

As you research your family's saga, do you note the occupations listed for your ancestors? In my husband's family tree, there were miners who undoubtedly faced the types of working conditions which unions once protested. My maternal line—as well as my husband's paternal line—included several who made their living working for the railroad. Not just a little ditty sung years ago, that represented a position of grueling labor.

It was the multiplied experiences of those many countless people that prompted formation of unions and propelled the message to the forefront in major cities across the continent. The first American Labor Day parade was organized at Union Square in New York City in 1882. Before that, a parade in support of a fifty eight hour work week was staged as part of the Toronto Typographical Union's strike in December, 1872, and became the inspiration for Canada's first Labour Day commemoration.

By the time of my childhood, Labor Day meant two things to me. First, parades; since my dad was a musician and played the trombone, inevitably our family would all pile in the car and drive with him to the town where he was participating in a Labor Day parade. Second—and so anticlimactic after the excitement of a parade—it meant the passing of summer and the sinking-pit-of-the-stomach realization that everyone must now go back to school.

Of course, the historic significance of the day would be lost upon such a mindset.

On the other hand, even my Labor Day experience would be totally meaningless to the young people of the current decade, who have no idea whatsoever that school wasn't supposed to start in mid-August.

These observations jolt us into a reality check: in addition to diligently assembling the stories of our ancestors, we need to preserve some accounts of our own experiences. We, too, must take a place in our family's history.

I had a student in one of my beginners' genealogy classes do just that. She happened to be much older than I, so at the time she showed me her booklet of personal memories, I had taken it much the same as one would, regarding something unnecessary or far removed from my own circumstances. Much as Laura Ingalls Wilder's dream of preserving the stories of her childhood must have seemed strange and superfluous to her peers—why, everyone knows that!—I had thought keeping a record of the life experiences I remember would be so, well, ordinary. But now, I'm not so sure.

What once seemed commonplace and plain to us is ever so slowly morphing into the way it used to be. And memories have a way of fading over time. While cameras can capture the way things used to look, it is words that we need to help preserve what it felt like to live through the episodes that made up past decades. Those "everyday" occurrences that we thought were so commonplace will someday become forgotten—unless we take these same tools we've put to use in telling our ancestors' stories and apply them to preserving memories of the lifetime we, ourselves, have experienced, too. 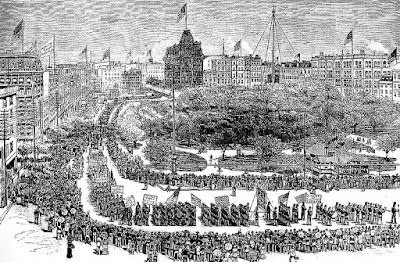 Above: Lithograph of America's first Labor Day Parade, held at Union Square in New York City in 1882; courtesy Wikipedia; in the public domain.
© Copyright 2011 – 2022 by Jacqi Stevens at 2:51:00 AM
Email ThisBlogThis!Share to TwitterShare to FacebookShare to Pinterest
Labels: Holidays and Genealogy, Occupations