Knowing How Things Got Here


When I was growing up in the New York City suburbs, a number of churches took to offering summer camp experiences for inner city kids—to vacate the city and head for the country. The idea was to allow these young people, locked in a sweltering cement jungle, the opportunity for a different point of view. Whether true or not, a popularly-voiced idea was that "some" people needed to be disabused of the notion that, say, apples came from grocery store shelves. The feeling was that city walls distorted one's perspective—not healthy for children and other living things.

Whether all that stuff about rescuing people from the notion of apples-on-grocery-store-shelves was true—or even necessary—I don't know. I do know a lot of kids who wouldn't otherwise have had the opportunity got to spend at least a week out of the summer in a much more rustic setting than they were accustomed to having.

But let's think about that hypothetical apple for a minute: where did it come from? If you are reading this post from somewhere out on the plains of Iowa, for instance, you would think it ludicrous that anyone would have missed the fact that that apple most certainly came from somewhere—and not from a grocery store shelf.

Though I didn't grow up on the streets of New York—well not, at least, the cemented-in part—this illustration got more than its fair share of my thinking over the years. You see, even though I had my very own apple tree in my back yard, I still needed to think about where things come from. How they get here. And what happens to everything else when they arrive.

Perhaps that's an outgrowth of my fascination with Systems Thinking. I find those kinds of thoughts embedded in my everyday life, in the way I approach things, or see stuff.

When I teach a beginners' genealogy class, for instance, I feel the need to delve into explanations of how things got here. Have you ever thought about it? How did those documents from all sorts of governmental repositories find their way into the FamilySearch.org website? What makes a search of those documents possible? Why is it you can search for words in a document, but not in a photo of a document?

It all reminds me—this indexing thing that transforms pictures of documents into something searchable—of the clichéd René Magritte painting, "The Treachery of Images." It is a painting of a pipe, under which is written (in French, of course), "This is not a pipe."

As Magritte himself explained,


The famous pipe. How people reproached me for it! And yet, could you stuff my pipe? No, it's just a representation, is it not? So if I had written on my picture, "This is a pipe," I'd have been lying!


Why is that painting of a pipe not a pipe? For the same reason that a picture of words is not the same thing as the words, themselves. Just because something looks like a word doesn't mean it is a word. It won't behave like a word—at least via our computers—until we package it up to behave like a word would.

In other words, that set of words on the scanned document—say, that marriage license you've spent weeks searching for—needed to be indexed. And I want my students to know that. Someone has taken the time to convert that picture of a document into a manipulable form—something useful. Something we can search.

Of course, for now, I want those beginners to have a modicum of gratefulness for those who have put in the work, making this system run the way it does. But later, I hope that gratitude converts into a sense of wanting to give back to the community. Some will do that by sharing their research. Or teaching others how to research. But hopefully, others will realize that they, too, can become one of those volunteers who have made this whole genealogical search system work the way it does: they can become indexers, too. 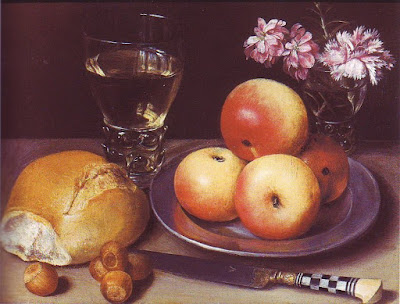 Above: It goes without saying that those aren't really apples in that early 17th century oil on canvas, "Still Life With Apples," by German painter Georg Flegel. (Nor is life really still.) Courtesy Wikipedia; in the public domain.
© Copyright 2011 – 2021 by Jacqi Stevens at 2:49:00 AM

Email ThisBlogThis!Share to TwitterShare to FacebookShare to Pinterest
Labels: Giving Back, Indexing