Seeking Tokens of a Bygone Era


If it weren't for a lone letter saved among the family papers for generations, we would have had no knowledge of where our Flanagan and Malloy ancestors originated in Ireland. Thanks to an enigmatic yet poignant message from Stephen Malloy to his wife in 1849, however, we held the directions to their residence in our own hands as we drove through the countryside of County Limerick this week.

In the Irish manner of addressing letters of that century, the envelope essentially gave directions to the rural location that anyone familiar with the area could follow. From the port at Liverpool, Stephen Malloy's letter went first to Cork, then up the main road--now the highway known as N-22--through the town of Charleville, continuing north to the region known as Cappanahane. At that point, the letter was directed to the attention of Anne "Moley," in care of a man whose name I couldn't quite read clearly. Was it John Mason?

It just so happened that there was, in Cappanahane, an estate which at one point was owned by someone named John Mason. The place had changed hands from one Mason relative to another, and may have ended up in rough financial times eventually being sold. According to the Landed Estates Database at the National University of Ireland in Galway, there was indeed a Mason estate at that location. The database even provided coordinates so we could locate it via our GPS navigation system.

The Mason home in Cappanahane--or, as our Garmin preferred to spell it, Cappanihane--was just down the very narrow country lane from Ballyagran, the place where Ann Malloy's brother, William Flanagan, had given as his homeland before immigrating (via a brief stint in Australia) to Chicago.

Since we were staying so close to the area this week, we decided to do a little exploring. Stopping for coffee and a pastry treat in Charleville after leaving our hotel in Cork, we headed out into the country. Already knowing what was in store for us down those narrow country roads, we kept to the main road as long as possible, turning west just outside Bruree.

Our navigational system brought us straight to Ballyagran, which now turns out to be site of a few stores at the crossroads with a school. The few houses just outside those four corners slipped back out to the nothingness of lush greenery and we knew that was the spot. Though there was a sign alerting us to our arrival in the village, there was no Catholic Church that we could see that would designate the "Parish of Ballygran" that was memorialized on William Flanagan's headstone in Chicago.

We continued on the road to Cappanahane, winding down ever-narrowing lanes, feeling all the time as if we were trespassing onto someone's private driveway, though there was no one in sight, nor any houses nearby.

At times, we would pass crumbling walls which we presumed might be vestiges of old buildings--but how old? It was hard to tell. Ireland is home to ruins dating back centuries; finding a wall from a barn or hovel from the 1800s would be a relatively more recent find.

The road we followed eventually came to a fork. At the head of the splitting path, behind some old metal fencing, stood a crumbling two story building. With all windows missing, roof crumbling in, cracks in the walls, and warning signs about "unauthorized persons," the place was a current-day reminder of how things once were in bygone years. Could it be the place was standing two hundred years ago? Could it be the home of the same John Mason to whom the letter for Ann Malloy was sent? 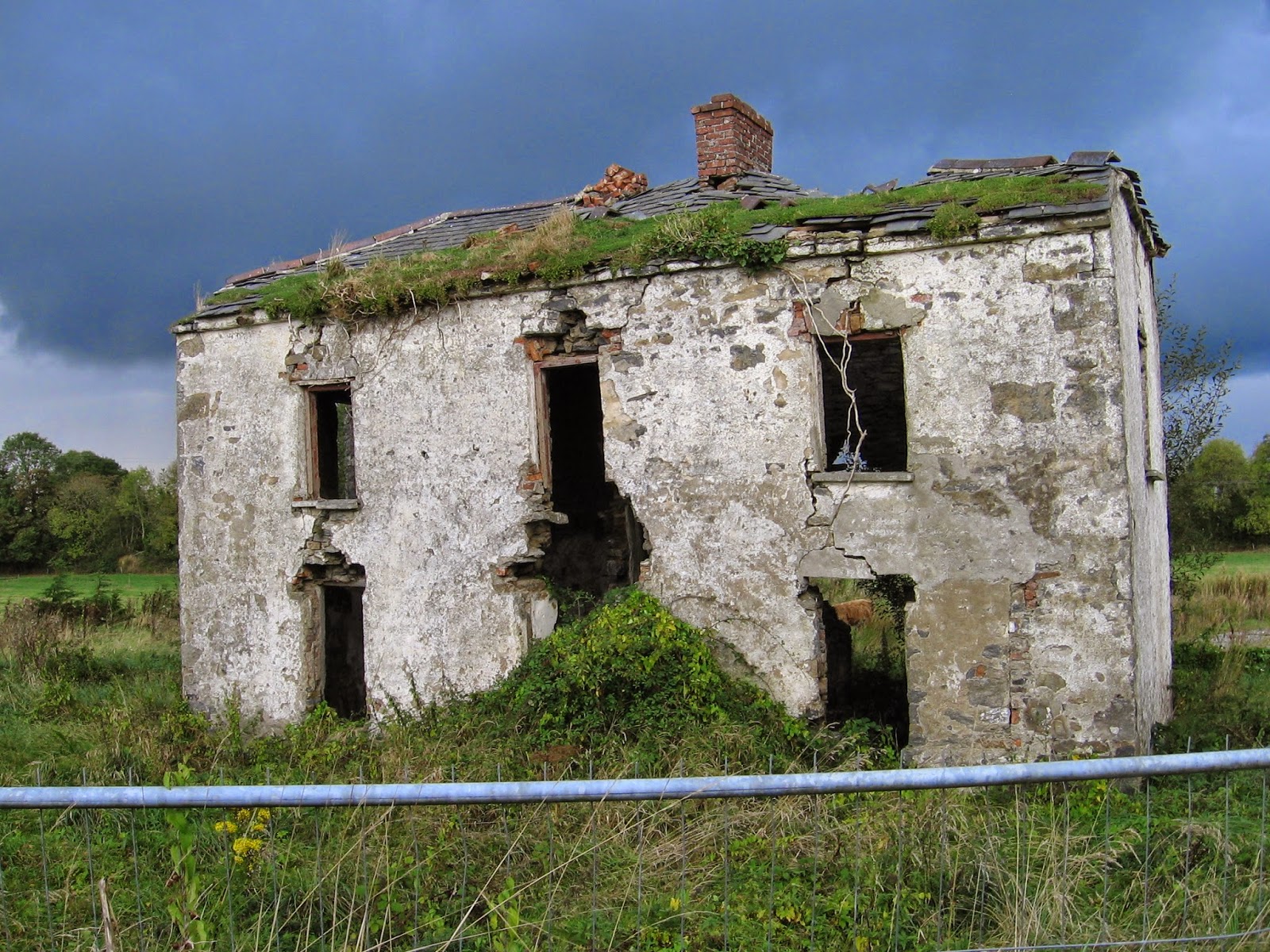 We had tried entering the coordinates for the Mason estate in our Garmin, but for some reason, it would not accept one digit in the series. We couldn't make the thing register. Whether this was the very location of the Mason property, I guess we'll never know. It may have been yet another case of the navigational system failing us. It may have been operator error. Maybe the original numbers were transcribed into the Landed Estate Database incorrectly. Who knows.

Whatever the verdict on the building, our daughter noted--now that she has been studying such things during her time at University College Cork--that the Irish rarely lived in two story buildings, though that would have been a traditional construction used by the English. The countryside we were driving through was undoubtedly the very land once occupied by our Flanagan and Malloy ancestors. Beautiful, very green and fertile, yet remote, the place was another testament to the beauty left behind by desperate emigrants in search of a better life somewhere else. 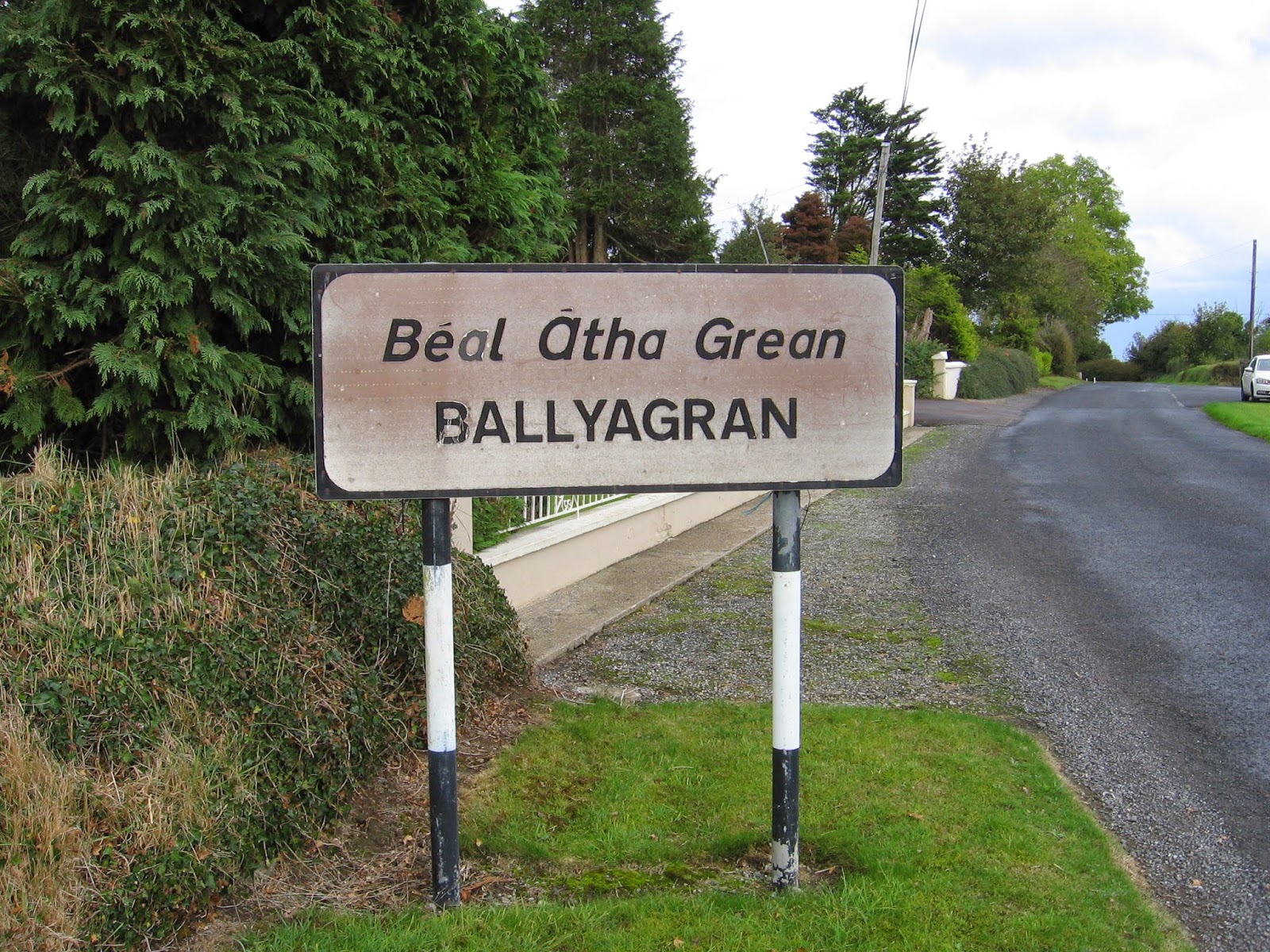 Photographs: Deserted building in Cappanahane, County Limerick, Ireland, near the former estate of the Mason family; sign marking the entrance to the village of Ballyagran in County Limerick; both photographs courtesy of Chris Stevens.
© Copyright 2011 – 2021 by Jacqi Stevens at 2:51:00 AM