How to explain the experience of driving the roads of Ireland?

They are the opposite of roads in our own country.

"DRIVE TO THE LEFT" says the sign in bold block letters posted above the dashboard on our rental car. Evidently, we are not the first ones needing such a reminder. As my husband likes to point out, though, he is quite comfortable with driving the wrong way down a one-way street; he's done it all the time. Only difference: when he used to do it, he was equipped with lights and a siren. Not so, this trip.

Couple that handicap with the unnerving habit of Irish drivers to come hurtling down the road, driving smack in the middle. Oh, they would get out of your way, all right: swerving just in the nick of time to avoid a collision. There were, however, those telltale signs of "scrapes" on all the local cars, hinting as to the success of such a strategy.

There was yet more to occupy our limited attention: the frustrating tendency of the city fathers in Cork to give names to their streets—which changed, incidentally, from block to block—yet not inform the unwary visitor that the name was not at all meant to correspond to the plaque displayed at the street corner (if there was one there at all). Apparently, those details were a sentimental vestige of days gone by, not landmarks of any use to those currently rushing through the twisted alleys leading to the city centre today.

After our obligatory daily hour spent getting lost on the streets of downtown Cork, we finally caved and got ourselves a Garmin. Thanks to the generosity of one of our daughter's friends, we were now armed with equipment to get us through the streets of the city—all the while telling us to turn left on ABC Street where the street sign called the road XYZ Street.

See? It all makes perfect sense! But only if you are a Cork native. Or perhaps a descendant of a Cork native. Maybe that is why the Irish are so reticent to submit to DNA testing: it will reveal their secret sauce for knowing one's way around the city.

After a few days of such experiences, as you can imagine, it was a relief to know we would be heading out of the city and exchanging these harrowing trips for a relaxing drive in the country. We were headed north to the far end of County Tipperary, where we would follow the trails of our Tully and Flannery ancestors in the village of Ballina and its rural environs. What could be more peaceful than that?

There turned out to be one feature of city roads in Ireland that had its corollary in the country: the narrowness of the alleys. Yes, in Ireland, two bodies—at least the four-tired kinds—were intended to occupy the space allotted for one.

We had yet to learn the secret behind such physics when we turned off the main highway leading beyond the city of Limerick and on toward the northeast in County Tipperary. Thankfully, when we took our exit, the sun had not set quite yet, so we had traces of daylight to power us onward.

The roadside, admittedly, was beautiful. There is no secret to the source of the lush greenery surrounding us at every curve: the rain, present every day we were here, kept the countryside well hydrated. The staunch standings of hedgerows hemmed us in to our narrow country path—sometimes limited even more severely by low stone walls right at the lane's edge. The climax of the beauty—and our accompanying terror—seemed to be when hedgerows, vines, and trees swelled overhead to encircle us in one shroud of greenery.

Us, I might add, and the oncoming traffic. Two bodies. One space. And all.

I wouldn't have told you any of this—my husband is, after all, an excellent and experienced (professional, I might add) driver—except that I needed to set the stage for the episode which concluded our stay in Ballina. After our visit to the local businesses, the Heritage Centre in nearby Nenagh, the local libraries, the church and cemetery, we had one more excursion to take.

Since I had found our Tully ancestors on the Griffith's Valuation just before their 1850 emigration, I knew the townland where they had once lived: a place called Tountinna (though entered in Griffith's, with what was likely an error, as Fountinna).

Having found that detail late in the research process, I hadn't given the location much thought. I had tried my best—thanks especially to those online who had sent links to maps showing the specific area—to correspond the 1850s tax records of the property with modern maps of the area. But since the Tullys were farmers once they arrived in Canada, I had assumed that was their occupation in the lands where they had once lived.

Their Irish property, as it turns out, was unlikely to have been prime farmland. Tountinna is the highest point in the Arra "Mountains." The townlands taking their name from this summit sloped to the west from the height of 457 meters—less than two thousand feet. Modest as that height is, at its top, it affords a spectacular view of Lough Derg and the three continguous counties—Tipperary, Clare and Galway—as we were about to find out. Anne, our accommodating host at the bed and breakfast where we made our weekend stay, had taken an interest in our research project, and had thought of another way in which she might be of assistance to us.

Part of our goal, you see, in coming to the precise home of our Tully and Flannery roots was to walk the very same land which they once walked. That, of course, would mean at least driving to the land where they once lived. And that land was somewhere on that mountain.

If we thought the road into the village of Ballina was terrifyingly beautiful, we were about to be astounded with an even more breathtaking experience.

Thankfully, our host had second thoughts about sending us up that mountain road unprepared. She promised she would escort us if we could return after her midday appointment. We gladly took her up on her offer.

And so, following our local guide, we began our ascent of the hill which once was home to our ancestors. Starting at the width of road which, country style, brought us into the village of Ballina, we followed Anne upward through twists and turns, brush and eroded dirt beds where pavement once covered enough space for tire tracks.

We learned the trick to occupying that one space with two vehicles: one would cordially pull to the side—where there was a side—and let the other pass. Where there was no space permitting such courtesy, one car would simply engage its reverse gear and head backwards to the last wide spot in the road. All along, a cordial finger would be extended from the tightly-gripped steering wheel in acknowledgement. And a stop to talk with a "neighbor" was often in order.

At one point—where the pavement ominously gave way to mud—Anne stopped and asked if I would like to come join her in the lead car. That way, she could explain what we were passing, and I—with white knuckles still clutching my printout of the area's historic maps—could guide her with whatever geographical landmarks I could discern from my records.

Occasionally, we would stop and shout back to my husband and daughter to take a picture of a detail we were passing, in hopes we had the right location. We were looking for the edge of the townland of Tountinna at its border with Killary.

At one point, Anne mentioned that there was still a Flannery man living up in these deserted parts toward the top of the hill. As we plowed ahead—I, and undoubtedly my husband, thankful that there was at this point no oncoming traffic—she came upon a lone hiker with his dog. Pulling alongside the man, she realized it was a friend of her son, so she stopped to ask about the Flannery property. He told her the man lived just up the road and was at home.

So we pulled in the driveway, and met a Flannery on Tountinna.

But he wasn't related. Just as Anne had done the other day, he was quick to mention he wasn't "from here." But he had been here long enough to take a look at my maps and try to direct us to the right spot in the road where our Tully place might have been. We feel pretty certain that we had already crossed that spot in the road, near the stream showing on the map.

Since we were so close to the summit, we pulled ahead to the top. This being the highest peak in the area, it was used for telecommunications towers, so the road was somewhat maintained, though no one else was in the area. Stopping at the top, we got out, thankful that the rain had paused long enough to let the wind clear the clouds away. In the brief showing of sunshine, we took a long look around the entire 360 degree vista, taking in the same view that perhaps our Tully and Flannery ancestors claimed as part of their personal riches over one hundred sixty years ago.

Though the view was priceless, it couldn't possibly be sufficient to feed a family. Certainly not adequate for paying the rent.

You can't walk away from sights like this without understanding why the Irish in America always sang of their fond memories of the places back home. There is no picture which can do the experience justice. 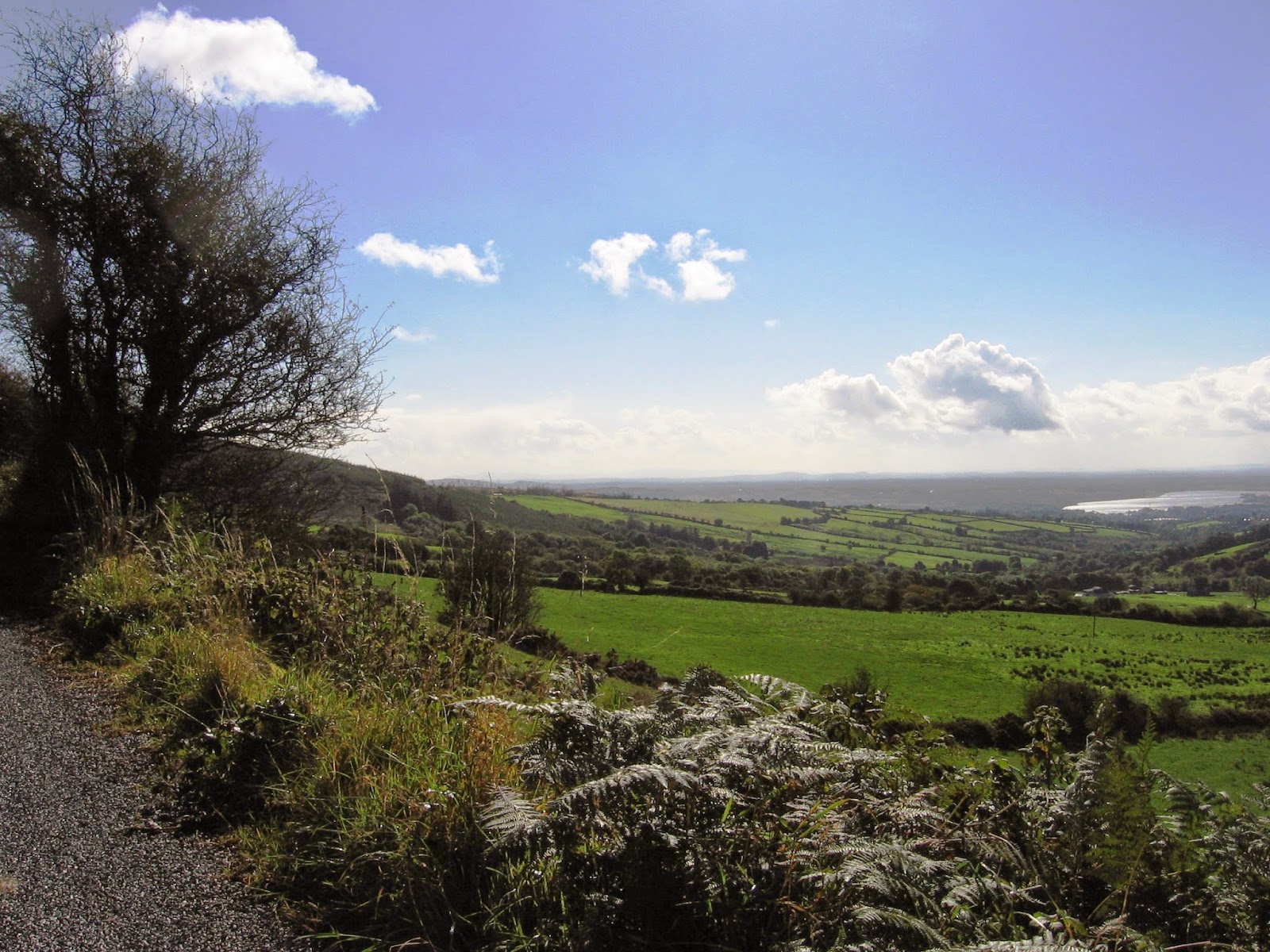 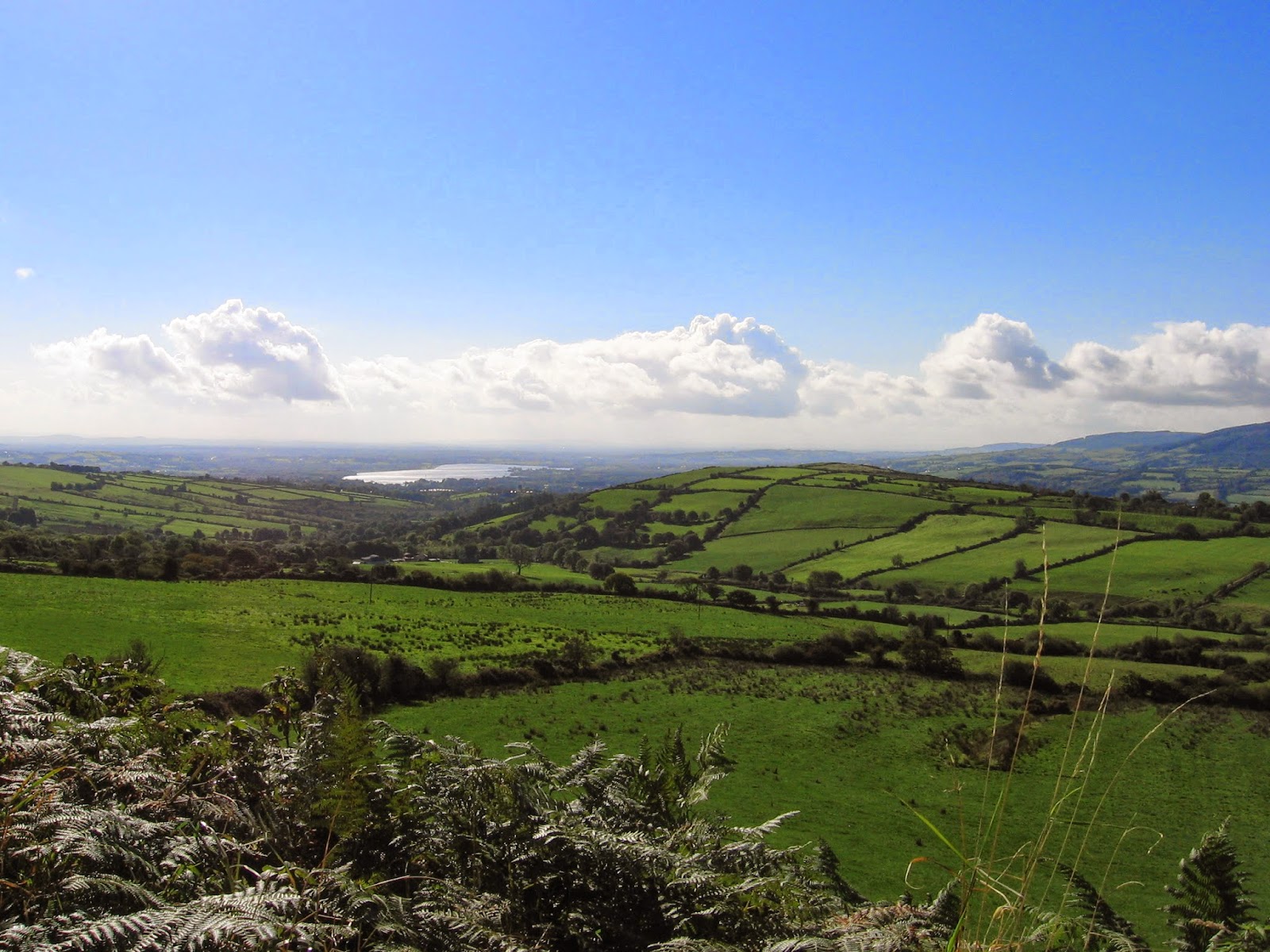 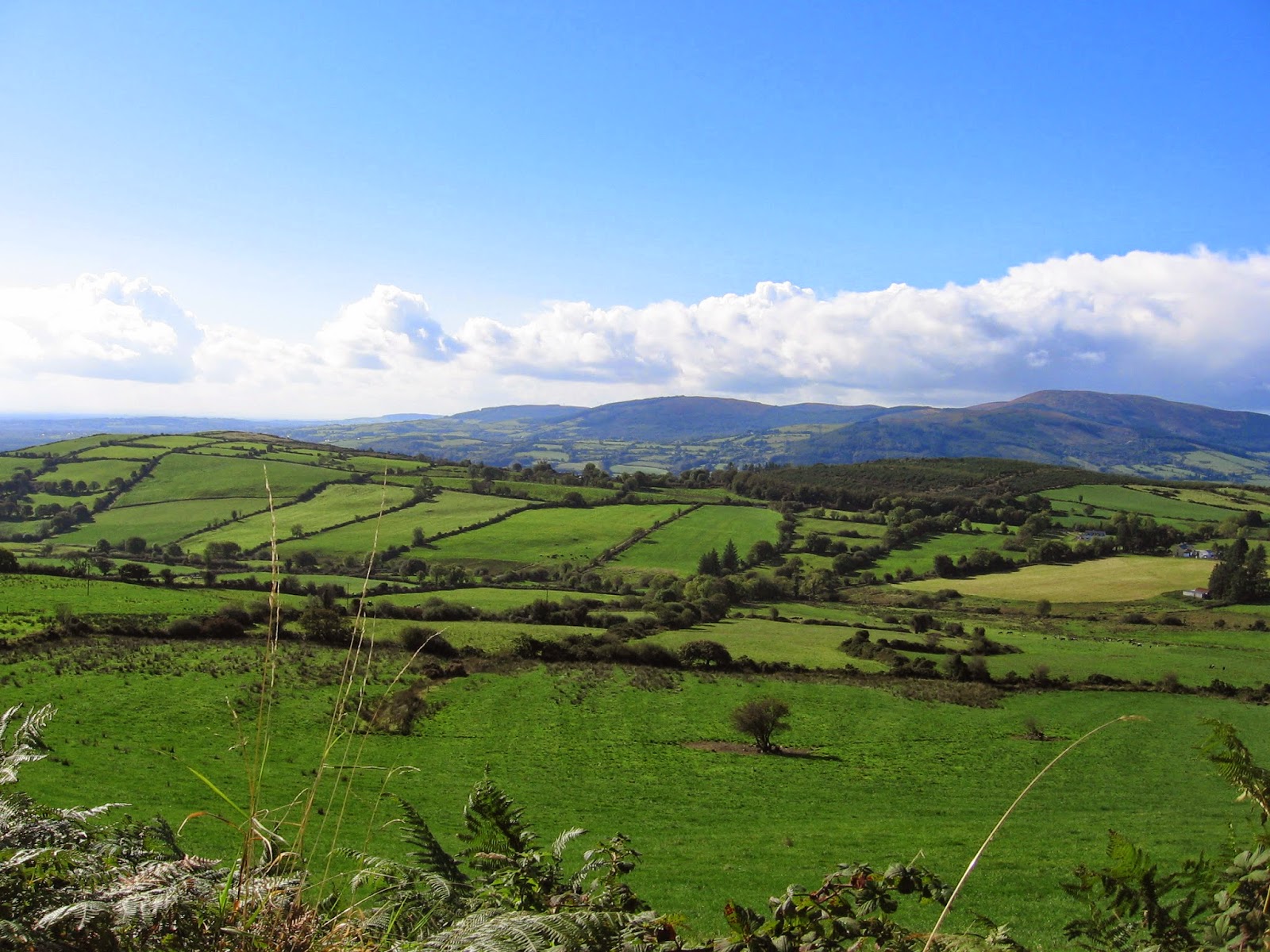 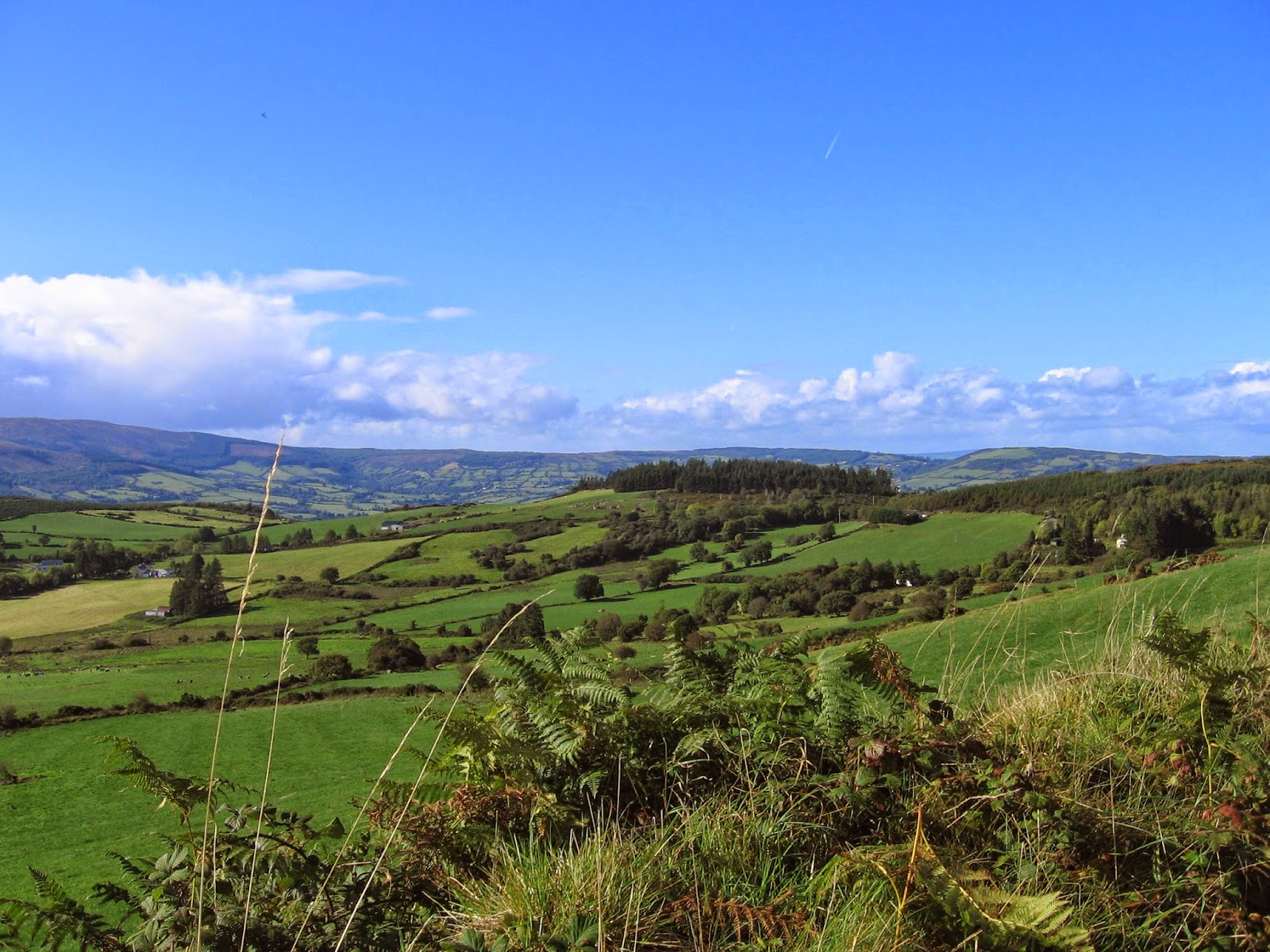 Above: set of four photographs representing a possible panorama from Tountinna to the west, facing back from the upper road on the mountain toward Ballina, as might have been seen by the Tully family from their property in the Tountinna townlands. The lower portion of the lough can be seen in the distance in the first two photographs. 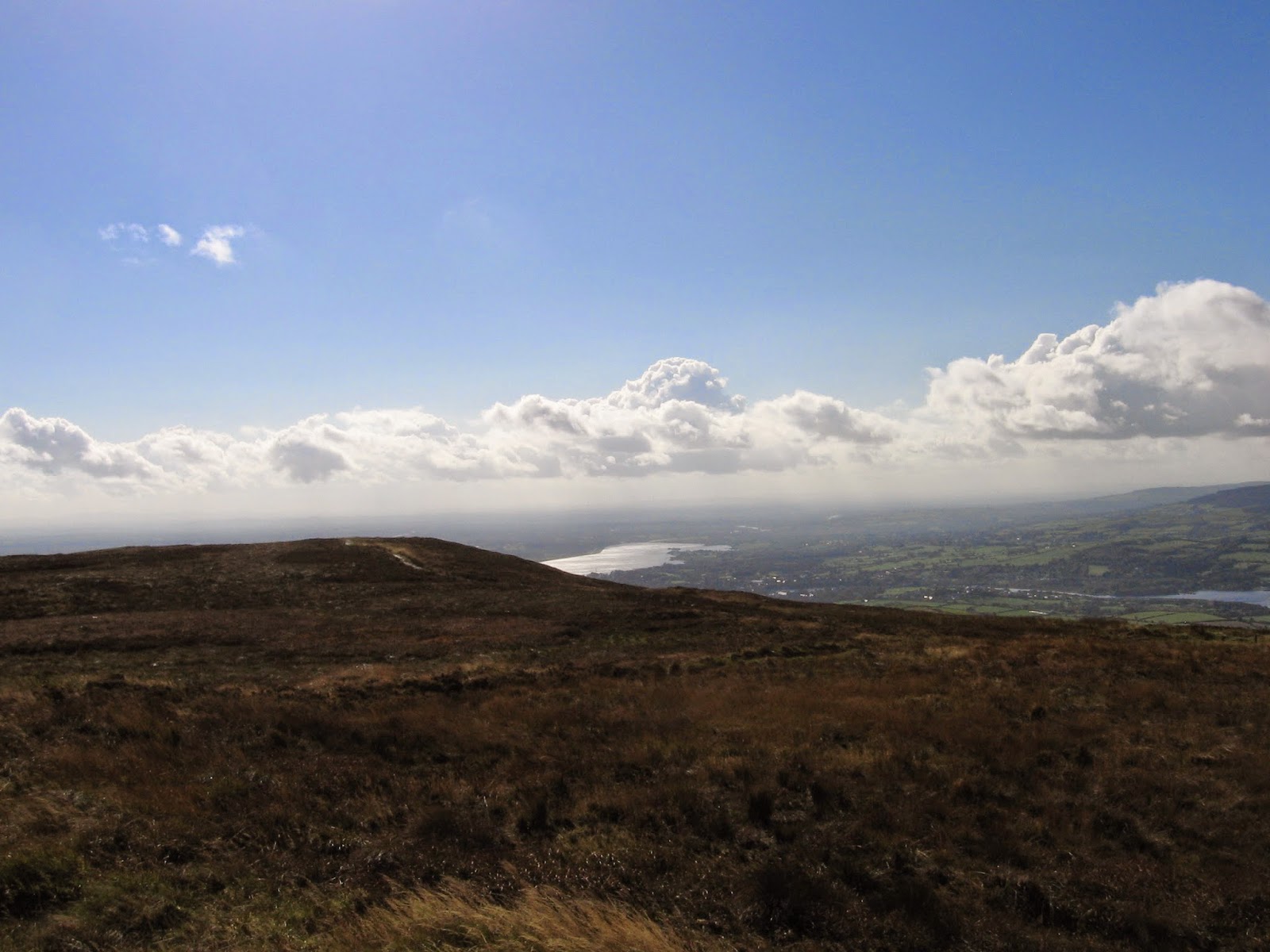 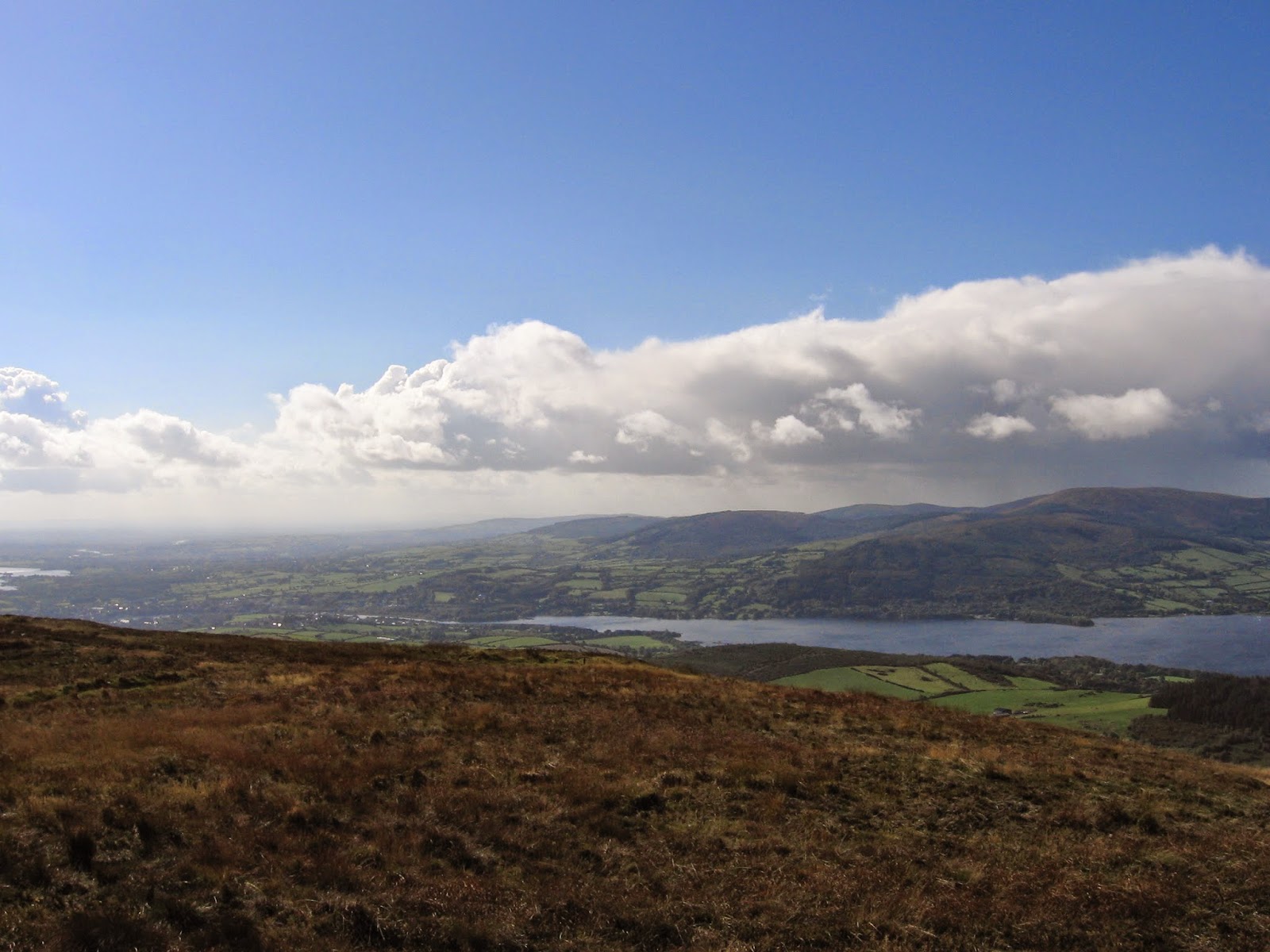 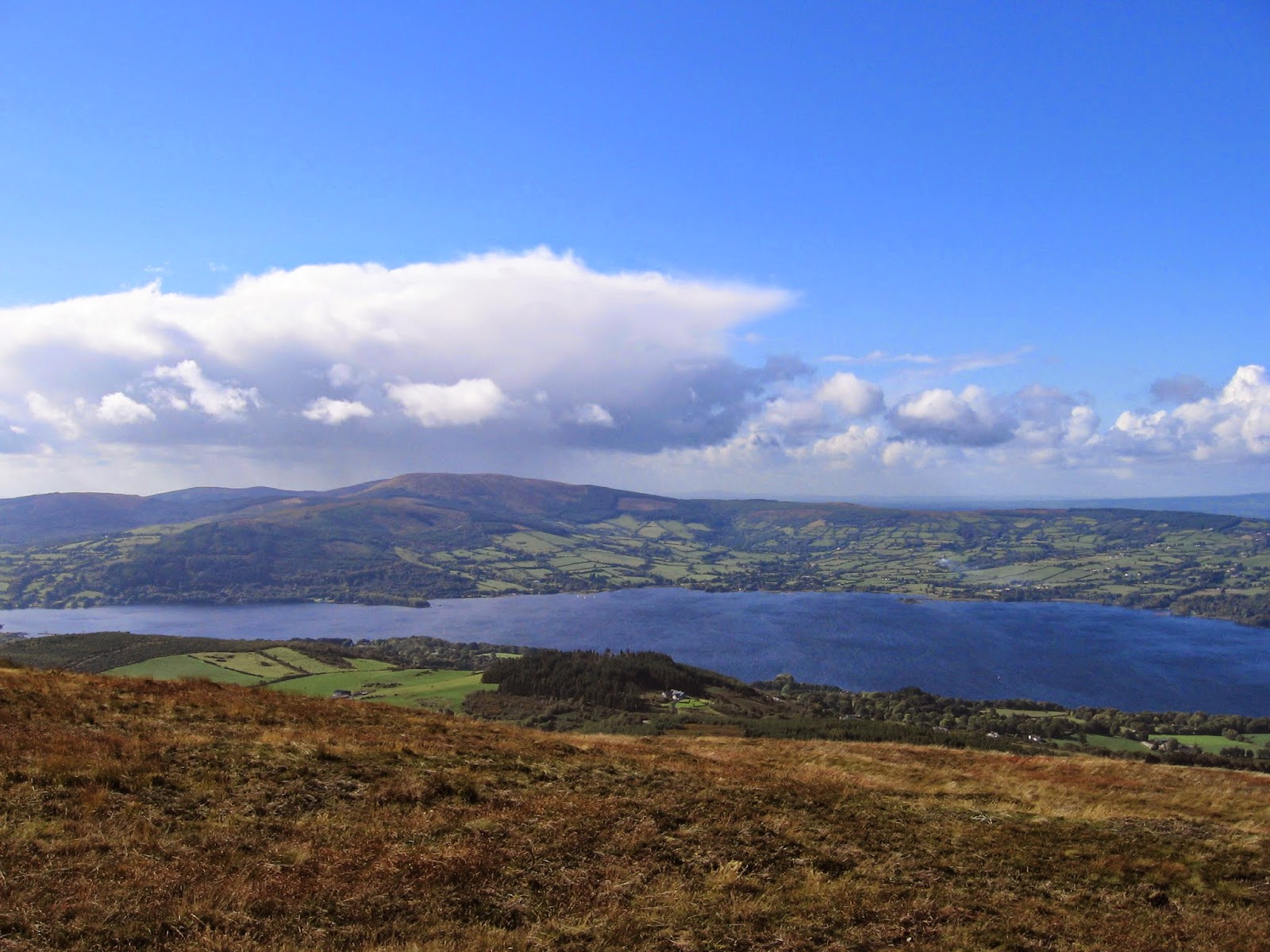 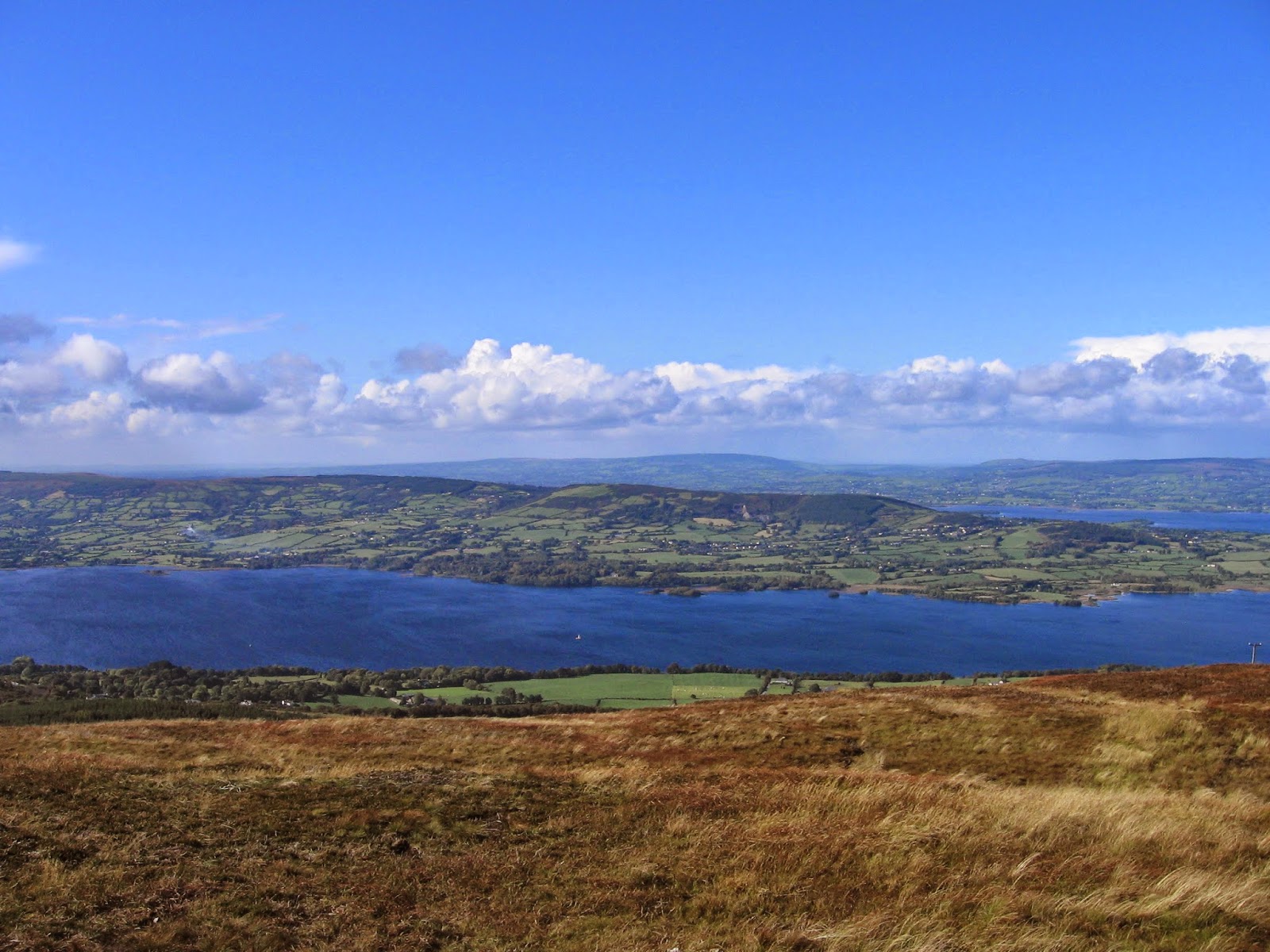 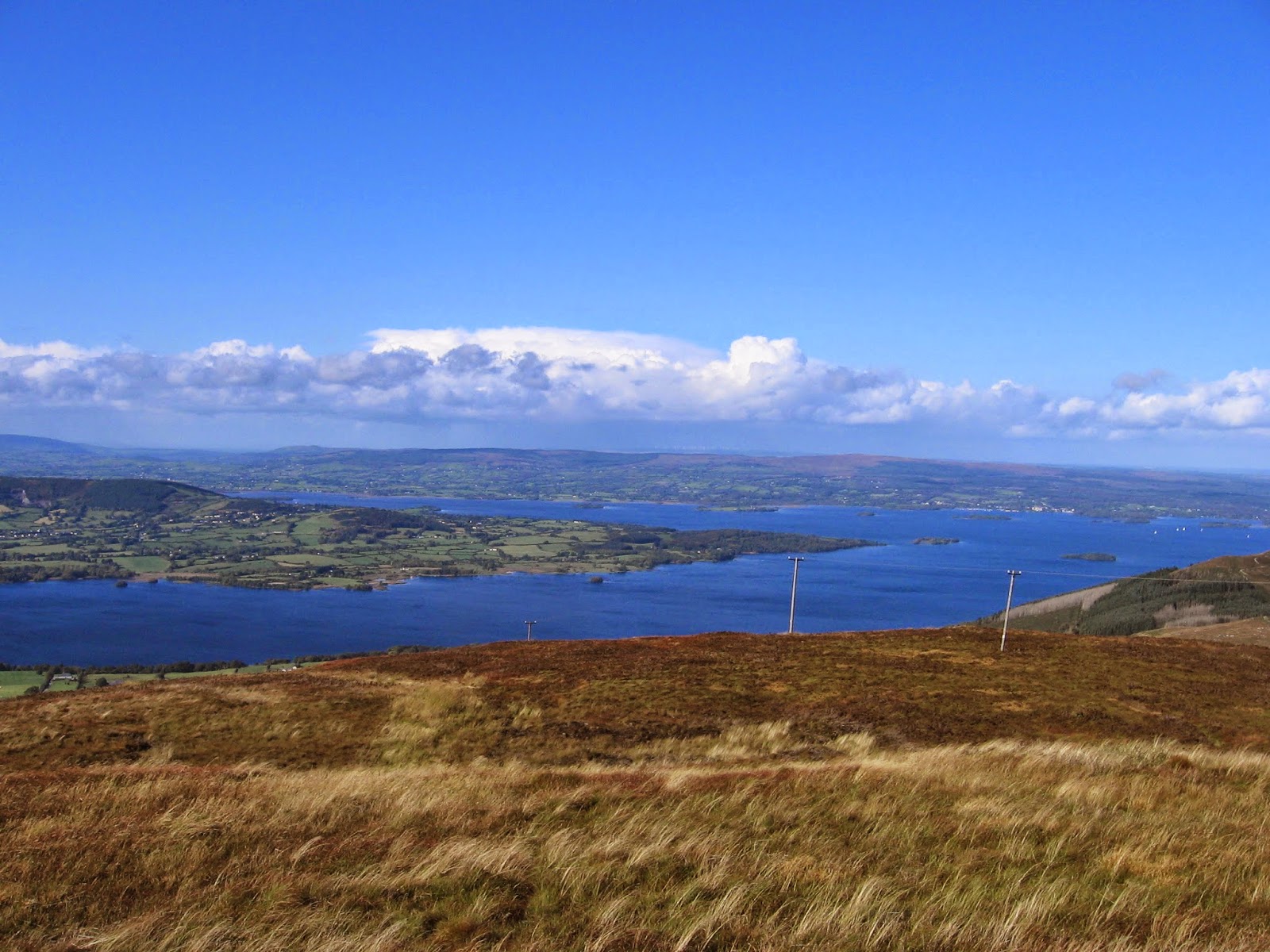 Above five photographs: Panoramic view from the top of Tountinna, beginning from the view back toward Ballina in the first photograph, then turning away from Ballina over the crest of the mountain toward the farther reaches of Lough Derg and beyond in the subsequent pictures.