It's been a treat, visiting here in Ireland. Most of all, I'm grateful for the opportunity to visit my daughter, who is currently studying anthropology and Irish cultural subjects at University College Cork. Between her summer semester class, studying Ireland's archaeological heritage, and her exposure to the history and culture of the country in her classes this fall, she has had the opportunity to visit several significant sites around the country. She has certainly served as our unofficial tour guide when we've stopped at the many ruins along the roadsides, explaining the significance of architectural details of castles, abbeys, round towers, ring forts and monasteries.

As wonderful an opportunity as it has been for our daughter to study these architectural and cultural gems up close and in person, as she mentioned to us yesterday, it does have its drawbacks. How did she put it? Not exactly "if you've seen one castle, you've seen them all." But close. As she explained, every castle seemed to have the same features built into the plans for its defense, so once you've seen those features—the circular staircases, the "murder hole," the oubliette, the channels to funnel burning oil—you've seen the basics of every castle's defense system.

So, for us to be driving along the highway in Ireland, spotting a sign pointing to yet another castle, would not indicate an enticing road stop for her. She's got that floor plan down pat. Perhaps, even in the very short time she has already been here, you could say she is suffering from Castle Fatigue.

That, however, was not our only reason for visiting Ireland. Together with our daughter, we wanted to visit the sites of specific interest to her own personal heritage. After all, on her paternal grandfather's side of the family, those roots are one hundred percent Irish.

It's been a treat, over these past two weeks, to be able to stand near the very sites where the ancestors of several branches of my husband's family once lived—the Tullys and Flannerys in County Tipperary, the Flanagans and Malloys in County Limerick, and now the Kellys and Falveys in County Kerry. Together with my daughter, my husband and his two sisters, we took the occasion this weekend to drive from Cork to Killarney, bringing us close to the townlands where our Kellys and Falveys originated.

However, sometimes, even the most avid genealogical researcher must set aside the pursuit of ancestors and rejoin civil society to be sociable. Thus, our visit to Ireland has included some all-purpose sightseeing during these same two weeks, including a visit to the Blarney Castle, as well as a tour through the memorial in Queenstown (now known as Cobh) commemorating the last stop of the Titanic at the outset of its fateful voyage. And of course, after our tour of Muckross House on our first day in Killarney, we couldn't have left the area without driving along the Ring of Kerry.

Truth be told, I did manage to sneak in a genealogical moment Saturday morning, when our bed and breakfast host in Killarney called her cousin to ascertain the directions to Lisheenacannina in County Kerry, site of the baptism of one of the children of John and Johanna Falvey Kelly. She was sure to give me her cousin's name—she was a Sullivan—so I could drop in at any of the neighbors' homes, drop that cousin's name, and pepper those neighbors with questions about my husband's great-great-grandparents. Wouldn't you know it, but when I pulled out my copy of Griffith's Valuation to show her the name of the townlands—she hadn't heard of the place, herself—it happened to have several Sullivans listed as neighbors of our Kelly family.

"Oh, Michael," she said, picking out one of the Sullivans listed in the townland's read-out. "That's the name of my grandfather." Who knows? Even if we aren't related, perhaps our ancestors were next door neighbors. In a place where people used to live in the same geographic locale for generations, it certainly could have been possible.

Though our host drew out a map for us, and though we were already doubly covered with both a Garmin and an iPhone navigator, wouldn't you know it, but we found ourselves taking the wrong country road. While the views afforded along those narrow lanes were breathtakingly spectacular, I have to confess, we began to suspect that the road along the next country road might have been quite the same.

I'm afraid I'm beginning to lose my verve for ascertaining the exact place where each of these familial lines once walked. We did backtrack to try and regain our directions, but once we passed an old cemetery—complete with abbey and tower—the Ooh, Shiny Syndrome kicked in, and we were off the beaten path. We wandered the old section of the graveyard, seeking Falveys and Kellys—we found only two Kelly families from the area buried here, wherever "here" was—and then decided it was time to ditch the genealogical pursuits and head for the coast. 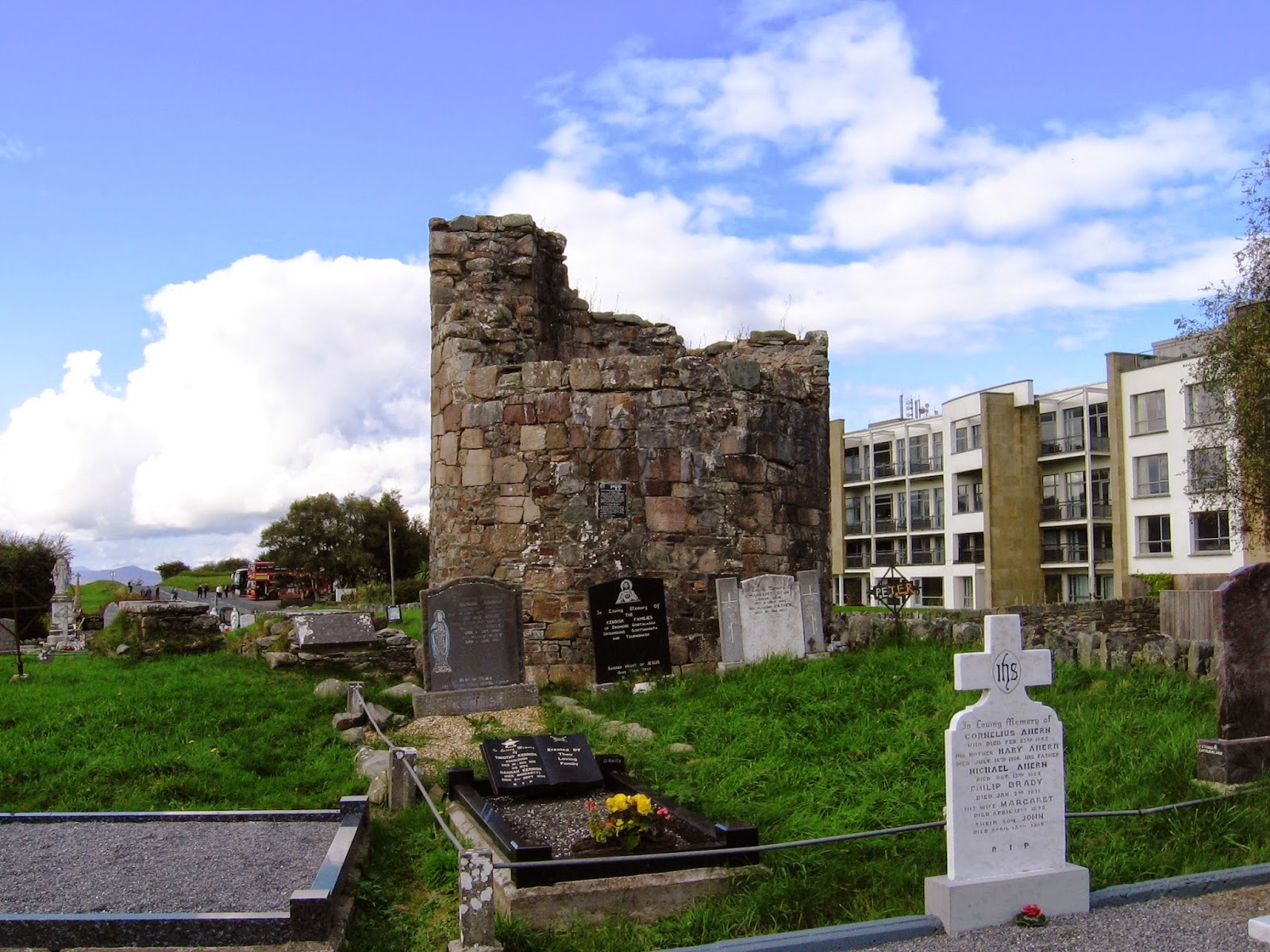 We drove along the "Wild Atlantic Way"—meanwhile, I practiced my isometric exercises—and arrived at Portmagee in time for an early dinner. While we passed a number of signs indicating the ruins and other heritage sites along the way, perhaps it was our intrepid driver's intent to retrace our steps home to Cork before dark that dampened our desire for any more exploration. Or perhaps, we all had become weary travelers suffering from Castle Fatigue. 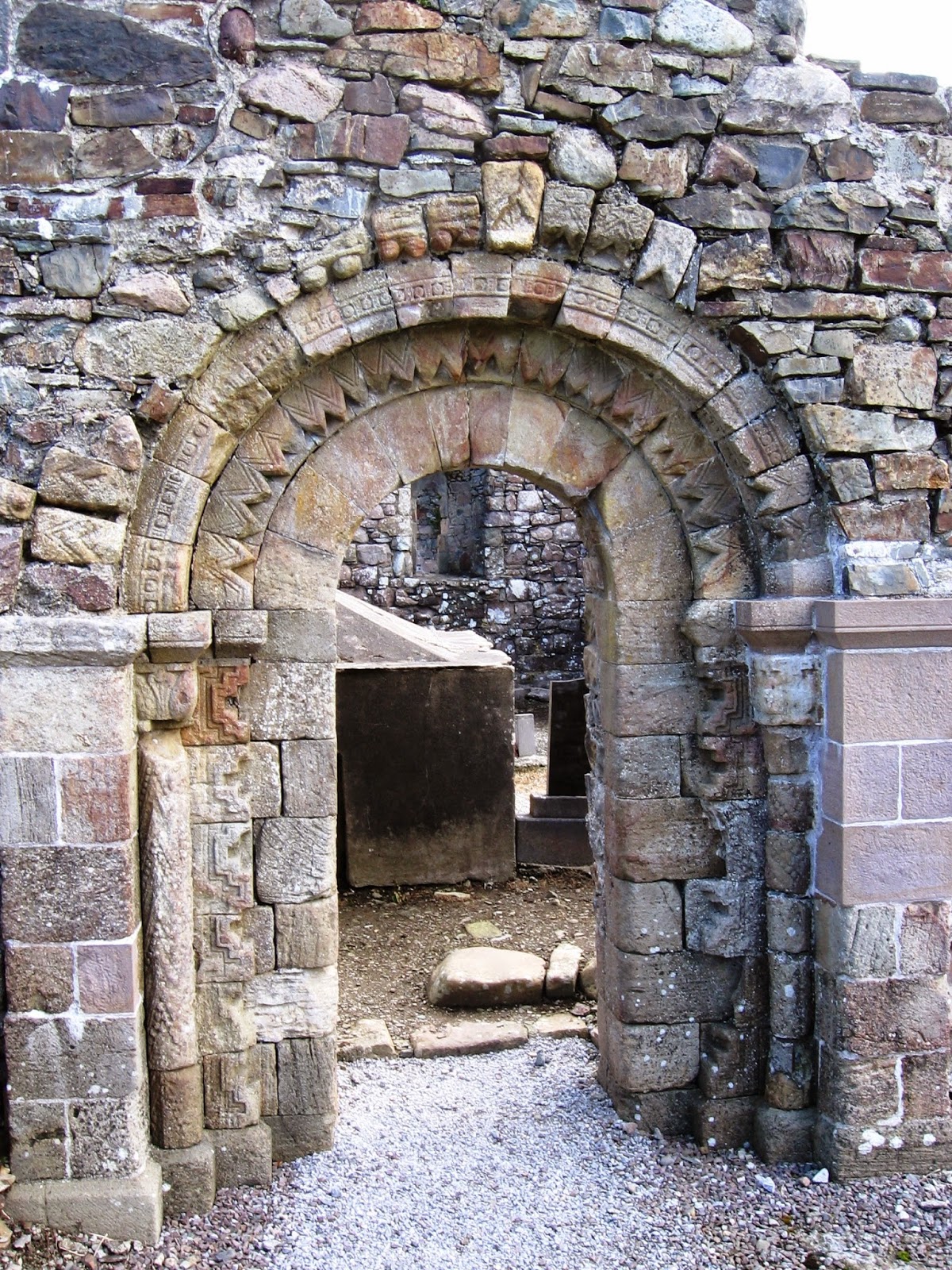 Photographs, above, of the Aghadoe Church, cemetery and Round Tower in County Kerry. Photographs courtesy of Chris Stevens.