Gone Over to the Dark Side

In a move that’s sure to garner me a lump of coal in my stocking for Christmas, I’ve gone a-wandering through forbidden fields. The struggle I’ve mounted to uncover the story behind the connection between Fort Bellefontaine in Missouri territory and Fairfield County in the new state of Ohio has yielded me little. I’m still puzzled about what connected the widow Elizabeth Howard Ijams with the widower John Whistler—and later, forged the connection between John Jay Jackson and Elizabeth Ijams’ daughter Sarah. Frankly, I feel as if these stubborn forebears refuse to come out of hiding.

I confess: I’ve gone looking for what others have posted online for those intransigent Jackson and Ijams ancestors.

I know: shock and disbelief. Lectures on how you need to do your own research. Scoldings for not relying only on source documents.

Yep. A lump of coal in my stocking. This Christmas.

So…now that we’ve gotten that out of the way…do ya wanna know? Aren’t you just a bit curious?

I don’t know about anybody else, but when I hit a brick wall, I’m not opposed to taking a peak around and seeing if anyone else has found a chink in the masonry, a toe-hold or a hand up. Of course, I’m cautious to see if I can replicate any results others have already found. But I’m not averse to learning from my peers. After all, I’m not that good at re-inventing wheels.

My thinking was: if I could find someone else in the family constellation for whom documentation could be located, perhaps those papers would reveal a hint of a trail. Perhaps another child in the family died after the date in which states began collecting additional personal information. Perhaps a report of a sibling’s birth location different than the other children’s might reveal travels that I hadn’t previously anticipated.

At any rate, cut me some slack, you who are saintly genealogists. The need to know has led me in the path of temptation, and I have yielded.

Onward to the dubious world of online genealogy. My first stop was to FamilySearch.org. Not to besmirch their name—I’m so grateful for all the documents I’ve found at this resource—but here I found my first indication of squishy reportage. Searching for Sarah Howard Ijams, no documents popped up in the search results. However, there was an item from the Pedigree Resource File.

Alright, I know it: warning bells are going off in my head as I speak. The file indicated Sarah was born October 6, 1798, and died February 12, 1829. Of course, no source was cited for those dates—dates I’ve already struggled to verify. How did the supplier of this information know these dates were correct?

Next came the marriage information. The file named John Jay Jackson as the groom—no surprise here—and the event’s date as January 25, 1818, in Saint Louis. Both those latter details may actually be correct. I’m a bit more convinced now than I was before about the marriage location in the Saint Louis area. And the year of 1818 is more acceptable to me than the other entry I’ve seen of 1816.

Seven children are listed in this file, though unfortunately not in date order. The firstborn arrived in 1819, and the last on December 30 of 1828. These two dates at least frame the possible time span between marriage and Sarah’s early death. An infant’s arrival that late in the year could actually have been what precipitated Sarah’s demise.

There are other online resources, too. Of course, the narrative that I’ve already mentioned—that of Sarah’s mother’s second marriage to John Whistler—included a statement that there were ten children in the Ijams family. Where are the other three?

Other online files give more of a hint as to what happened to the Ijams and Jackson families. The disputed count for the number of children in the Jackson family shrinks to six in a Rootsweb file here, but reveals information on John Jackson’s own second marriage. Another Rootsweb file, focusing more on the Ijams ancestors, shows no descendants for John and Sarah, but provides ample resources for tracing Sarah’s Ijams family back multiple generations.

While I cannot just appropriate the information found online as impeccable truth—I must exercise my own due diligence in checking these lines myself—when confronted with a bewildering maze of false leads, it helps to lift up one’s head and take a look around. Why insist on playing the trailblazer on the edge of civilization when you can lift your blindfolds and take a look around. Who knows? You may discover you are actually walking in an urban jungle with a road map already in your hand. 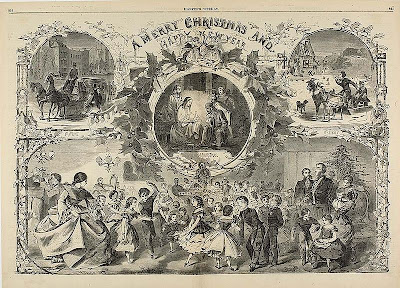 Picture above: a print by Winslow Homer entitled, "A Merry Christmas and Happy New Year," published in Harper's Weekly on December 24, 1859; courtesy Wikipedia; in the public domain.
© Copyright 2011 – 2022 by Jacqi Stevens at 2:44:00 AM
Email ThisBlogThis!Share to TwitterShare to FacebookShare to Pinterest
Labels: Howard, Ijams, Jackson, Online Resources, St. Louis MO