A Year in Review

After Modern Man conquers the Christmas Rush, the next tendency is to prepare for the Year To Come by reviewing the one he is about to leave.

I couldn’t help but cave and fall into that tendency, myself. Not that I’ve managed to be completely ready for Christmas—that’s something I’ve never been entitled to claim—but let’s just say…well…it’s been a tough year. And those kinds of memories tend to linger and make their presence known, especially as anniversary dates draw near.

Just as Christmas was drawing near in 2011, our family was preparing to make a trip to Kansas to visit the cousin whose battle with cancer was not faring well. She was the cousin whose daughter we visited recently, whom I just wrote about the other day.

In the interim between that last Christmas and this, there have been happy events—such as a niece graduating from high school and being accepted into the prestigious University of Saint Andrews—but unfortunately, the year seems to be capped off with further sad news. Besides all the tragedies which have grabbed the national attention in the past weeks, our extended family has been beset with personal losses. I sometimes have to remind myself that my melancholy mood, in stark contrast to that of the season’s most effective PR campaigns, is less likely owing to a bah-humbug attitude as it is to the loss of a sister-in-law, then a relative’s mother (and several children’s grandmother), and the six month old baby of that relative’s cousin.

In this month of tinsel and glee, there are some who find it beyond them to lift their spirits and join in the festivities. Of all the people needing the comfort of Christmas, these are the ones.

I don’t suppose I am alone in this holiday ambivalence. Right now, ask the residents of a certain town in Connecticut how joyful they feel. Or check in with any shopper at a particular well-known mall in Oregon—with the holidays upon us now, how are these people bearing up? 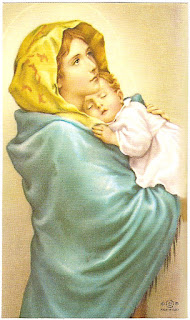 With these sorry thoughts rumbling in the back of my mind, I was searching for some tokens of the season to use for my Christmas posts, from among the family history minutiae gathered over the last few years. Though this one choice I’ve found is not old (it’s not even weathered), and though it actually defeats my efforts to “snap out of it” and join the Christmas cheer (it’s from a funeral card), it does carry a well-known yet fitting thought for the day.

The card was used to commemorate the passing of my husband’s cousin—the husband of the relative we lost last January—and includes his name and the framework dates of his life. The picture itself, of course, is quite fitting for this season in which we commemorate the birth of Jesus Christ.

It’s the thought on the reverse of the artist’s rendition of mother and child that offers a soothing balm in this time of pain-overlaying-holiday.

You surely know this little saying well. It is quite famous. It has actually been prayed by thousands, no doubt—my husband prays this very prayer, himself, every morning.

In reading the words to this prayer today, though, please put all thoughts of the routine—the memorized—out of your mind. Look at these words with new eyes. Don’t let the mundane, the synchronized monotony, rob you of the meaning of its expression. While God grants us peace in our turmoil—while He is our source—it is we who must be willing to take the action of turning around and heading away from the pain—and all that caused it—and into the new direction of peace.

May you be strengthened to take that step this Christmas. 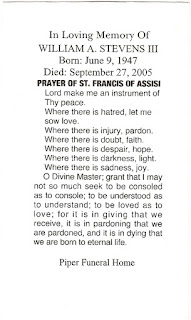 Prayer of St. Francis of Assisi

© Copyright 2011 – 2022 by Jacqi Stevens at 2:43:00 AM
Email ThisBlogThis!Share to TwitterShare to FacebookShare to Pinterest
Labels: Holidays and Genealogy, Keepsakes, Stevens