Searching Through the Next Generation


My hope for most weekends is for a time when I can set aside the usual routine and delve into the research problems that have me stumped. Of course, that was my hope last week, despite writing about missing the primo genealogical event of the year, or how I am doing my small part to give back to the genealogical community.

My focus right now is in finding a way to return an abandoned photograph of baby Fayetta Mae Randall and her young mother to a family member who would appreciate having it.

I am not doing so well with that current goal. Besides stumbling upon the tragic story of Fay's uncle and how he and his wife suddenly lost their lives just before Christmas in 1940, I haven't really figured out just how Fay, a girl from Elko, Nevada, ended up marrying an Italian immigrant's son in the Bay area of northern California.

But why mull over getting stuck in our research? There are other clues to pursue. We may not learn how Fay and Joseph Panuzzi first met, but we do know they got married. And they had three children—two of whom are still out there...somewhere.

It would be wonderful if this little Azo picture postcard of their mother and grandmother could find its way to either of them. That would be the ideal. In the meantime, I'm having a hard time, given the array of fellow researchers who have their family trees posted at Ancestry.com, finding one family historian who also happens to be a close relative to Fay.

Meanwhile, best I can tell, not only did Fay and her sisters remain in the Bay area for the rest of their lives, but so did Fay's husband and children—at least for as long as Fay herself was still here.

It was at the relatively young age of fifty seven that Fayetta Mae Randall Panuzzi passed away in Contra Costa County, California. That was in December of 1974.

Less than two years later, Fay's mother—the woman writing on that photo postcard of her infant daughter back in 1917—by then remarried, passed away near the end of May, 1976.

Almost twenty five years to the day after losing his wife, Joseph Panuzzi died in December of 1999, by then having left the Bay area for the northern reaches of California.

I doubt that little postcard made its way to the Jackson, California, antique store where I found it from the liquidated estate of Joseph and Fayetta Panuzzi. Perhaps it found its way there from the belongings of the woman for whom the postcard was originally intended: someone living in a tiny spot in Nevada called Red House—a woman known as Mrs. Henry Keefe. 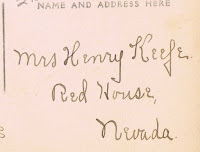 © Copyright 2011 – 2022 by Jacqi Stevens at 2:54:00 AM
Email ThisBlogThis!Share to TwitterShare to FacebookShare to Pinterest
Labels: California, Panuzzi, Randall