Off the Shelf: The Foundling


Yes, I talked about books yesterday, but those were not volumes from off my shelf—yet. I do have a book I've been wanting to talk about for months, now. Only thing is: it's been on someone else's shelf for the past six months. Now, finally, it's my turn.

I had heard the buzz about Paul Joseph Fronczak's The Foundling way back in the spring and wanted to get myself a copy. True procrastinator that I am, I somehow managed to put off buying it for so long that, during a trip last summer, I emailed my daughter and asked her to save me from myself and purchase it for me.

She did, thinking I was sending her one gigantically obvious hint about what I wanted for Christmas. (What I was really concerned about was not placing a credit card order over someone else's wifi system while I was traveling.)  It took me a long time, after arriving back home, before I realized something was missing: the book.

It did up being slated as my Christmas present. At least that was her intention. But then, since my daughter had held it so long, she forgot to wrap it and give it to me. Thankfully, just as the family was leaving me to spend some vacation time down south with The Mouse (I'm not a fan, though I will agree to spend time at his flagship hotel while my husband attends conferences there), she managed to get the book to me. And thus, I spent this past Saturday lounging around at home, glued to the pages of this story.

Of course, it might not be a surprise to anyone who realizes that I am fascinated by genetic genealogy that I really enjoyed reading Fronczak's memoir. I totally lost track of time while I was reading—thankfully on a day when I had nothing else scheduled—until, nearly halfway through the book, I realized I hadn't yet had breakfast.

It was then three in the afternoon.

As the subtitle of the book reveals, the narrative involves a kidnapping, child abandonment, adoption, and a deep sense of not fitting in. It's not really a book about researching genealogy or testing DNA, though those details fit firmly into the plot line and give the author a chance to mention names we genealogists readily recognize, like Crista Cowan and CeCe Moore. The book is biographical and historical, recounting as background information one of the most sensational—and widely publicized—kidnapping cases ever to occur in this country.

Beside the parts of the story that any genealogist would find riveting, the author's frank observations about what was unfolding as he pursued his central question—who am I, really?—serve to point out realities of DNA testing that some rosy optimists might prefer to ignore: that not all discoveries made through the power of DNA matching lead to stories which end with that tag line, "happily ever after." As Bill Griffeth, author of a similar DNA story, The Stranger in My Genes, observed, revelations uncovered through DNA testing can have a profound impact on even the most willing subject.

The narrative contains several twists and turns, something you might expect from a crime novel. And though this is definitely not fiction—this is the story of Fronczak's own experience—it does involve not just one mystery, but two. I certainly found the book well worth the wait, and I suspect you will, too—only I don't advise waiting quite so long to get your hands on your own copy. 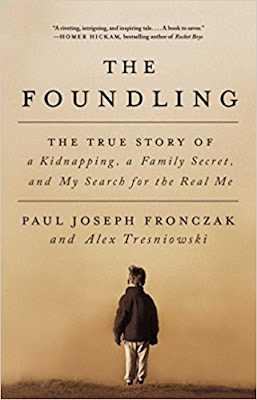 © Copyright 2011 – 2022 by Jacqi Stevens at 2:54:00 AM
Email ThisBlogThis!Share to TwitterShare to FacebookShare to Pinterest
Labels: Books, DNA Testing