In that magical winter wonderland world in which I grew up, Christmas lasted much longer than the twenty-four-hour span of time marking December 25. Besides the fact that we often found ourselves snowed in, at some time in the midst of those twelve days of Christmas, it was nice to enjoy the ambience and relax after the frenzy of gift giving.

Last night marking Twelfth Night, today is denoted in the Christian church calendar as Epiphany—a day representing a concept co-opted by many outside the church world to designate a "sudden manifestation or perception of the essential nature or meaning of something."

I don't know about you, but I'd much rather have an instant realization about an enigmatic situation than have to struggle to understand something far out of my league. Yet, we often forget that, in those days preceding the arrival of the Magi on Epiphany came a long journey of plodding progress. That step-by-step work can be hard slogging—and the payoff to all the effort is not always guaranteed.

At the beginning of a new year, we all have hopes of getting to an "instant" realization: that we've improved our status, gained a financial windfall, lost all that weight, written that book—or, as one monthly goal-setting exercise in a curriculum I once used put it, "learn a foreign language."

Some things are just not sized right for instant revelation. We have to put in the work.

Perhaps it's no surprise that, in the aftermath of failed New Year's resolutions, the book publishing world suffers a spate of new titles promising to fix what went wrong with this year's good intentions. Former publishing CEO and current entrepreneur Michael Hyatt just launched Your Best Year Ever: A 5-Step Plan for Achieving Your Most Important Goals. Beating him to the punch, author and speaker Jon Acuff issued his spin on the dilemma in time for the 2017 holiday shopping season with Finish: Give Yourself the Gift of Done. And though his latest book didn't address the topic directly, writer Jeff Goins has tackled the problem both on his blog and through his free 31-Day Writing Challenge offer to shepherd other writers on toward success.

While Acuff fingers the root of the problem as a symptom of perfectionism and Hyatt points to big goals being upstaged by day-to-day minutiae, both rely on up-to-date research findings to expound what they consider counter-intuitive solutions to rescue your next big idea from failure.

Bite sized pieces, as Goins found, may well be the answer. He designed a program to encourage people to just sit down and do the one small thing today which will eventually add up to a finished project. Then, rinse and repeat. Simple—all except for the grunt work.

It takes consistency to climb that mountain, it turns out, not just the seemingly sudden arrival at fame and fortune—or even understanding. 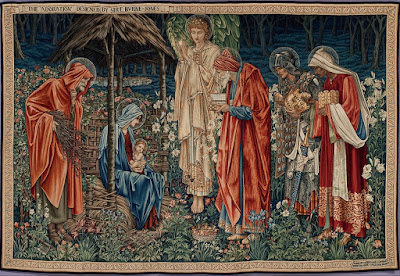 Above: "The Adoration of the Magi," 1904 tapestry designed by Sir Edward Coley Burne-Jones; courtesy Wikipedia via the Google Cultural Institute and Musée d'Orsay; in the public domain.
© Copyright 2011 – 2022 by Jacqi Stevens at 2:52:00 AM
Email ThisBlogThis!Share to TwitterShare to FacebookShare to Pinterest
Labels: Holidays and Genealogy