If you have no idea what I mean by "SLIG Time," let me give you a hint: I'm not in California right now; I'm in Utah. In Salt Lake City, to be precise. At an Institute of Genealogy.

Now, you go put those pieces together. (Didya give up and click the link?)

This year, unlike my previous class forays into genetic genealogy, I chose to take a different learning route: I wanted to soak in every word of a favorite conference speaker and instructor. I'll be spending the week, sitting at the feet (so to speak) of Library of Congress and National Archives veteran, John Philip Colletta, PhD.

The reason I opted to take his course—"Beyond the Library: Using Original Source Repositories"—was because my original game plan was to leave at the end of the week and head straight for Florida, where I've had some research tasks put on hold until I could spend some time at the state archives. I had wanted to delve into the details of just what role my third great grandfather, George Edmund McClellan, played in drawing up and signing the original constitution for the state of Florida.

The planned research trip, alas, fell through owing to other business scheduling conflicts, but I'm still enrolled in the class, and looking forward to a week of furious note-taking. If I have time, I'll post a few of the details as they emerge this week, but if not, the plan is to introduce you to the next subject of my quest to reunite orphaned antique photographs with descendants of the family members shown in the pictures I've found. 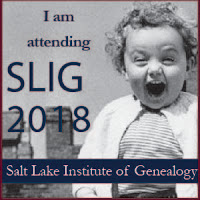 © Copyright 2011 – 2022 by Jacqi Stevens at 2:54:00 AM
Email ThisBlogThis!Share to TwitterShare to FacebookShare to Pinterest
Labels: #SLIGExperience, Conferences, Genealogical Organizations