On Their Wedding Day


In looking at the writing affixed to the photo I found at a northern California antique shop, it was clear what the name of the couple was—at least for the man. William Bernard Hopkins, whoever he was, had a wife named Kate. Whether Kate's full name was Katy Seegar Smith-Allen, as the next hand-written entry on the reverse of the photo mentioned, I couldn't yet be sure.

However, going on the hunch that the cabinet card was produced at a studio in Louisville, Kentucky—I couldn't quite be sure, since an ugly water stain made reading the embossed identification difficult—I looked at documents from the area to see what could be found.

With cabinet cards, it is sometimes difficult to pinpoint a time frame. While there are some guides for estimating photograph dates based on frame styles, they are rather vague, so figuring just when William or Katy were born—or married—became an inexact guess.

As it turned out, though, there was a marriage record for a couple with these same names. Someone by the name of "Wm B. Hopkins" married a woman called Katie Smith Allen at Louisville, Kentucky on November 9, 1899. I'd call that close enough to our couple to count as verification.

With this one document, not only do we find a likely match for our search, but we also find an additional set of hints: the two witnesses listed also bear the same surname as William Hopkins' bride: Allen.

Just on the off chance that there was more than one William Hopkins in a city of over two hundred thousand people, we might want to check out what can be found not only about William's bride, but whether our Katy Smith-Allen was one and the same as this one. Using C. L. and Addie Allen as a gauge will come in handy as we work through this process, especially considering that the bride's name, Smith Allen, might have indicated a previously married woman. Could her maiden name actually have been Smith, rather than Allen?

Having found this record—if it is indeed of our couple—also helps us narrow the date range for this photograph. It's unlikely that the couple sat for their picture much before the date of their wedding, though we can't yet ascertain how much afterwards the portrait might have been taken. But it should be safe to say it dated no farther back than about 1899. 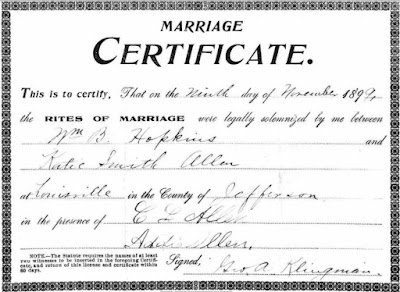 Above: a portion of the marriage record for William B. Hopkins and Katie Smith Allen, courtesy Ancestry.com in collaboration with FamilySearch.org.
© Copyright 2011 – 2022 by Jacqi Stevens at 2:53:00 AM
Email ThisBlogThis!Share to TwitterShare to FacebookShare to Pinterest
Labels: Allen, Family Photos, Hopkins, Kentucky, Weddings