On the Far End of a Short Life


Now that we've found a baby Kate Allen in the 1880 Louisville household of one Charles Allen—and discovered his wife's name, at least at that time, was Elizabeth—I wanted to rush to the other end of Kate's life to see whether our Kate, the one now married to William Bernard Hopkins, was the same Kate who claimed these parents. Perhaps I've attended one too many lectures on exhaustive searches, but somehow the research paranoia has become ingrained in me.

It wasn't too far into Kate's future that it took to find my document goal. Kate apparently suffered from hypertensive heart disease and had suffered two bouts of cerebral hemorrhage. The second attack took her life.

She was laid to rest in an unidentified cemetery in Louisville, Kentucky, shortly after her passing on March 28, 1928. She was forty eight years of age.

Fortunately for our search, Kate's death certificate was easily located on Ancestry.com, showing that the informant was her husband, William B. Hopkins. Even so, I've found that the closest of relatives can often make the greatest of mistakes in completing the information to be used in a death certificate—hence, my drive to find additional confirmation of any detail noted in such a record. While I am certainly willing to concede that family members are often under the greatest of emotional stress at the time—and understandably can make mistakes—I still prefer to find supporting records for each assertion built into my tree.

Now I know spelling was not the big deal it is today, and that prior centuries certainly took their liberties with spelling creativity. But Smidth? Really? I mean, after all, what more common surname could you come up with than Smith?!

That may have tipped my concern when I looked up to the previous line and realized that Kate's father wasn't Charles L. Allen, as we had been told in other records, but Charles A. Allen. Frustrating. My future research path was now sealed: I had to look for another confirmation of Kate's parents—just in case I had the wrong Kate or Charles Allen. 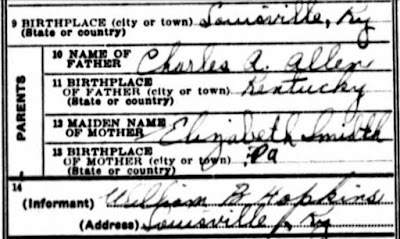